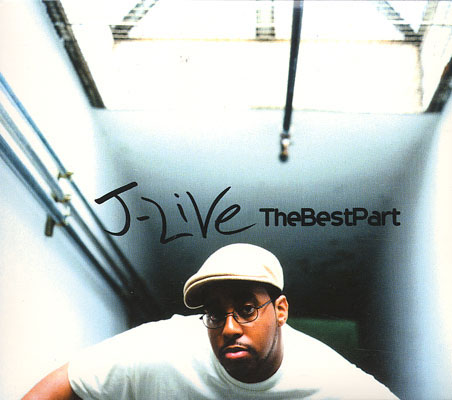 If there was ever a reason to hate the music industry, J-Live’s album is it. J’s first two singles, “Braggin Writes” and “Can I Get It” are underground classics, both selling some disgusting number of records, and they quickly got him signed to one of the smaller major labels. He then recorded “The Best Part” in full and maybe had time to release the lead single, “Them That’s Not,” before the label got bought out by a larger label (I think Universal) and, when the buy-out smoke cleared, J no longer had a contract. And, thus, “The Best Part” was thrown in the vaults. Recently, an unidentified source pressed some copies of the album on wax and everyone and their mother bought it and finally the world, besides us lucky ones who somehow managed to grab copies on the net, got to hear the masterpiece which is “The Best Part.”

Lyrically, J covers all the bases. His battle raps on tracks like “Yes,” “Don’t Play” and “Got What It Takes” are very nice. Peep the opening of the second verse of “Yes”…

“My mentality is sorta like the boomarang effect
over your head, but hits you in the back of the neck
fuckin wit Live, man, what the fuck you expect?
that’s like your girl tossin yer salad to get yer respect”

His rhyme scheme is none too intricate, but the lines are funny and his relaxed delivery is perfect. Add a strange, Wu-worthy hook (answering ‘yes!’ instead of picking one of two choices) and a really really really dope beat by Emmai Allequera…”Yes” becomes one of my favorite tracks in the last 5 years.

But J’s real strength isn’t in the battle, but in his creativity for lyrical topics. If I have a constant complaint about most underground hip-hop full lengths, it would be the lack of diversity in topics. Of 12 songs, usually 8 are battle raps, and the last 4 are divided between love for hip-hop, the rough ghetto lifestyle, a rough family life, etc. Of the 12 tracks on “The Best Part,” at most half are battle tinged. Topically, J is all over the place, giving new life to somewhat tired ideas. In “Wax Paper,” J drops a well-crafted story of two brothers in crime laced with witty rap references (“he caught 33 from a 45”). “Them That’s Not” is an ill rags-to-rap-to-riches typed story like Blacklicious “Deception,” but delivered over an unsteady beat. The tempo changes start J spitting like Twista and then allow him to settle into his normally sweet cadence. “Get the 3rd” goes in praise of relationships (“get to know the mind behind the dick that I’m slingin/next time when I’m done, yo, try not to fall asleep”). Even some of the battle-heavy joints are more interesting than the norm, such as the freakin classic “Braggin Writes,” which features J on the 1’s and 2’s while he’s spitting.

The beats are absolutely disgusting, with front to back bangers from, among others, 88 Keys, Prince Paul, Pete Rock and, of course, Primo shows up on “The Best Part” and his is probably the worst beat on the album.

To put it simply, “The Best Part” is an absolutely classic release which, unfortunately, may never see the light of day in its entirety…the recent release on wax was missing a few very nice tracks, most notably “Raw Footage” with the Cocoa Bruvuz and “Kick It to the Beat,” features fellow Seven Heads reps Asheru and Blue Black. The latter is an ingenious track about either a girl or a beat.

So, if you’ve been sleeping, go pick it up online and then buy three copies if the bullshit ends and it comes out for real.