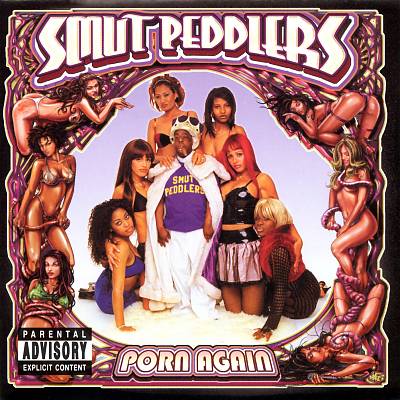 “I’m stompin on these chatroom fakes
whose hip-hop birth coincides with them cheesy remakes
You little kids playin the critics hard
Go back to your other hobby – Pokemon cards!”

Normally it’s not considered kosher to lead a story, article, or review with a quote – but in this case Eon’s rhyme from the song “Amazing Feats” hits the nail on the head. Smut Peddlers may have one of the most offensive names in rap history (three different clerks gave me nasty looks when I asked for the CD) but their whole steelo is on some “let’s get back to real hip-hop” type shit.

If it seems ironic that two guys who are as white as a Pillsbury dough boy would make such a stance, welcome to 2001. Plain and simple the truth is that if it weren’t for the in-roads made by artists from 3rd Bass to the Beasties these guys would have been dismissed before an album even dropped. Credentials were earned on indie releases though. Cage has released a series of twelve inches featuring his sickly sadistic nerd style; most notably “Agent Orange.” Eon made his name as the rap half of Rawkus group The High & Mighty with a slow-flowing style people either love or hate. Fortunately for both rappers, respect producer DJ Mighty Mi laces this album with the same kind of fat tracks that made Eon songs like “B-Boy Document ’99” hip-hop classics.

The obvious temptation when checking out this group and it’s palefaced representatives would be to assume that they are riding the shockwave trail blazed by Eminem – but Smut Peddlers defy simple stereotypes. Songs like “Talk Like Sex Pt. II” with Kool G. Rap and a year 2000 version of LL Cool J’s “My Rhyme Ain’t Done” illustrate a sincerity about rapping that’s hard to fake. Unlike wannabe rap-rockers like Fred Durst, these white boys want to be known for their lyrics and their songcraft – not just what big name rappers they can buy off to make cameos in their videos. In fact their most famous video clip yet “Bottom Feeders” features the ultimate anti-industry white rapper – “dirty fat unshaven” R.A. the Rugged Man.

One track after another features pimped out porno beats and straight up microphone rocking. The single “That Smut” features Eon and Cage trading humerous rap verses back and forth: Eon rhyming “I’m unrippable like Knicks tickets/and if your girl’s a little looser you bet E’s dick did it” while his higher-pitched partner spits out “Come and walk through this little doorway/enter the mind of Cage and a horse will shit you out on Broadway.” Another anti-industry rap cameo comes courtesy Kool Keith on “Stank MCs” when he spastic flows and drops blows like “Move you out like shipment; your producers work with Mickey Mouse equipment.”

One track after another features beats which prop up the rhymes even when you might be tempted to say, “These guys just sound too white!” How white can you sound rapping to the 70’s action movie funk of Cage’s “54” solo or the album’s introductory duet “Smut Council”? The album will undoubtedly have it’s detractors. After all, if Smut Peddlers advocated a truly “back to the old school” stance for rap, most white MC’s who built up their credentials on the indie rap scene like them would cease to exist. When Limp Bizkit acts like real hip-hop people doubt the legitimacy of white MC’s but not when Smut Peddlers represent on the mic. They drop dopeness on cuts like “Anti Hero’s” featuring Copywrite or the story-telling narrative of “Josie” with guest appearances by Lord Sear and Apani B. Fly Emcee. Even if you weren’t into their voices or flow the beats alone would make a good album – since Cage and Eon aren’t wack it’s even better.