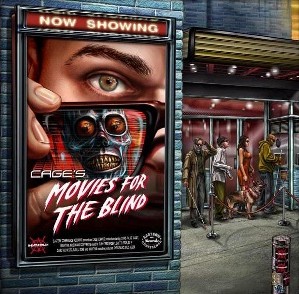 Cage :: Movies for the Blind

Is it just me or is the whole entire rap game starting to seem like Six Degrees of Eminem? It’s hard to have a rap-related conversation these days without mentioning him. So, continuing the long line of rap articles and reviews that name-check The Blonde One comes my analysis of Cage’s debut long player on Eastern Conference. ‘Cos even if you’ve never heard Cage spit before, you’ve no doubt heard of his storied rivalry with Mr. Mathers at some point. To this day, underground heads still debate which of them is the better MC. Well, with “Movies for the Blind”, Cage supporters will probably find making an argument for Agent Orange’s supremacy a whole lot easier.

“People said his brain was infected by devils.” So goes one of the album’s samples. And listening to “Movies”, I’m not so sure that statement isn’t true. Cage is one sick puppy. Deranged doesn’t begin to describe him, or this record. In fact, he’s probably the only cat that could give Necro a run for his money in the psycho department. (Incidentally, Necro is credited as being a producer here.) You might know Cage as one third of the Smut Peddlers, but trust me: this album is on some whole other shit. It’s simultaneously a joy to listen to and hard to stomach. You thought Eminem was twisted? You ain’t heard NOTHING yet. Granted, Cage will no doubt remind you of Em, both lyrically and musically, but he definitely takes the mentally-ailing MC act to a new level. I’m not ashamed to say that I am scared of this guy. After hearing some of these tracks, you would be too.

Ever seen the movie “A Clockwork Orange”? Well, imagine what it would have been like had it been produced in part by people like DJ Mighty Mi, El-Producto, J-Zone, the aforementioned Necro, and more. Then, multiply the ol’ ultraviolence by about triple and you’ve got “Movies for the Blind” in a nutshell. Horrific? Damn right it is. Entertaining? As FUCK!

Cage manages to do what only great MCs can do well; that is, tell a story with his raps. Combining gruesomely vivid imagery with hilarious punchlines, Cage has cooked up a formula that works well. Kinda reminds me of another rapper I know – Em-something? Topics range from failed suicide (“A Suicidal Failure”), to mass, cold-blooded murder (“The Soundtrack”), and even monologues from inside a mental institution (“In Stoney Lodge”), with the latter allegedly being based on true events. But like any good horror movie, Cage enthralls the listener while disgusting them. Because of his ability as an MC, the album truly lives up to its name. Peep this excerpt from “Escape to ’88”:

“Too bad no planes flew into MTV…
I’ll never get a platinum plaque for MP3’s
Bein’ blackballed by a white MC
Pauseâ€¦ I guess that faggot found the right MD
And I’m twisted, but not like faggots who suck fame
This clown’s insane â€“ I’m sicker with metal than Mudvayne”

Shit like this shouldn’t sound as nice as it does. Expect also to hear Cage “rip off all your flesh and make an outfit” or “fuck your head up like getting cornrows from a blind giant”. All the while, he’s blessed with production that, in general, has that cartoony, dreamlike feel but with ominous undertones. Cage himself isn’t the only thing twisted about this record; but like the man himself, the beats will keep you hungry for more.

“Too Much” sounds like low-budget Timberland in the early ’90s, “CK Won” has a driving bassline and a strangely catchy hook, and “Holdin a Jar 2” has the kind of cacophonous beat that’ll make you bob your head and give you a headache at the same time. Oh, and you KNOW Cage was gonna include that booming “Cage Wins!” sample from Mortal Kombat, right? You bet he did — right at the very end. Nice touch.

Actually, just about the only disappointing thing about this record is “Unlike Tower 1” with Mr. Eon and Copywrite. As expected, all three verses on the track are tight as hell, but the beat and chorus are nothing if not uninspired. This sucks out the replay value I was sure that track would have, but the rest of the album is good enough as it is.

Inevitably though, Cage will continue to draw comparisons to Eminem. But is Cage really a more talented MC than Eminem after all? Nah. I still say Marshall’s one of the best emcees alive — very few can best him in a rhyming contest. But I also say that, ironically, “Movies for the Blind” is much more entertaining pound for pound than “The Eminem Show”. Hard for you to swallow? It might be, but then, so is “Movies for the Blind” itself. Looks like the debate continues.