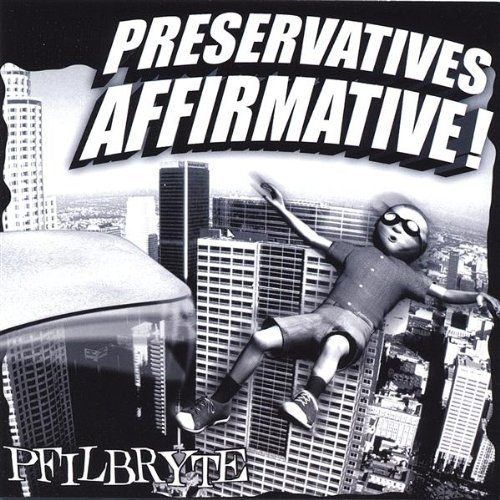 Being an open minded kind of guy, I’d like to think I can get into any kind of music if it’s good. Even though 95% of my collection is hip-hop records, I’ve still got the occasional curveball in the form of a Bjork, Janet Jackson, Megadeth or Beenie Man record. They have nothing at all in common, except for the fact I heard the shit once somewhere and thought “Hey, not bad!” In fact I sometimes secretly fiend for a rap producer to come along and sample some Megadeth the way that Muggs freaked a sample of “The Wizard” by Black Sabbath for Cypress Hill’s “I Ain’t Goin Out Like That.” Just come along, do something nobody else would, and freak it.

In this tradition comes an artist whose name is Phil Bright, a funk rocker who has some legitimate hip-hop roots due to his participation on Kool Keith’s “Dr. Octagon” album. Bright is one of those people who is too multi-faceted to pin down to any individual degree of the funk – he plays the instruments, he lays down the raps, he DJ’s, he produces – he does everything except allow himself to be categorized. The result is an album called “Preservatives Affirmative!” – but my feelings about it are just as mixed as the blend of styles and instruments found throughout.

There’s a lot of reasons you may really enjoy this album. Bright has a quirky sense of humor throughout his songs that Prince Paul fans would recognize. “I Like Beer” is obviously over the top on purpose; a song which sings the praises of Comedy Central’s “The Man Show” where Bright and his party friends would try to outdrink legendary Bill ‘The Fox’ Foster (R.I.P.) The perverse rap of “King Cole” would be perfectly at home anywhere from a Kool Keith album to an episode of the Howard Stern show. There’s also some jams which have nothing at all to do with hip-hop, such as the alternative groove of “The Happy Cat” and a song incorporating pieces of guitar rock light and heavy into a phone call from Jesus entitled “Believe Me.” There’s a little bit of something for everyone.

And actually, I think that’s why the album doesn’t overwhelm me at all. Diversity is divine, but within diversity there can still be consistancy. The only thing you can consistantly expect from Phil Bright is that one track is not like the next, and there’s no unifying theme to the album. It’s not urban enough to be hip-hop or folksy enough to be alternative or hard enough to be rock – it’s all of them at once and just too much to absorb. If Bright had made an album of Dr. Octagon-esque beats and raps that his bio and his label’s website both make a big deal out of it would probably appeal to hip-hop fans; but even to people who like their music eclectic the diversity of “Twinkle Twinkle” (sounding like The Beatles) or “The Answer” (think Lenny Kravitz) may just go too far. Genius? Perhaps. But it doesn’t really rap, rock or roll to this reviewer. When Bright does an all hip-hop album I’ll check back – he’s got the skills, I just wish he’d find his niche.