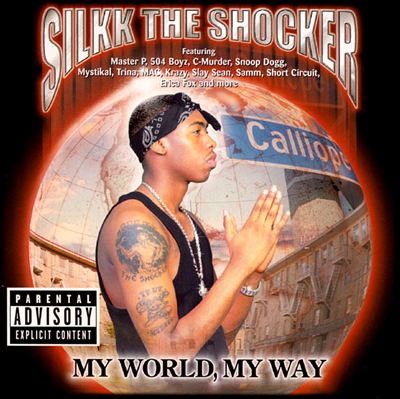 Silkk the Shocker :: My World, My Way

Silkk the Sinatra? Like Big Frank before him, the Shocker is going to do it his way, not your way. And after years of making hits for his bigger brother Master P on No Limit Records and winning over fans with cameos on everybody from Mya to Mystikal’s albums, it does seem like it’s time for him to declare “The world is mine, and everything in it!” a la Nino Brown or Scarface.

Silkk’s time to shine though comes in the new era of No Limit – an era which has left behind the hit-making production of Beats By the Pound. This era has split No Limit’s fans into two different camps – one who believes the artists can do no wrong no matter who does the beats, and another who wants to believe in No Limit even though the sound just isn’t what it used to be.

Silkk’s new album falls somewhere between the two. On the one hand producer Myke Diesel, who has a hand in ten out of the album’s twenty actual songs (twenty-three tracks) is certainly trying as hard as he can. Helped by Silkk’s spastic and energetic flow, songs like the dark “Funny Guy” and Isley Brothers influenced “Go Down” do have some punch. Still, “What I’m Looking For” sounds like a farting keyboard mixed with a slowed down “Triggerman” beat; while “Executive Thug” has a simplistic up and down piano riff and clap track that obviously didn’t inspire Silkk at all. The best Diesel track might be “I Wish” – a xylophonic beat for Silkk, Snoop and P to preach to the young not to join “the life.” With the addition of the little kids chanting “I wish I was tall like you, I wish I could ball like you” some might feel the song bites from Skee-Lo’s “I Wish” but the result is still charming and dare I say cute!

The album’s better tracks tend to come from the other collaborators. The first single “He Did That” was produced by XL and has the right amount of symphonic beauty and thuggish bass mixed together. The somewhat over-the-top “Pop Lockin'” by Soopafly works just because guests Snoop and Goldie Loc make the beat so pimpish. Carlos ‘C-Los’ Stephens does beats on four tracks, the best of which is probably Silkk the Shocker and Mystikal’s “Them Boyz” – a track that will be mistaken for “It Ain’t My Fault 3” even though it’s really not.

This release has a serious problem building up momentum. Every hot track seems to be followed up by a mediocre one; suggesting that perhaps the album was just a little too long even though the label was probably trying to compensate for how many times the release was delayed. Master P continues to shout on the title track about “Gomer Pyle niggaz” who left No Limit thinking the grass was greener on the other side, but it may actually be when one of No Limit’s hottest rappers turns out a mediocre album. Instead of worrying about who left he ought to worry about who does the beats – make sure the product is tight. The formula is beginning to get cliched to – every No Limit album has to have one “touching song” like Silkk’s “What’s Heaven Like” and even though it’s good, it’s getting old. No Limit needs fresh blood and hot tracks like what appeared on P’s “Ghetto Postage” – he seems to have saved all the good shit for himself though.