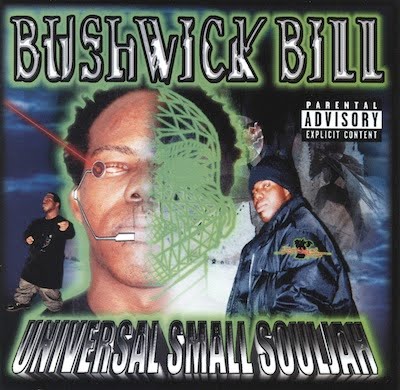 “Universal Small Souljah”? No, it’s not some No Limit kid soldier flexing his war face, it’s the one and only Little Big Man of rap music, Bushwick Bill, coming back in 2001 after an odyssey of solo and group ventures. “Universal…” marks the second release after his departure from the Geto Boys and Rap-A-Lot. During his 3 years of absence, a new breed of rappers from Down South blew up big, leaving veterans like Bushwick looking for the remains of their earlier fame. I wish he would find them, but I honestly doubt this album will put him back on top of the game.

The album’s intro reminds everybody that where there’s Bushwick, there’s drama. Over a decade ago Bill successfully portrayed the nutcase by taking hints from both real-life (Jeffrey Dahmer) and fictional (Jason) maniacs. By putting their tales into rhyme and reason he somehow convinced you that he actually was on a mission to accuse society of creating such monsters. He eventually ventured deeper into the realm of rap’s possibilities as he transformed into the ‘Phantom of the Rapra’ and went philosophical on that ass on the album of the same name. Nowadays, not much is left of his sick genius. His former self pops up in “Bushmotherfuckingwick”, while the dazzling Dr. Wolfgang Van Bushwicken the Barbarian Mutha-Funky Stay-High Dollar-Bill-stir moniker he adapted in “Phantom of the Rapra” only gives a clue to the title of the posse cut “Dr. Wolfs Gang,” which shamelessly jacks Swizz Beatz’ production style.

The album does indeed lack in the originality department. It’s evident its makers were looking for the phrase that could become a catch phrase (“Like What”), looking for the beat that would have clubs crunk (“Sex on the Floor”). With only one beat that’s truly original (“Groupie Bitches”), it won’t happen.

If Bushwick would have followed the path of last year’s single “Unforgiven” (b/w “Sex on the Floor”), this album might do justice to both the rapper and the year of its release. Instead, he thinks he can get over with renaming 5 cuts from “No Surrender… No Retreat” and including them on “Universal Small Souljah”: “My Bitch” turns into “U Gonna Be My Bitch”, “P. Funk” into “Money Make Me Cum”, “Stand by Me” into “When The Nite Falls”, “Hood Rat” into “Modern Day Play”, “2 Hard 2 Test” into “Coming With That Shit”. This will only matter to die-hard Bushwick fans, and some of these cuts are not that bad, but still… What was it: Not enough time? Not enough money? Not enough ideas? Whatever it was, it’s a poor account of this man’s capabilities.

If Bushwick Bill would still be on Rap-A-Lot Records, this would be a different album. Sometimes, what executive and musical producers lack in artistic vision, a rapper can make up with his lyrical skills, with interesting subject matter, with his charm and charisma or just his hunger to make it in this rap world. Bushwick’s delivery on this album lacks all of these qualities. Add to that a copy-cat production style and too much mostly East Coast-sounding guest rappers, and you have “Universal Small Souljah”. It’s time for another Geto Boys reunion album.