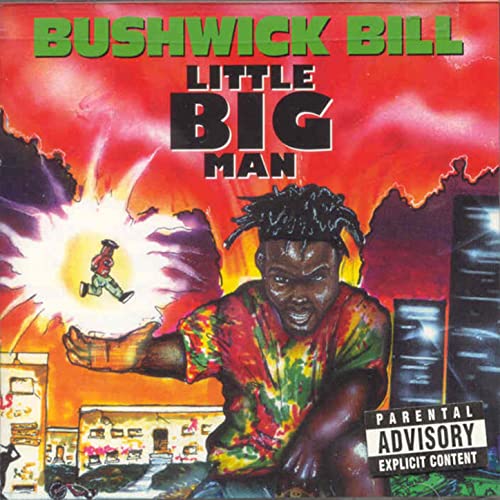 Nothing came easy for Bushwick Bill. Born in Jamaica and raised in the Dirty South, Richard William Stephen Shaw was dealt the double hand of dwarfism and institutional racism, so for every rung of the ladder he was able to climb someone was waiting to kick him two rungs down. Even though he battled depression and drug abuse for most of his adult life before his untimely passing due to pancreatic cancer in 2019, that didn’t stop him from achieving the heights of fame and success while alive. After starting out as a dancer for the Geto Boys the name of Little Billy, his natural charisma and lyrical ability elevated him to a full fledged member of the crew. The infamous cover of “We Can’t Be Stopped” thrust him further into the spotlight, showing him on a hospital gurney flanked by his teammates shortly after a bullet left him with only one eye. This would in turn lead to a single on his first solo album.

“See, most of my life I never had shit
I felt like an outcast, treated like a misfit
Damn near didn’t make it on my day of birth
Thinking was I really supposed to be on this planet Earth?”

“Ever So Clear” was a reference to the fact Bill was drinking Everclear at the time of the incident, a very high proof alcohol that’s going to get you messed up really fast. The single set the tone for “Little Big Man” nicely. Bushwick Bill wasn’t going to apologize for his life or his height. He was going to take every negative experience he had in his life to that point and find a way to turn it into a positive through music, something he poignantly explained on the album track “Copper to Cash.”

“When I started writing lyrics it was like a religion to me
cause when I seen the mic, you’re fucking right, I was kicking it, G
Knew that it was somethin that was gonna last a lifetime
when I pushed my homework aside so I could write rhymes […]
I remember scraping up pennies for the four-double-oh-Z’s
Now my refrigerator’s full of Olde E
I used to only rap on the schoolyard
Now I’m in the studio dropping lyrics too hard”

Bill faced constant scrutiny thanks to the attention his diminutive stature and provocative lyrics combined together brought him. He uses the “Intro” of the album to address those critics, having an actual conversation with one of them and rebutting every point they make. When said critic suggests he should be “shut down” by the U.S. government and deported, he wastes no time making his feelings clear. “Man fuck the government man! Cause all the government know how to do is not govern — but how to add up and subtract my black ass from what’s rightfully mine. Fuck that shit.” He also gets in a few wisecracks. “How tall are you?” Critic: “Six two.” Bill: “Damn, I didn’t know they stacked shit that high.”

What’s even more telling is that by the end of the track he’s won his critic over, as he says with admiration “Dang, you are the Little Big Man.” True indeed G. The one group he’s not winning over though is the Klan, as he gets a note from them that proves “these peckerwoods ain’t frontin'” in “Letter From KKK.” What might catch you by surprise though is that it’s a call for black pride and uplifting the community, as Bill says the Klan celebrates every time there’s another incident of gangbanging or black-on-black crime. Naturally Bill has his own solution.

As one of the progenitors of horrorcore rap though Bill still had a reputation to uphold, one he’s happy to do by once again adopting the Chucky persona for a sequel called “Chuckwick,” inviting Ganksta N-I-P to enjoy the mayhem with him. As fun as this is I prefer the album’s closer “Skitso” for showing us “what goes on in the mind of Bushwick” set to some incredibly smooth Lonnie Liston Smith samples. That’s right — the king of smooth jazz made Bushwick Bill sound even more psychotic. Bill’s lyrics reverberate and echo off the walls of the studio perfectly. I’ll even forgive him for recycling his lyrics from Kool G. Rap’s “Two to the Head” at the end.

If you’ve gotten the impression I’m a fan of “Little Big Man” you’d be absolutely right. There are a few moments where his “hardest little bastard in the world” persona can wear out its welcome (including the title track) but at 12 tracks totaling 52 minutes the album doesn’t wear out its welcome. While everyone knew Bushwick Bill was a force to be reckoned with as one-third of the Geto Boys, no one knew until his solo debut that he has the force of will and intellect to carry an album on his own. The production from the likes of John Bido, Crazy C, Roland, Goldfingers J. Prince and Mike Dean was all he needed to show and prove it, and on “Little Big Man” he showed there was much more to Richard Shaw than met the eye.