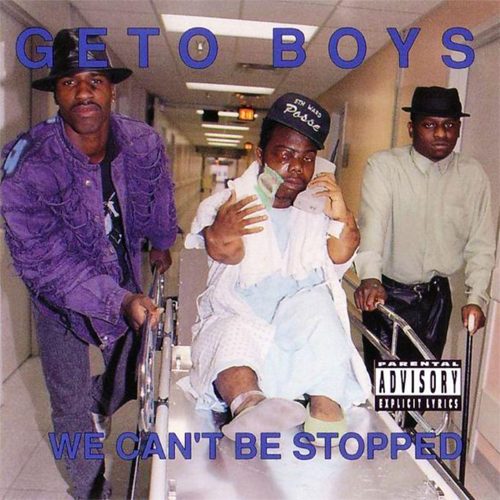 We Can't Be Stopped

Geto Boys :: We Can’t Be Stopped

“I sit alone in my four-cornered room starin’ at candles”

Ahh, the Geto Boys. Where to begin? Perhaps the best place to start this review is to recall a debate from decades ago. Those born after 1991 won’t be able to answer this question; hell, those born after 1981 probably won’t either since the subject of this debate was not music meant for ten-tear-olds. Nevertheless this question was raised during my teenage years – which rap act was legitimately “The World’s Most Dangerous Group?” N.W.A had claimed the title for their own, and without a doubt their CD’s caused many retailers to add ADDITIONAL warning stickers saying you had to be 18 or older (with valid ID) to buy. The funny thing about it was that those stickers helped CREATE the debate, since compact discs and tapes from 2 Live Crew and the Geto Boys carried the same “18 and up” stickers as N.W.A. 2 Live may have had the best argument since they were fighting on the front lines of the 1st Amendment, protecting their right to free speech in America no matter how salacious it was.

Then again the trigger-happy, motherfuckin, Geto Boys were perhaps the only group before or SINCE to have a warning label from THEIR OWN LABEL on an album stating that the views expressed by the artists were not those of the parent company. Anything offensive you could think of the Geto Boys would talk about – lewd and lascivious acts, misogyny, brutal murders and body mutilation were all fair game. To their detractors the Geto Boys were offensive just for offensive’s sake, with no musically or lyrically redeeming qualities to their work. Many of those critics found that the cover of 1991’s “We Can’t Be Stopped” made their point for them. Bushwick Bill is being rolled down a non-descript hallway dressed in a hospital gown, flanked by Willie D and Scarface on either side, talking on a cell phone. That doesn’t sound so bad until you realize the photo was taken after BUSHWICK TRIED TO SHOOT HIMSELF AND BLEW AN EYE OUT. In fact it seems as though Bushwick purposefully pulled the bandage off just as the photographer snapped the picture, just to make the visual of a bloody red socket where his right eyeball should be that much more gruesome. N.W.A would be hard-pressed to argue they were more dangerous to themselves or others than the Geto Boys, and the Boys themselves would have a hard time arguing for their work’s artistic merit as opposed to being sold simply on shock value. The lead single “Mind Playing Tricks on Me” not only answered those critics but left an indelible mark on musical history.

Scarface: “Day by day it’s more impossible to cope
I feel like I’m the one that’s doing dope
Can’t keep a steady hand because I’m nervous
Every Sunday mornin I’m in service
Prayin for forgiveness
And tryin to find an exit out the business
I know the Lord is lookin at me
But yet and still it’s hard for me to feel happy
I often drift while I drive
Havin fatal thoughts of suicide
BANG and get it over with
And then I’m worry-free, but that’s bullshit
I got a little boy to look after
And if I died then my child would be a bastard
I had a woman down with me
But to me it seemed like she was down to get me
She helped me out in this shit
But to me she was just another bitch
Now she’s back with her mother
Now I’m realizing that I love her
Now I’m feelin lonely
My mind is playin tricks on me”

Through four intense verses the Geto Boys spit tales of paranoia and woe over an Isaac Hayes loop now is more closely identified with this song than its own origins. The lyrics are Murphy’s Law, The Twilight Zone and Nightmare on Elm Street all rolled up into one. Scarface’s opening lines in verse one are still haunting: “At night I can’t sleep, I toss and turn/candlesticks in the dark, visions of bodies bein burned.” The Geto Boys aren’t just telling a story on this song, they are literally making you see through their own eyes the horrorshow as it unfolds. Willie D believes he’s being hunted down by rivals only to find his delusion dissolve and reveal three geriatrics. Bushwick Bill decides to get some Halloween revenge on a stalker only to find him gone and his own fists bloodied from punching hard cement. Scarface’s tormentor wears “a black hat like I own/a black suit and a cane like my own,” suggesting that in his disturbed visions he is persecuting HIMSELF. If I ever write a book about the greatest rap songs of all time this is clearly going into the top ten. It’s not just the paranoid poetics that make it great, it’s the passionately emotional delivery and the eerie combination of haunted raps to beautiful beats. This song said everything the cover of “We Can’t Be Stopped” could not – these men were ARTISTS.

“We Can’t Be Stopped” doesn’t rest on the laurels of its chart-topping single though. Weak moments on this album are few and far between, and the only entirely unnecessary track on the whole LP is the “Rebel Rap Family” intro. The album’s title track is an attack on their former record distributor and the music industry as a whole, summed up nicely in four sentences by Bushwick Bill. “Can you believe those hypocrites? Who distribute Guns ‘n Roses but not our shit? And they say we’re a racist act/Ain’t that the pot calling the kettle black?” Willie D gets a nice potshot of his own in towards the end though, noting that they reached top ten in album sales with virtually no mainstream exposure. “You can’t beat that with a bat; HUH, Hammer can’t touch that!” It’s that same kind of unapologetic smugness and braggadocio that informs this entire album from start to finish, closing with the triumphant “Trophy” where the Geto Boys flip a middle finger to music industry awards and pay tribute to themselves.

Willie D: “Yo Flav, I give a fuck about a God damn Grammy
But them motherfuckin hoes won’t hand me one
At least you was invited by the bigots
The motherfuckers told me to buy a ticket!
To their phony ass ceremony
Fuck Oscar, Emmy, and Tony!
Cause when it comes to award time
Niggaz be standin on the God damn sideline
I’m loadin my nine, cause I got a lot of grudges
I’m ’bout to take out the judges
Willie D won’t shit ‘cha, but hit ‘cha
Take a look at the overall picture
Every year it’s the same old story
Same faces, same categories
I sold a lot of records and a lot of people know me
NOW WHERE’S MY GOD DAMN TROPHY!”

Classic beats go with raps ranging from funny to morbid to downright twisted. Everybody from Zapp to Funkadelic can be heard in the background of “Homie Don’t Play That” while the money-making anthem “Ain’t With Being Broke” is looped to the Fred Wesley and the JB’s “Damn Right I’ma Somebody.” The Geto Boys alternate between solo songs and group outings without missing a beat, giving Bushwick Bill the chance to explore his horrorcore side on “Chuckie” and Scarface the chance to get a “Quickie.” Neither of these songs would provoke as much ire as Willie D did with “I’m Not a Gentleman,” a vicious rebuttal of Queen Latifah and Monie Love’s “Ladies First” where D clearly lays down his code of ethics for male/female interactions that would leave Hillary Clinton’s jaw on the floor.

“I’m not a motherfuckin gentleman; I told you that in the first rap
Hell naw I won’t remove my cap
When I go to ya moms crib it’s on my grill
T-shirt, sneakers and jeans is how I feel
Your mom grit her dentures
Cause I’ll be eatin with my hands, not the proper utensils
I say yeah, naw, not ma’am
I was raised like that, so that’s the way I am
I don’t give a damn if you ain’t got a seat
My feet hurt too, you ain’t no better than me
Stand yo’ ass up, wait your fuckin time!
I don’t give a fuck if you 9 or 99
Drop somethin if you want to freak
And I won’t leap to pick it up like a geek
In a dash or flash, God damn, I’ll pass
I’ma let you bend over so I can see dat ass
I might laugh, giggle, or grin
You can say Willie D is, out to win
People say my manners are minimal
I’m from the ghetto hoe, I’m not a motherfuckin gentleman!”

Out of all the solo tracks though my quintessential favorite is Bushwick Bill’s “The Other Level.” While 2 Live Crew’s songs were frank in their sexuality and admittedly misogynistic in their delivery, Bushwick’s tale was set to a slow and subtle quiet storm groove in which he coyly and playfully got two women to engage in sexual acts they would have never considered on their own. Parental discretion is DEFINITELY advised!

“I make them both suck on my chest like Mr. Slick
Then I took one’s head, and pushed it down to the dick
Now I got one on the dick, one on the nipples
Squeezin on they asses, the shit is so simple!
Then another smooth move real quick
I pushed the other bitch’s head down to the dick
Now they’re suckin on my dick like a lollipop
In and out of each other’s mouth, when will they ever stop?
Oooh! Suckin on my pole; and while they suckin on my pole
I’m runnin my fingers through their pussyholes
Then back up to the chest again – YES!
Everything is cool, cause I’m the best my friend
Now they’re lickin on my chest, my nipples rather die
Jimmy pushed both of their heads together
Now they kissin one another – oooh!
Fifty minutes later, they were eatin each other
I got these bitches so much into themselves they forgot about me
And I’m sittin here, butt-motherfuckin-naked G
But after time went by, yo
You know a nigga like me, had to get down for mines
And I shoulda won a fuckin medal
For takin both of these bitches, to the other level”

“We Can’t Be Stopped” lives up to the name as the Geto Boys move beyond their previous rep for being controversial into songs on every topic imaginable, even taking time to debate the value of conscripted military service on the brashly titled “Fuck a War.” It’s intriguing just how relevant that track is in 2008 considering how long it’s been since this album came out. With production ranging from Johnny C to John Bido and all of the Geto Boys themselves and raps that still qualify as hardcore even in an age where 50 Cent’s mainstream success has raised everyone’s tolerance for the graphic and profane, “We Can’t Be Stopped” proves not only to be a timeless album but perhaps the greatest in the group’s catalogue. In a year in which many artists claimed to be dangerous, the Geto Boys owned 1991 like no other.