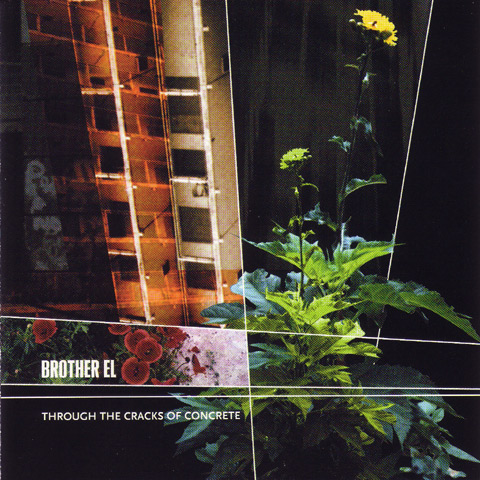 Brother El :: Through the Cracks of Concrete

There’s something a little bit different about this Brother.

Rap artists usually get tagged with labels that help a fragmented purchasing audience decide if it’s a good fit to their lifestyle: gangsta or concious, political or party-groove, thug or backpacker. Although it’s cliche to describe an artist as “defying the conventional stereotypes” it really is true in Brother El’s case. The closest kin to his vision of hip-hop would probably be Saul Williams; although Williams is best known for using the power of his voice and words to transcend the beat. Brother El has that same sense of deep poetry in his lyrics, but rather than going around or over the beats he seems to almost melt right into them.

There’s no denying that El and this album are on some other shit. Tracks like “I Just Wanna Hold Your Hand” are not what a lot of us have come to expect in a rap world flowing with champagne and expensive jewelry, but there’s no denying his deep introspection. El starts the track with the admonition “I need to concentrate.. just gon’ practice my breathing.” Lush harps and flutes play in the background as you feel El literally sucking up the courage to discuss the emotions he felt in a difficult male/female relationship:

“Even though I tried to keep my composure
Knowin that I owed you hella loot
Huh, and no such funds just to even go Dutch
The pressure on my man it was way too much
Therefore I didn’t know how to act
Tryin to be a man while ridin on your back
I was embarassed every time your girlfriends bought you fine items
I just wanted to be like them..”

In a world of short attention spans and instant gratification, El’s album seems to directly challenge the hectic pace of life. Lush and almost trance-inducing instrumentals like the opening “Jungle Chant” and the superb “Protection of the Child” drift you off into a thoughtful world of head-nodding appreciation. But just as you’re about to lump Broter El into a world populated by Erykah Badu and Talib Kweli, you’re attacked by the straight up rhymes and hard slapping bass of “Fade It.” El’s lyrics aren’t any less crafted – but it’s a more uptempo tale of survival on Chicago’s gritty South side.

“Facin the cold streets, dark nights, and gang fights
over, territory, that ain’t right
I might, just step back and react on a different plane
Change the slang, watch the devils go insane
cause they don’t understand a damn thang
Life ain’t the same when you use your brain”

True dat. Brother El’s “Through the Cracks of Concrete” literally lives up to it’s title – using spacey and jazzy instrumentals and El’s subtle Midwestern mellow voice to push your mind past the walls of the physical and mental world alike. Whether El will be able to find his market for this album is the crucial question. There’s no question songs like “It’s Amazing” and “Pay Close Attention” are profoundly spiritual (and dope) hip-hop, but it may miss the mark with people who expect tracks to slam like M.O.P. or groove like OutKast. People who try to lump Brother El into a category will probably stick him somewhere between Aceyalone and Jessica Care Moore, but he’s all that and then some. If you’re ready to expand your notion of what hip-hop music is, this may just be be the album you were waiting for.