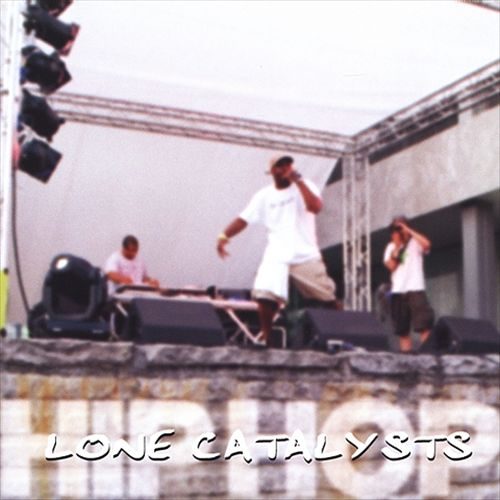 You may already be familiar with half of this dynamic hip-hop duo, even if you didn’t know it. Producer J. Rawls created an instant hip-hop classic with the music that laced “Brown Skin Lady” on the Mos Def & Talib Kweli “Black Star” album. While it never blew up as a single, the beautiful ode to the beauty of nubians was universally hailed in the underground as a classic which found repeat play in headphones worldwide. Building on the credibility of this success, Rawls joined forces with his man J. Sands to create the rap duo Lone Catalysts. If you look up the word “catalyst” in a Merriam-Webster dictionary you’ll probably find among the definitions the words “an agent that provokes or speeds significant change or action.” Rarely has a rap group’s name ever been so simultaneously profound and true.

As an indie rap group in a hip-hop industry that at times seems in desperate need of needing to make significant changes and fast, the Lone Catalysts provoke exactly the kind of head-nod that too many mediocre rap tracks are lacking. Sands well executed, on-tempo, smooth flowing vocals combine with Rawls beats in a way that can only be described as bliss. First person narratives like Sands’ rap on “Ill Technique” will have you pressing rewind again and again to catch the whole story, as Sands leaves no picturesque detail undescribed:

“The story goes, Rawls in the lab eatin Oreos
Waitin on me to show, he got a track and need a pro
Usually have some tree to blow, but nowadays I leave or go
when it’s time to breathe a flow, even though
you might see me in your sec-tion, eyes red complexion
with my man, Hemy D and El G flex-on
You know that, so finally the destination
I’m at the lab with Rawls and without no hesitation
MY MIC SOUNDS NICE, CHECK ONE..”

The thing that’s truly mind-blowing about this track though is how Sands actually opens it by having an argument with his girl about needing to go to the studio to make tracks with Rawls. Some might say he’s a damn fool – she’s got guiet storm music playing, a table set for dinner and all, and he still wants to go make music at the studip. That’s exactly why this album is titled “Hip Hop” though – for J. Rawls and J. Sands, the love for the music comes first above all else. That comes through over and over again, on smooth tracks like “The Pro’s” and “Due Process” with Talib Kweli and ‘Rubix’. Trying to find a weakness in the beats and the rhymes is like trying to escape a Chinese finger torture puzzle – the more you pull it apart the more tightly it holds onto you. Instead of trying to fight it, you should just give in and go along for the ride. Some raps like “Xtinction” and “If Hip Hop Was a Crime” have a political edge; others like the mega-smoothed out “The Place to Be” are just for the groove, where again it’s the laid-back and easy flowing narrative of J. Sands that makes it a winner:

“Aiyyo, have you ever been in the place to be?
You know the spot where the DJ’s and MC’s
make the fly girls wanna move their bo-dies
All the fellas gettin nice off of Ba-cardi
Very cold outside of the par-ty
But inside, it’s goin off like Biz-Markie
well check it out y’all..”

This already dope album is in fact laced with six extra “bonus tracks” if you open up the liner notes and check the full list. From the piano-tinged “Politix” to the humerous “Live at Nkiru Bookstore” to the self-titled track “Lone Catalysts”, each of these extras is not really extra at all but just another helping of mashed potatoes and biscuits to fill that hunger for dope hip-hop. By the time you finish with “Paper Chase” finale which remakes MC Lyte’s classic “Paper Thin” you’ll have such a good hip-hop groove it will cause cold tingles down your spine. J. Rawls and J. Sands are indeed the Lone Catalysts for hip-hop in Y2K1, so don’t miss the spark on what they’ve done – add this dope record to your collection.