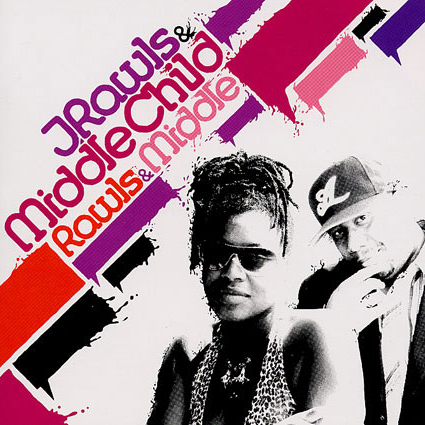 The man behind Black Star’s “Brown Skin Lady,” J. Rawls has developed a style and a list of production credits to blow you away. Having worked with J-Live, Asheru & Blue Black, El Da Sensei, and his own Lone Catalysts crew, among others, Rawls has earned a spot as one of the best, least recognized beatsmiths doing it right now. As his press release states, Rawls’ production spans “hip hop, soul, nu-soul and jazz sounds,” making his beats ideal backdrops for artists of a variety of musical persuasions.

As the story goes, Rawls hooked up with R&B crooner Middle Child somewhat serendipitously, as her manager happened to be nearby when Rawls needed someone to sing a hook. After collaborating with her on his “Essence of Soul” project, he decided a full scale LP was the next logical step, and the result is “Rawls & Middle,” a collection of gorgeously layered, beautifully imagined beats that also happen to have some singing on them. That’s less a shot at Middle Child than an acknowledgment of how far and away most vocalists would be surpassed by production of this quality.

Rawls and Middle kick things off with a jazzy intro of scatting and name-dropping over whispery keys and crisp snares. Rawls carries the mood over to the next track, “Til The Sun Comes,” a vibrant concoction of a longer jazz guitar lick and a pulsating kick drum. This is not your standard one or two-bar sample, looped ad infinitum. Here, as elsewhere, Rawls builds a full-bodied musical composition out of expertly chopped source material, luring you in with a four-bar phrase that repeats just enough times to get you vibing only to switch up with a newly elaborated section that takes the song to a whole new level. By the time you get to the hook, you’re lost in Rawls’ musical realm.

Other mid-tempo gems include the Latin-inflected piano bass line of “Lovers On A Stroll,” which is accented with syncopated shakers and occasional keyboard flourishes; “Thankful,” with its mÃ©lange of percussion and vinyl-scratching highlights; and the acoustic guitar-driven “I’ll Be Waiting (Sophie Redux),” which is set off by hand claps and subtle vibes.

For her part, Middle Child proves herself to be an unpretentious (read: minimally embellished) vocalist whose greatest asset is her ability to keep it simple, since, when paired with music this lush, it’s not really necessary to overdo it. She has decent vocal chops and crafts succinct melodies which complement Rawls’ beats, even if they don’t tend to get stuck in your head for days on end. Her subject matter is typical R&B fare, meaning that it’s mostly concentrated on love and relationships, although she does convincingly switch things up from time to time, as on her ode to the musical muse, “Music Over Madness.” One of her more memorable performances comes on “Useless,” and it accompanies one of the more subdued beats on the album, which is perhaps what allows her vocals to take center stage. Early on, she reflects, “If that thing you love you don’t respect, you will lose it,” and she goes on to offer examples of the different ways you can ruin a good thing by overlooking something closely related, as when she comments, “You can love shiny rims in the summer time, yeah / But if your muffler is fallin off, dude / Your ride is use-less.”

Rawls and Middle combine best on the slower jams, including the stand-out track “Can I Be Real?” J. Rawls weaves together slow, sultry horns, whistling synths, and start-and-stop drums to create a seductive bit of vintage goodness that is perfectly topped off with the crackle of an old record player. Middle Child’s vocals slither all over the beat as she explains to a romantic partner how her ex has re-entered the picture. “I didn’t set out to deceive you,” she murmurs, “in fact I really dig you.” “Don’t Lock My Drummer Up” is another slow burner composed from a bluesy chord progression and ?uestlove-esque drums, where Middle Child begs the one-time to let her percussionist off the hook: “See my people get emotional / But you ain’t gotta start a motion, though / Everything on the scene is clean / Please don’t be mean / I need this cat on my team.”

The only real miscue on the whole album is some wack rapping from Middle Child on “Get It On (Get Ghost),” but it comes with an awesome beat of sixteenth-note piano octaves and singing electric guitar notes. Plus, it only lasts about a minute and a half, so it’s easily forgiven. The other heavily hip hop-influenced track, “Kick in the Door,” fares much better. Rawls mixes in more tasty acoustic guitars and neck-snapping drums, guest MC Wallabee kicks some good rhymes, and Middle Child incorporates classic Biggie into her melodious hook: “Kick in the door wavin the fo’-fo’ / Used to rock the dance floor, yes we used to flow / Now all we do is blow dro, what are we here for?”

This is an outstanding album musically, as J. Rawls does everything right behind the boards: the samples are chopped to perfection, the songs are beautifully structured, and the drum tracks are constantly fresh. It’s hard to match such virtuosity vocally, but Middle Child succeeds by smartly opting to play it low-key. She may not convince you right away, but she will certainly win you over with repeated listens. It’s a promising start for this new name in the R&B game and another notch on the belt for one of hip hop’s criminally overlooked musicians. J. Rawls has perfected “The Essence of Soul” with this one.