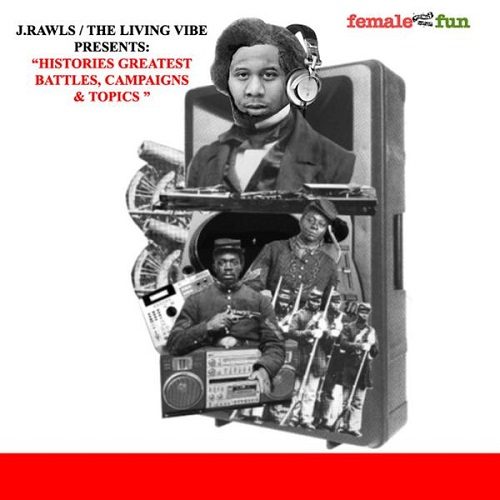 There’s a reason why beatmaker J. Rawls isn’t surrounded with hype like some of his producing peers, and it’s a simple one. His music maintains one of the lowest profiles of anyone in hip-hop ever considered worthy of dropping an instrumental LP. Still, there is something about his bass-filled, buttery creations that makes one take notice. As long as it may take to warm up to his beats, they contain a deep-core heat that isn’t used up after a few listens. While other people’s beats erupt and explode and are hot for a minute, a J. Rawls track simmers, thickening its ingredients into a viscous slush whose organic odor is able to chase away the perfumy scent of artsy neo soul, the acidic stench of industrial indie hip-hop, and the sugary smell of commercial cotton candy rap. Or so I thought until I listened to this album.

After supplying MC’s with beats for his group projects Lone Catalysts (“Hip Hop”) and 3582 (“The Living Soul”), as well as his own “The Essence of…” compilation, Rawls drops his first instrumental project on Female Fun Records. Its long-winded title “Histories Greatest Battles, Campaigns and Topics” refers to the political and historical theme Rawls has chosen to validate his solo venture with. The majority of the tracks allude to certain historical events, some of them contain vocal samples from interviews, speeches and broadcasts. “The Black Brigade of Cincinnati (Outcome)” features Fat Jon of 5 Deez playing the flute over a simple drum/bass arrangement sprinkled with the odd piano drop. Too bad they didn’t clean off the vocal bits left over from the upcoming 3582 album version of the track.

“The Art of War” is purely instrumental, mixing a pulsating drum with a slightly annoying loop that despite some interesting manipulation starts to get on your nerve after a while. “Bobby Seale Bound and Gagged” has the Black Panther leader speaking out from behind bars after having been sentenced for contempt of court in 1969. The title refers to the infamous scenes when Seale was bound and gagged in court because he wouldn’t stop insulting the judge. After Seale, Rawls brings in a news reporter summing up the trial while waiting for the verdict. The music begings to fade as the reporter describes the court room, his voice being slowed down to a halt by Rawls just as he says “…above them the great seal of the United States.” It would certainly make for an intriguing track, if Rawls hadn’t inexplicably edited out the reporter’s comments about the very incident the song is about, and if the beat was any less bland.

The second key track with historical soundbites is “America, Fulfill Your Promise”, with an excerpt from John F. Kennedy’s important speech at the height of the controversy surronding the first black students at the University of Alabama in 1963. This is, in part, what J. Rawls chose to quote: “The heart of the question is whether all Americans are to be afforded equal rights and equal opportunities, whether we are going to treat our fellow Americans as we want to be treated. If an American, because his skin is dark, cannot eat lunch in a restaurant open to the public, if he cannot send his children to the best public school available, if he cannot vote for the public officials who represent him, if, in short, he cannot enjoy the full and free life which all of us want, then who among us would be content to have the color of his skin changed and stand in his place? Who among us would then be content with the counsels of patience and delay? One hundred years of delay have passed since President Lincoln freed the slaves, yet their heirs, their grandsons, are not fully free. They are not yet freed from the bonds of injustice. They are not yet freed from social and economic oppression, and this nation, for all its hopes and all its boasts, will not be fully free until all its citizens are free.”

On another track, “Sixty-Three Is the Jubilee”, Rawls takes us back these exact same hundred years, the title referring to an old song celebrating the emancipation of the slaves. Here, the mood of the track fits the topic, with a rejoicing piano and hand claps coming together to create a playful tune a la Yesterdays New Quintet. “February 14. 1929” (the day of Al Capone’s St. Valentine’s Day Massacre) is a lush affair comprised of knocking drums, swishing hi-hats, laconic guitars and dim keyboard textures.

Given the political touch of this album, it may seem odd that J. Rawls didn’t choose to make his beats more expressive. Most top producers would have opted for a more radical approach, trying harder to match the song’s topic and its musical theme. But then again, no top producer ever thought of doing something like this. To understand “Histories Greatest Battles, Campaigns and Topics”, it might help to know that J. Rawls is a teacher in real life. That’s not to say that this album is a history lesson for kids, but his care for both political history and children definitely helped shape this project. But if it wasn’t for “Bobby Seale Bound and Gagged” and “America, Fulfill Your Promise” (the two tracks with extensive historical footage) demanding your attention, this album would amount to nothing more than a harmless easy listening experience.

On two occasions Rawls leaves his cosy hip-hop hideout where Latin American jazz meets heavy helpings of bass and simplistic drum programming. “Welcome to North Africa” is a sparse but vibing mix of percussion and chanting, while “The Polar Palms of Moscow” brings together, of all things, hand claps and cinematic strings to create a (more or less) suspenseful track. But then, “Histories Greatest Battles, Campaigns and Topics” flows undeniably well, held together by musical interludes and blends. The downside of this mellow mix is an unfulfilled concept that is additionally impaired by two tracks with guest vocals (“Hard Rock” w/ rapper BJ Digby and “Future” with singer Tavaris) that have nothing to do with it. In the end, what we have here is a great idea that somehow failed to materialize properly.