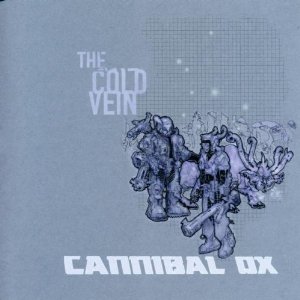 Cannibal Ox’s time has come. A little earlier, they would have been out-weirded by the above-ground hype surrounding the Anticon crew. A few years earlier, they might have been labled as more abstract Company Flow biters. Several years ago, they just would have been too weird. But right now, abstract hip-hop hasn’t had a notable album in a minute, previously adored underground emcees are going stale and the midwest hasn’t established enough of a sound to flood the mainstream yet with clones. Given this brief, theoretical market-cornering, Can Ox could easily use their ample mic skills to prove that NYC underground still has some raw, weird creative talent. If you’ve copped the singles, you know what to expect; Vordul’s syllable-twisting complexes and Vast’s simple flow of complicated lyrics over El-P production like a broken synth through blown speakers. The formula usually works pretty well, from the mostly-battle tracks like “Raspberry Fields” and “Straight Off the D.I.C.” to concept jams like “The F-Word.”

Straight up, lyrically, “The Cold Vein” is uneven. Vordul is good, but Vast Aire carries most of the songs with his voice alone. And his lyrics don’t hurt – peep a few lines from his first verse on “Stress Rap”:

“Elohim, with the rhyme scheme
and when the lyrics leave the mouth, they look like light beams
with wings attached to the mic I say fly rhymes
read between the lines (here Vast lies)
the beat be trying to sex me and marry me (what)
I’m talkin white picket fence and a family”

As nice as that gets, Vordul doesn’t always pull his weight here. Since Vast has the dominating aural presence, Vordul sometimes struggles to keep up and gets buried in the mix under the layered beats. Vordul also has a tendancy to spiral out into space with his lyrics. For the most part, Vast always comes back with some relatively straight-ahead shit to keep everything grounded, like GZA or Meth in the Wu. Still, that is one of the album’s weak points – Vast does struggle sometimes to keep everything logical. When El-P shows up on “Ridiculoid,” insanity reigns and I gotta fight to keep listening. When Vast goes out there with the lyrics, things also get bad. More obscure tracks like “Pigeon” and “Straight Off the D.I.C.” got Vast talking about “we use bear traps to catch weasels” and me getting bored. They aren’t bad tracks, but they take too much effort to just enjoy; they’re too dense. But Can Ox is lyrically on-point plenty of the time. Of the 15 tracks on the album, 5 of them are well-done, reasonably straight-ahead concept jams, the real gems. My two picks are “The F-Word,” Vast contemplating unrequited love (“Cupid had me running circles blindfolded in the daytime with a flashlight lookin for her”), and “Painkillers,” a bittersweet drug anthem with dope lines from Vordul. The hidden track, which I’m assuming is called “Phoenix,” sounds like a modern-day 60’s protest song. The track with guest verses by more straight ahead emcees help Vordul blend in nicely; “Battle for Asgard” with Stronghold crew members L.I.F.E.long and C-Rayz Walz is the token posse cut, and it is ill.

While the lyrics are inconsistent, El-P’s production is, if nothing else, very steady. The tracks here are all down-tempo blends of dirty drums and breaks with samples that are either noise made pleasant or good samples made noise. I can’t front, I really dig El-P’s style; for everything nasty, there is something easier to listen to to balance it out. “Ridiculoid” stands out like that, with El-P flipping some weird buzzing noise that makes you want to punch something from the top, then switching up to some much nicer chords. The beats aren’t bangers the whole way through; “Ox Out the Cage” almost hurts and I’m not really feeling the video game flavor of “Real Earth.” But “Iron Galaxy,” the fucked up drums on “Vein,” the 80’s metal-synth of “The F-Word” and the almost normal-sounding “Painkillers” all slam pretty hard. Regardless, it will probably be the beats that drive lots of listeners away. Aside from their artistic value, I can easily see how some of even his better beats could be really hard to listen to. Even so, I don’t know if I’d have wanted to hear any other producers on “The Cold Vein.” The emcees’ styles are really unconventional, slow and abstract, and probably would sound very out of place over Primo, Celph Titled or Pete Rock.

Overall, “The Cold Vein” is a decent album somewhere between stranger hip-hop and more traditional battle rap. As uneven as it is, “Iron Galaxy” should be a classic under any circumstances. Def Jux has good things in store, and this is a good place for the next big underground juggernaut to build from.