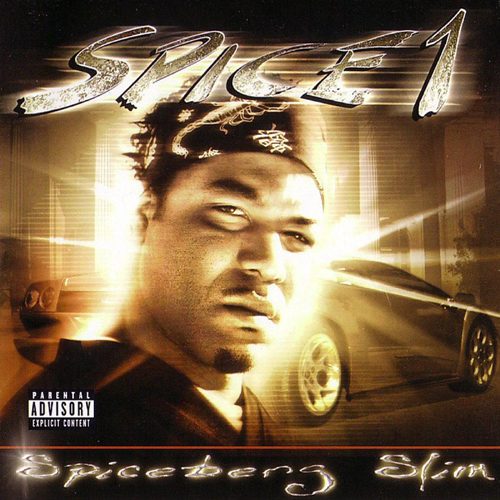 Unlike countless other rappers who have faded into obscurity, Spice 1 is still at it, releasing records and whatever goes along with it. You have to admire such persistence, because it eventually translates into something not many rappers can claim: longevity. Just peep the insides of the booklet of his new album, and you’ll see a face that bears the traces of years of experience. If there’s one rapper who can claim the ‘O.G.’ tag for himself, it’s Spice 1, because he helped make the rap game what it is today. On the low, that is. We’re not talking high profile star status, movie roles, court cases, flashy jewelry and all that. While Spice 1 might have experienced his fair share of the highs and lows of being a rap star, the legacy he will leave behind will be the influence he’s had on other rappers: to excel at rapping and to subsequently make it in this rap game even if you grew up far away from New York. To this day Spice 1 is a regional success, a name business partners can bank on.

But as the genius of his early days and the relevance of his heyday have faded away, Spice 1 wasn’t quite able to escape his own formula. Or rather, he’s watered said formula down. He was always good for a way above average album (last time he did it in 1999 with “Immortalized”) but lately it seems as if he’s run out of ideas. To name his album “Spiceberg Slim” was a smart move, because it made you expect more than just a simple play on the name of one of rap’s forefathers, pimp-turned-poet Iceberg Slim.

But when the opening title track resorts to basic ‘I/U’ comparisons, it’s a far cry from Iceberg Slim’s sparse but intricate storytelling:

“You ain’t a thug, you’se a thong, you the stress, I’m the bomb
You the monkey in this muthafuckin’ game and I’m King Kong
You fake as fuck and I’m the shit, I’m a gangsta and you’se a bitch
I pack extra clips, you pack extra lipstick
I’m a killer, you’se a coward, you generic, I’m high-powered
You drop the soap on purpose in jail up in the shower
I’m a thug, you get mugged, I’m a pound, you one bud
50 caliber nigga, you just a .22 slug
I’m platinum, you hard wood, I’m Hummer, you Hyundai
I’m a soldier and you just a civilian scared to die”

If this is supposed to be some old school hommage type of thing, I’d like to point out that in his own old school daze, Spice 1 was far more advanced lyrically. Thankfully, the song is saved by a confident beat that has it all: bass bottoms, clear sound, funky guitar playing, dramatic effects. It makes you hope for at least a fruitful musical journey. Unfortunately, on the beat side, the album comes down as fast as it went up. Apart from the title track and one or two others, “Spiceberg Slim” has nothing to offer but clichÃ©d West Coast beats. The production is solely done by Spice and Wino (the same Wino that helped make Coolio an international success), with some assistance from Tone Toven. What’s sad is that Spice 1 has seen (and done) much better beats, with or without samples, with or without Ant Banks. To their credit, it has to be acknowledged that most of the beats are up-to-date. What they’re not up to par with is Spice 1’s stature as an MC.

Left without musical inspiration, the East Bay Gangster tries to rely on his trademark fast and precise delivery and his gangsta status to keep the listener interested, but to no avail. Spice 1 once had a magical touch that’s now disappeared into thin air, longtime fans will notice when they skip through this album. “Welcome Back to the Ghetto”, which is set up as “Welcome to the Ghetto” 10 years later, again falls back on Marvin Gaye’s “Inner City Blues” (this time without an actual sample used) but pales in comparison to the original from 1992. Still, the song is strong and features probably the most touching of all verses here:

“I’m worried about Mrs. Parker, that old lady, she just sit on the porch
in a rocking chair, watching niggas come up short
She had a son three months ago shot and killed
in cold blood, on his way to the sto’
Man you know, she used to wave to me, used to speak and say hi
but now all she do is stare with that look in her eye
rocking back and forth with no facial expression
I heard that she had a stroke from all the depression
Working hard all her life, scrubbing toilets and floors
and my nigga, he didn’t want his mama working no more
But the price for a better life can cost you your own
I guess that’s why my nigga never made it back home”

The last lines from “Welcome Back to the Ghetto” (“Lord please tell Lucifer he need to turn the heat down / I’m feelin’ the flames of hell underneath my feet now”) get recycled for “Turn da Heat Down” featuring the Outlawz. Safe for the ill-placed gospel bits in the chorus, this too is a decent effort on all levels.

Elsewhere, where it’s all about shutting haters up, spitting game and thug myths, “Spiceberg Slim” hardly sets itself apart from the average thug record. There’s the occasional variation in the delivery, half-sung hooks add color to some songs, but ultimately the album hangs by one a single thread, and that is Spice 1’s mostly solid, occasionally even stellar vocal performance. It’s that familiar voice they’re so accustomed to that has Spice 1 fans coming back. The tales it tells may not be as interesting as they used to, but like that voice that tucked you into your bed and turned off the light, that voice will forever be stuck in your head in a flood of voices that come and go.

Still, Spice’s further longevity is in jeopardy. Fans can be fickle, and once they find out that 4 songs from “Spiceberg Slim” already appeared on “The Playa Rich Project 2” (“Lucky I’m Rappin”, “You Got Me Fucked Up”, “Das OK”, “Turn da Heat Down”), they might think they’re getting screwed. The advice to young readers then, would be to check out classics like “Spice 1”, “187 He Wrote”, “Amerikkka’s Nightmare” or the first two of the three “Hits” compilations he has out to be properly introduced to Spiceberg Slim.