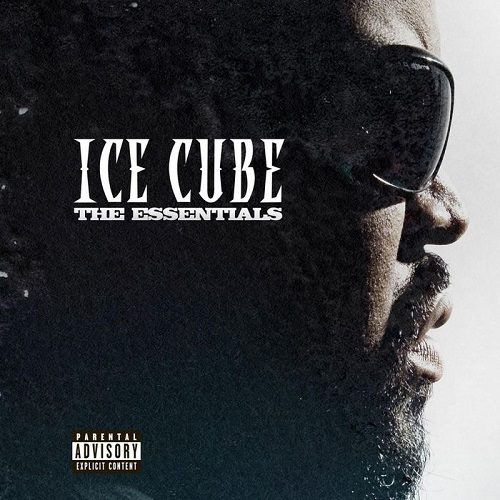 At times like these I am tempted to bite the steez of my man Laze over at ADDReviews.com. I can honestly tell you everything you need to know about Ice Cube’s “The Essentials” in 20 words or less, but being this is RapReviews.com you undoubtedly expect more from us than that. Therefore I offer the following proposal – the next three paragraphs are the RR style coverage you know and love while the closing paragraph will be written ADD style. If you’re impatient you can skip ahead to the grand motherfuckin’ finale, but if you’re curious to see how the two reviews compare read all the way through to the end.

Today’s shrinkwrap sticker promises us “The latest and greatest songs of [Ice Cube’s] career including the hits, fan favorites and rare tracks!” Let’s break down that promise in precisely the order they listed it. First up is “the hits,” which is a bit of a perplexing concept when it comes to Ice Cube’s career. There’s no question that O’Shea Jackson is a bonafide hip-hop icon with a track record nearly as long as LL Cool J or KRS-One, a 20+ year veteran who can lay claim to some of the greatest rap albums ever recorded whether as a member of N.W.A or as a soloist. Unfortunately Cube’s self-described “pyroclastic flow” has been too volatile to generate much radio play, so having “hits” off classic albums like “AmeriKKKa’s Most Wanted” and “Death Certificate” has been a difficult proposition at best. It’s not that I disagree with the inclusion of “Rollin’ With the Lench Mob” – it’s a bomb-ass song – but the very first words Cube spits are “YOU CAN’T FUCK WITH THE CRIMINAL – rappin’ over gangster shit!” I doubt very much this was a “hit” except to his hardcore hip-hop fans. If that’s the criteria for inclusion, there were much better choices from AMW not the least of which is the opening song “The Nigga Ya Love to Hate.” Is “Once Upon a Time in the Projects” included? Fuck no. How about “Who’s the Mack?” That’s the closest thing to a radio “hit” onAMW. Fuck no, that’s not included either. At least “Dead Homiez” from his “Kill at Will” EP made the cut, but in terms of classics both “The Product” and “Jackin’ for Beats” are equally relevant and sadly missing.

That brings us to the concept of “fan favorites,” something that “The Essentials” tries to half-heartedly address and repeatedly comes up short. To be fair the task was nearly impossible to accomplish on a one-disc release given the size and scope of Cube’s catalogue, but that’s no excuse for some of the all-time great performances that didn’t make the cut. A short list of fan favorites would include Cube’s scathing critique of sellouts on “True to the Game,” the unapologetically raw diss track “No Vaseline,” the hard-stomping heart-pumping anthem “Wicked,” the racist cop profile of “Who Got the Camera?” and the smooth-ass top down driver “You Know How We Do It” (the latter arguably being another of Cube’s rare mainstream “hits”). None were included. Don’t try to pass off “The Essentials” as having the fan favorites to me or to anybody else reading this review because that’s just a load of horseshit. I’m not trying to be hard on “War” or “Peace” since I probably enjoyed those Cube albums more than most, but if you’re making this album and include “Ghetto Vet” and “Supreme Hustle” over any of the songs I just listed above you need to seriously rethink your priorities (no pun intended).

Finally that brings us to the most offensive part of the shrinkwrap sticker – “rare tracks.” I’ll be damned if I can find one anywhere on “The Essentials,” because other than a useless live performance of “Why We Thugs” there’s absolutely nothing here that hasn’t been heard before. NOTHING. Even Cube’s “In the Movies” was a better attempt at compiling together rare tracks, and even that attempt was seriously misguided. Every single song on “The Essentials” comes from an Ice Cube album you can purchase at any retail store nationwide. Essentially these songs are plucked directly from his well-known catalogue. If you want something actually “rare” this is a total fucking waste of your time. Try Cube’s 1994 album “Bootlegs & B-Sides” instead, a song which includes some “classic fan favorites” in its own right like “24 Wit an L” and “My Skin Is a Sin.” To put it bluntly this album fails to live up to every single promise made on the shrinkwrap, and then rubs your nose in it by including “Cold Places” from the just released “Raw Footage” to boot. A good song to be sure, but it’s mind-boggling that “The Essentials” would waste perfectly good space where a Cube classic could go for a song put out a month ago. That brings us to the conclusion of this review – a summary of “The Essentials” in 20 words or less in tribute to my man Laze from ADDReviews.com: