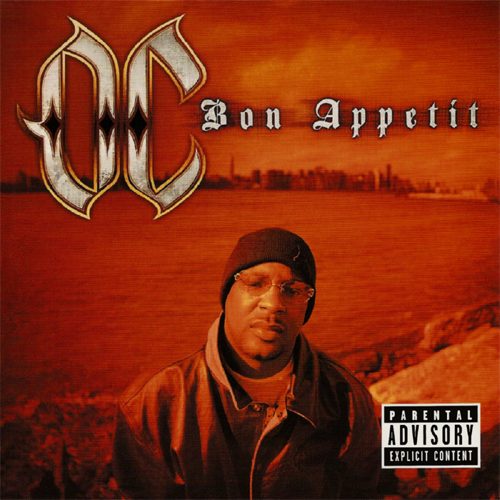 So O.C. wishes us ‘bon appetit’ and his offering gets panned right away. Most of these now unsatisfied customers remember having been served the “minerals and vitamins / irons and the niacins” that other rappers often fail to deliver back in 1994 by a young hopeful out of Bushwick, Brooklyn, NY. O.C.’s debut single “Time’s Up” was a wake-up call to a more and more lyrically stagnant rap scene. Since then a lot has happened. Rappers came. Rappers went. O.C. is still here. He remains a fixture in New York rap, albeit a small one. He’s +been+ doing his thing. For example he has put it down the hardest on last year’s D.I.T.C. album, in my opinion. He carries a heavy load with him, though. It’s those people that got first addicted to O.C. that are still riding his back and can’t seem to let go. They might be one of the reasons that O.C. is still around, but their constant nagging also prevents him from freeing himself from lofty expectations. They say what they’ve already said last time, when his sophomore effort hit the shelves. That O.C.’s too eagerly reaching for commercial success. Let the man eat, for God’s sake.

That it’s a new day for him is evidenced by various things: O.C. is promoting his new crew (Wildlife), he’s on a new label (JCOR), he lets money talk and bullshit walk while longtime associate Buckwild flips the contemporary sound around, creating a smoothed out surface for his man to flow over. “Back to Cali” evokes the late Big L’s (too) late breakthrough single “Holdin’ It Down”. There’s a guest rapper, but no singer (and there won’t be any throughout the album) and the mood is as comforting as it is cocky. Certain phrases seem to catch people on the wrong (and god forbid the dancing) foot, but if you allow yourself to be taken into comfort by “Back To Cali”, you will “holla” and “bounce” as O.C. demands you to. It’s a sensation often felt on “Bon Appetit”: light-heartedness. “Let it flow, let yourself go,” was once said by the Beastie Boys, and there’s a whole lot of truth to that. This is not a album to be analyzed, it’s one to enjoy. I will admit that O.C. has dumbed his lyrics considerably down. You can speculate about his motives, but maybe he just wasn’t in the mood to get too much into detail. In fact the whole album could easily have been freestyled, with O.C. repeating routines he has been practising on the low. He lets Buck’s beats take the lead and tries on different flows, pauses, chants and repeatedly refers to his nickname Mush. It’s as if he’s not really rapping but just laying down phrases. He’s leaning back instead of leaning over backwards, thus not only making himself feel comfortable, but also the listener.

It’s like he said in “Time’s Up”: “The more emotion I put into it, the harder I rock.” Since this time O.C.’s not putting that much emotion in it, he doesn’t rock as hard. But he still rocks. There are some tense moments, like in “Respect tha Drop”, which showcases his incredible storytelling abilities, or in “Doin’ Dirt”, another cautionary tale told in chilling detail. Or in the (official) closing “Psalm 23”, penned in rememberance of Big L. Or the 2 hidden (at least on my release) jewels, “Half Good, Half Sinner” and “Bonafied” (w/ Jay-Z in the chorus). There’s also some wilding out with the Ghetto Dwellaz (“Get It Dirty” with Party Arty and D Flow and “Weed & Drinks” with A.G.), but the rest of the cuts has O.C. contemplating where he is right now and where he needs to go: “Soul To Keep”, “Dr. Know”, “Bounce Mission”, “Bon Appetit”, “Utmost” and “Paradise” – answering more than just the question “to floss or not to floss” (“Dr. Know”). Some of you might not like the answers; so go looking for answers that suit you elsewhere. At least that’s what I will do.

Overly critical hip-hop listeners often regard albums as wasted opportunities. We expect a masterpiece just because someone has had a few nice singles or made some decent guest appearances. True, many fail to live up to their potential, due to industry pitfalls or by their own fault, but a rap album is what you make it. You buy the damn thing, don’t waste your time complaining about it. So if you’re unhappy with “Bon Appetit”, at least rejoice with O.C. who apparently feels he’s on the right track: “Whatever I write, I abide by / sayin’ what I mean, meanin’ what I stand by / O.C. be full of ambition / never givin’ up on the good things, I love my life, it’s worth livin'” (“Paradise”).