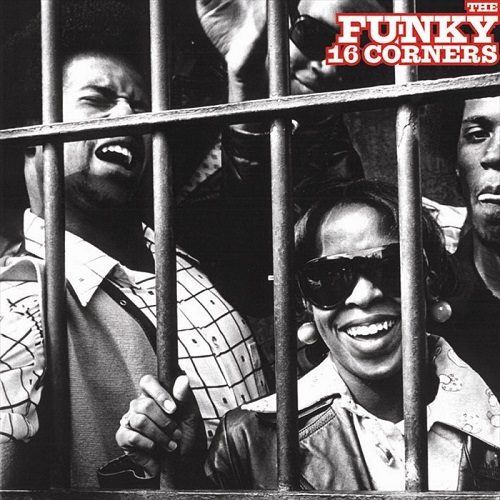 As someone who has enjoyed funk and soul music since kindergarten, I have found my tastes grow from Parliament/Funkadelic to the gritty grooves of Eddie Bo and countless other treasures from Louisiana, and other funk hot spots. There are many treasures in the funk world, ask the thousands of funk collectors who dig through cockroach ridden warehouses and old noodle factories just to be able to hear a sweaty 10 second breakbeat. Or talk to the thousands of producers and fans who go out of their way to find compilation CD’s of unknown Italian origin.

For years, it had been the Europeans and Japanese who have taken our music, archived and preserved it, and given back to us at ten times the price. The awareness of this kind of music, and its collectibility, has grown quite a bit in the last ten years, especially with the help of the internet, and “The Funky 16 Corners” is a culmination of where we’ve been, and where we plan to go.

“The Funky 16 Corners” gathers 16 rare and almost-impossible-to-find funk and hard soul tracks, many of which have been sampled in hip-hop over the years. Fans of Handsome Boy Modeling School will recognize “The Dump” by Soul Vibrations. The Kashmere Stage Band are known by crate diggers as the high school band from Texas who were definitely “on the one”, and their “Kashmere” shows why their albums are highly sought after. Spider Harrison’s “Beautiful Day” is a mellow tune with a tight intro not unlike some of Funkadelic’s best sides. Billy Wooten’s “In The Rain” has been put to good use many times over the years, and is argubly the most sampled of the bunch.

Other songs are just tight tracks to groove to, such as Slim & The Soulful Saints’ “Fish Head” and Carleen & The Groovers’ “Can We Rap”. The centerpiece is a track Stones Throw released as a 45, The Highlighters’ “The Funky 16 Corners”. Way back when your mom (or maybe your grandmother) had a new dance each week to dance to, a little band from Indiana decided to go into the studio and release a follow-up to their first record. They were a six piece band who showed their love for James Brown by representing Indianapolis in the only way they knew how. Every one in the band got theirs, but once the drummer got the spotlight, it becomes a moment every vinyl junkie lives for, the unapologetic breakbeat (in this case, a mighty 17 second break where it sounds as if the studio couldn’t hold in the excitement and energy). No need to flip the 45 this time around, the song combines both parts for the first time. The compact disc also features the megamix Cut Chemist made combining most of the songs on the album, entitled “Bunky’s Pick”, which Stones Throw released as a 12″ single this past summer.

Eothen “Egon” Alapatt deserves much credit for the release of this, and I’m sure he would be humble enough to say “Nah, it wasn’t only me.” But through his love of music, his passion to archive and preserve these old records, and his neverending curiosity, he has been able to share this with everyone. As the old saying goes, “funk is its own reward”. True indeed. (BTW – I’m still looking for the Versatile Gents 45.)