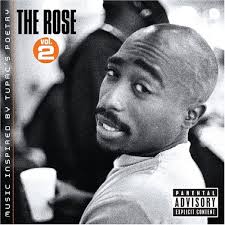 Now I must say, I don’t know about this “2Pac” character. Not only does he keep recycling verses and remixing his own material with weak beats, but he has the nerve to put his own name and face on more products than Paul Newman. Just who does he think he is? I’ve been getting damn tired of him lately, and now I hear that he is letting other people turn his poetry into music? Does he have no shame?!

Wait a minute – you mean to tell me that he’s been dead for nine years, and that the constant recycling of his music is not his fault? You mean to tell me that anyone and everyone is willing to attach their names to his name in order to claim a part of his legend? He was and is a brilliant artist whose time came too soon? So what are these people doing, anyway? Is the soiling of such a figure’s material so insignificant that every year or so we are treated to something “brand new” from an artist that stopped recording music nine years ago?

2Pac is dead and gone, and there are two existing types of fans now. The first, my personal favorite, is the fan who thinks wistfully back to the days when he was more than just a memory, and listens to his music and watches his movies as a testament to his greatness. The second one I am not so fond of. The second one I have a bit less respect for. The second one continues to get duped into thinking that 2Pac’s voice is still breathing through the “Nu-Mixx Classics” that come out, and that “music inspired by Tupac’s poetry” actually means something. The only songs on this release that actually resemble spoken word poetry are tolerable because they feature someone (Ludacris?!) interpreting Pac’s poetry directly. There two other types of songs here. The rap music is executed rather nicely by Bone Thugs and Talib Kweli on separate tracks, but the vast majority is without merit. Ice Cube’s protÃ©gÃ© YoYo pops up to record an insufferable track, but the worst of the bunch is “Life Through My Eyes,” despite a mediocre-to-good beat. This cut is credited to Memphis Bleek and 2Pac, which apparently means that 2Pac’s voice is looped for the chorus while Bleek gets to deliver three of his original verses. I’m sorry, but when I throw 2Pac on, it’s not so that I can get an exclusive new track from perennial underachiever Memphis Bleek. Pac’s words on the hook inject some energy to the track, but the concept is ruined before it has begun.

The second type of music that is inspired into creation here is R&B. Lyfe Jennings gives us “Movin’ On” and Celina interprets 2Pac’s “Eternal Lament,” and these efforts succeed more than the others, but only because R&B is a more fitting format for poetry. Both are decent, at least, but neither is something I particularly want to associate with 2Pac’s legacy in my own mind. Also, neither should give someone any reason to actually purchase “The Rose Vol. 2.”

Dead Prez, an apt choice for this disc, disappoints greatly on “If I Fall.” The beat is a wreck, and because of this, M-1 and stic.man cannot shake the awkward rhythm to create their own flows. The only other notable track is the obligatory appearance from the Outlawz, which is essentially just an Outlawz group cut. That said, at least they are not trying to be artsy, instead delivering a rough song helped along by a self-produced array of pianos. Surprising, isn’t it, that on a record with Ludacris, Bone Thugs, and Kweli, some of the most spirited music comes from these Outlawz.

2Pac just does not deserve this treatment. Some may think of this album as an ode to 2Pac, which it technically is, but they must realize that someone is making a buck off of it, and the final product is too poor to merit release. There are no laughably bad moments, but none of these interpretations are all that special. 2Pac was not the greatest poet around, but his legacy demands something better. I mean, for heaven’s sake, they are even recycling his poetry. “When Ure Heart Turns Cold,” the Outlawz contribution, appeared in a different form on the first 2Pac poetry album! We have enough imitation 2Pac music by now, I vote that all this nonsense just stop. Pick up his poetry instead, or at least throw on “Me Against The World,” and I promise you’ll be better for it.