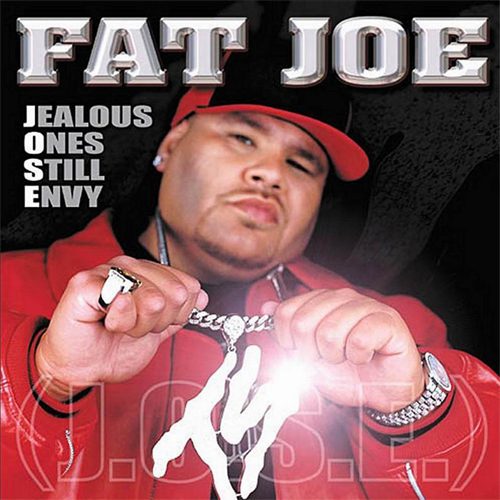 A lot of shit has gone down since the release of Fat Joe’s last album. The staple and in all honesty the only top notch MC on Joe’s Terror Squad label (Big Pun of course) passed away. Two competent if unspectacular members (Cuban Link and Triple Seis) of the label for various reasons that are still somewhat shrouded in mystery. With Squad collapsing and everyone leaving them for dead, it was essential that Fat Joe take Pun’s place as the label’s flag bearer and prove that the TS is still important. So what would he do?

Follow the same formula the Terror Squad was founded on: bangin beats and hard edged lyrics. Joe has always had a reputation for getting the hottest producers in the game on his album and no, I ain’t talking about the Neptunes and Timbaland, I’m talking about hardcore NY producers like Irv Gotti, Psycho Les, Diamond D, Showbiz, DJ Premier, Ski, and Buckwild. While the DITC influence is unfortunatey much less than usual (Buckwild is the only DITC producer to be found, and there are no DITC guest spots), the replacement parts get the job done well; with a production team comprised of the aforementioned Buckwild as well as heavyweights like the Alchemist, Bink Dog, and Rocwilder, amongst several lesser known but dope nonetheless producers, the one thing that this album does not lack is beats. Expecting a lyrical masterpiece and diverse subject matter from Fat Joe is like expecting the same thing from MOP: it ain’t happening. Joe is not going to flip a million syllables a minute and perform lyrical acrobatics like the departed Pun, but he comes with solid rhyme schemes and a very strong, poignant delivery, speaking about gangsta shit and street related activities.

From the get go, it’s clear that Joe was not planning on taking any prisoners on this album; the hard hitting King Of New York featuring Buju Banton makes this abundantly clear. The dangerous sounding beat is coupled with hard rhymes:

“You niggas gotta face the facts: I pop shit because they can’t stop me
More cause they can’t rob me
I blam clips at your fam’s lobby
Joe the Don, and you been warned
But niggas never wanna listen till their kin’s gone
Now you wanna get it on cause your dollars stacked?
Now how you plan to hollar back with a hollow back?”

Buju Banton’s chorus adds to the hardcore vibe of the track, and it’s a winner all the way around. Another perfect example of what Fat Joe is all about is “Definition of A Don”, featuring Remy Martin. Once again the beat is a great, hardcore NY heater and Fat Joe rips it hard once again, boasting “I had it locked before I had a Glock to even put my hand on”. Remy Martin’s hook could’ve been done without, but it’s alright, the song’s still sick.

The ridiculous “My Lifestyle” has been circulating since late summer but is still just as hot, it seems. The cinematic production and on point if unimiginative lyrics with Fat Joe boasting about how gangsta and hard he is… but please, that’s what Fat Joe’s all about, if you don’t like it then you probably wouldn’t be checking for Joe in the first place. Songs like the riotous “Fight Club” featuring M.O.P. and Petey Pablo, the elongated subliminal diss to Jay-Z “He’s Not Real”, the Latin influenced “It’s OK”, and the heartfelt “Still Real” are all quality joints, with Joe spitting strongly over great beats.

Ah, but I forgot to mention… not only is Joe out to prove that he’s one of the hardest and realest MCs in the game, he’s also out to obtain the mainstream success that has somewhat evaded him up to this point. He received a gold plaque for his last effort Don Cartagena, but this time it’s obvious he’s bent on going platinum. Enter songs like huge hit “We Thuggin” featuring R. Kelly (and the remix that features Remy Martin, Noreaga, and Busta Rhymes) which everyone’s heard already, a track featuring Ja Rule and Ashanti called “What’s Love” could’ve definitely been left off as far as I’m concerned but it will certainly do it’s job in getting Joey Crack his platinum status. “Get The Hell On With That” featuring Armageddon and Ludacris is by far the best of these efforts, featuring a hot beat, a catchy chorus, and a nice verse from Luda. These tracks, in all honesty, don’t really detract from the album because they flow with it well and none of them are outright weak.

Even though it starts off strong, Joe seemed to save the best for last on this album; the absolute burner entitled “Murder Rap” which features Armageddon has possibly the best beat of any song I’ve heard all year. This is HOT SHIT, that’s really the best description I can think of. Fat Joe comes harder than he does on any song on the entire album, and Armageddon comes correct as well. Directly following is the heater entitled “The Wildlife” featuring Prospect and Xzibit. Once again, a filthy beat (see a trend here?), Joe rips the track, and X to the Z delivers a typically ill verse, sounding impeccable over the production. This and “Murder Rap” practically make the album worth copping just by themselves.

Bottom line: this is hardcore, hardrock, thugged out NY hip hop right here. Don’t let Ja Rule, Ludacris, Petey Pablo’s presence lead you to believe that this album is a blatant mainstream crossover attempt or a sellout move on Joe’s part. There are three commercial tracks on the whole album. The rest is nothing but straight heat, ridiculous beats combined with solid lyrics and firy delivery. The one thing that pisses me off about this album is that it makes me miss Big Pun even more: listen to this album, hear tracks like “Murder Rap”, “He’s Real”, and “It’s OK”, and you’ll find your jaw dropping imagining how fuckin ill Pun would’ve been over those cuts. But that’s the past. Pun’s legacy will never die, he’ll never be forgotten. But I think Joe proved that he (with the help of some of his friends) can carry the label on his back, and as long as Joe continues to select the dopest beats in the industry for him and his crew’s shit, they should be fine.