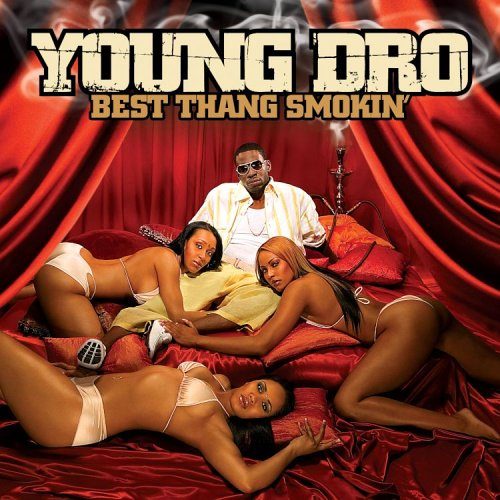 “Triple black Phantom nigga nah it ain’t Tip
with Lucky Charms diamonds man but nah it ain’t Flip
Can’t bounce, okay then I let my shoulder lean
And I bet my car talk, and I bet my motor clean
Suicide doors, brown Rover look like pork n beans
Everybody know me in the club cause they smokin me… Dro”

Whether or not EVERYBODY knows Young Dro may be up for debate, but the protege of T.I. born D’Juan Hart has certainly had a successful year thus far. It’s not every rap artist who comes out that can sell half a million RINGTONES of his first single, let alone the song itself. In fact let’s give credit where it’s due for an incredibly successful marketing campaign by Grand Hustle and Atlantic. The music video for “Shoulder Lean” illustrates how you can do his signature dance, and anybody doing his dance in the club is advertising for the album. Wait – you don’t think dance moves don’t sell records? Ten million copies of “Please Hammer Don’t Hurt ‘Em” say otherwise.

Dro is no pop rap sensation who needs a gangsta makeover though, he’s a Bankhead native that has been recording and releasing records dating back to when T.I. dropped his debut album “I’m Serious” back in 2001. The friendship between the two dates back even further, so it was probably inevitable Dro would end up on his Grand Hustle imprint sooner or later. There are times when nepotism seems like the only reason half of the artists in the music industry got where they are, but it doesn’t have to be an inherently evil practice. When nepotism results in a talented artist getting a break they otherwise wouldn’t everybody wins; it’s only when the artist sucks shit and then uses their position to get their friends who suck MORE signed that we all lose.

Given T.I. is one of the hottest rappers in the South and he has his own label’s reputation to protect, it stands to reason he wouldn’t sign a rapper who sucked even IF he was a close personal friend. It’s not quite clear why Young Dro is the “Best Thang Smokin'” though. He’s got breath control although at times he just seems to be using it to copy his friend T.I.’s flow. The vocal tone is deep but not necessarily distinctive, which is not helped by the fact his raps sound like they are being read off a teleprompter, often having no intonation or emotion. The diction leaves a little something to be desired too, as words come out mushy and often slurred together. Perhaps Dro could salvage all of this with great lyrics and great punchlines? Nope. See “Rubberband Banks”:

“Outer space ballin, put you up on astronomy
Mathematically with a pistol, I do trigger-nometry
Humbly, eat up a nigga like a piranha B
Ridin in the Cut’ the same color as a bumblebee”

Normally criticizing a rapper’s punchlines one would note that they are either far too commonly used or lazy in execution, but in Young Dro’s case it’s almost like he’s trying too hard. “Shorty say she want Dro, I think she want an ounce of me.” C’mon, that’s not even funny. Next he’s going to tell us he’s the “Best Thang Smokin'” cause a freak went down on him and got high while slobbing on his knob. Ha, ha, ha. The saving grace of this album for better or worse is the beats and guests on it. Keith Mack comes smooth with keys and drums on “We Lied.” Chad West goes “Hollywood” with Rick James samples on “Hear Me Cry.” Lil C knows how to get crunk on some “Gangsta” shit besides the previously mentioned “Shoulder Lean” single. Jazze Pha gets a piece of the action too on several nice cuts, including “Fresh” and “What it Is” as well as a song John Cena wishes he recorded called “U Don’t See Me.” Unfortunately it’s this song that illustrates Dro’s problems best by pairing him with Slim Thug. Dro tries extra hard to come across as interesting and overdoes it with raps like “Papi say he ran out of white, man get the opium/ Niggaz drop sodium, I stand like a podium/Smooth like linoleum, Preisdently I roll in ’em.” Meanwhile the laid back and charismatic Slim steals the show:

I can see where Young Dro is coming from to a degree. There’s got to be an enormous amount of pressure when you’re following in T.I.’s footsteps, especially when he’s endorsing you as being the next big thing. There’s potential for Young Dro if he learns to relax a little bit and let it come naturally, provided he works on adding more pitch variance within his delivery and comes across slightly less mush-mouthed on the M-I-C. To say Young Dro is the “Best Thang Smokin'” is a gross exaggeration, but to call him the “Worst Thang Ya Heard” would be equally excessive. When Dro strikes the right balance and steps out from T.I.’s shadow he may become more than a one hit wonder and a popular ringtone.