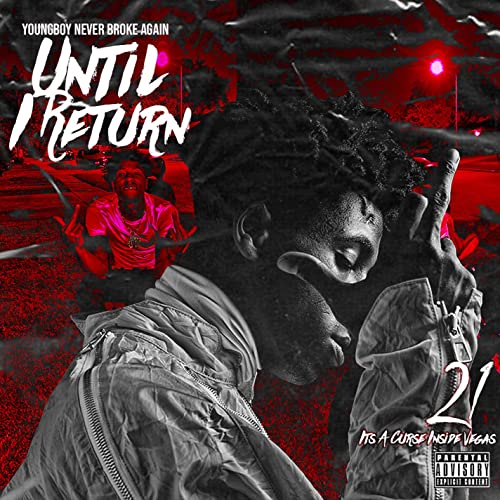 If you know YoungBoy Never Broke Again a/k/a NBA YoungBoy you know he loves his slimes and hates his haters. “Hey bitch I’m rich, plus I’m super lit.” That’s as thoughtful or profound as songs like “Around” tend to get. “I should change my name to double R because I’m Really Rich.” That’s it.

There’s an audience for that rap and YoungBoy is feeding it on “Until I Return.” Actually he’s constantly serving the hungry because he tends to drop multiple projects a year. The best thing about him is the Baton Rouge accent, which makes him sound like a modern day Cash Money rapper… except when he’s AutoTuned and crooning of course. That’s the least best thing about YoungBoy. He can clearly flow on tempo and has breath control so he doesn’t need to modulate his vocals. It only makes him sound like every other rapper on songs like “Thrasher,” taking away those distinctive characteristics that would help him stand out in a crowded field.

“I’m sick of all this motherfucking poverty.” Bro, who isn’t? By the look of your videos though you’re doing pretty well (unless that’s all for show). In fact on the song “Funds” he’s clearly not sick of it any more. The slower strummed track and HEAVY amount of modulation makes it sound like he’s doing a duet with Post Malone… but it’s all YoungBoy start to finish.

Production is what carries YoungBoy across the finish line. Even when the lyrical content is average and the sound lacks distinctiveness, the hard bass and pianos of a song like “Mask On” (not to be confused with Future’s “Mask Off”) make it easy to listen to. The downside of that is that pretty much any artist could be inserted over a beat that fresh and succeed. You don’t want to be the rapper people say is made by his beats instead of the rapper who everybody wants ON their beats.

I don’t really mind “Until I Return” that much. Despite the banality of his subjects and crass misogyny that comes through in his bars, he’s not any worse than any similarly situated rapper who currently has a large following. I’d even say he’s “better than average” but it’s not the highest form of praise, and I can’t really go much higher than that. Like Erik Satie this is “furniture music” meant to fill a room but not really distract you all that much. It’s good in the background when you’re not paying attention.