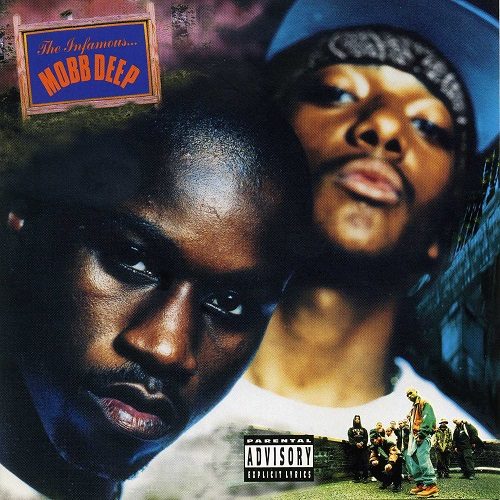 Although they already had one album notched on their belt by 1995 (the mostly forgettable “Juvenile Hell”) this is the album where it all really started. For a whole generation of hip-hop heads, this was the album that made Mobb-phonics and MD beats a way of life. You ain’t know? Let me tell you about it Dunn.

For a start, the lead single “Shook Ones Pt. II” took the hard in hardcore to a whole new level. Forget for the moment that there’s no “Part I” on this or any other album (it does exist, but only as a single b-side) – it’s not relevant. Concentrate instead on the music to this song. If you don’t have a copy of the album or the single, borrow one from somebody right NOW. Cue up track 15, or if you have a tape rewind from the end of side two to the beginning of the song, and push play. Turn off all the lights and listen. First you hear the hi-hat and the snare, then you hear the eerie wailing, and as the words “to all the killers and the hundred dollar billers” comes in, you get your first taste of the bass. When you hear “check it out now” the final layer of melody echoes 1-2, 1-2 1-2-3-4 from the lowest registers of the piano. Of all the instances of sonic perfection in hip-hop music, this one ranks right up there for me with “Concerto of the Desperado” by The Roots and “Come Clean” by Jeru the Damaja. Of course, these songs all had to have brilliant lyrics to make them classics, and the darkly brutal execution of rappers Havoc and Prodigy herein is no exception:

“Your simple words just don’t move me; you’re minor, we’re major
You’re all up in the game and don’t deserve to be a player
Don’t make me have to call your name out
Your crew is featherweight – my gunshots’ll make you levitate
I’m only nineteen but my mind is old
and when the things get for real my warm heart turns cold
Another nigga deceased, another story gets told
It ain’t nuttin really; aiyyo Dunn spark the Phillie
so I can get my mind off these yellowback niggaz
Why they still alive I don’t know, go figure
Meanwhile back in Queens the realness and foundation
If I die, I couldn’t choose a better location
When the slugs penetrate, you feel a burning sensation
Gettin closer to God, in a tight situation now
take these words home and think it through
Or the next rhyme I write might be about you”

Even today, hearing this verse still makes the small hairs on the back of my neck stand straight on end. If Prodigy pens a verse like this in response to Jay-Z, he may sorely regret saying “You little fuck, I got money stacks bigger than you” on “Takeover.” But as brilliant as this one song is, there is so much more than that on “The Infamous.” Complete albums from beginning to end were as much a rarity then as they are now, but Mobb Deep did not waste a cut. The very first track “The Start of Your Ending (41st Side)” is both an introduction to where they are from and a musical preperation for the dopeness to come – no lame-ass “Intro” skit or song necessary. Following a short interlude Mobb Deep comes back with a cut whose dark piano riffs echo those of “Shook Ones” and even reference it by name – “Survival of the Fittest.” Anybody already hyped by the sonic quality of the album thus far was little prepared for one of the illest posse songs of all time: “Eye For a Eye (Your Beef is Mines)” featuring GREAT verses from Raekwon the Chef and the man we once used to call Nasty Nas:

“Condominium, thug dressed like a gentleman
Tailor made ostrich, Chanel for my women friend
Murderin, numbers on your head while I’m burglarin
Shank is servin em, whassup to all my niggaz swervin in
New York metropolis, the Bridge brings apocalypse
Shoot at the clouds feels like, the holy beast is watchin us
Mad man my sanity is goin like an hourglass
Gun inside my bad hand I sliced tryin to bag grams”

I wish there was a song that I could hold up as an example of either Mobb Deep or guest producer Abstract, but there is none. Take the latter’s “Give Up the Goods (Just Step)” – a beat whose popularity has caused a slew of rappers to freestyle over it from Funkmaster Flex to DJ Clue. Yet and still, their fellow Queensbridge rapper Big Noyd outshines them all simply by being there first to bust lyrical caps with Mobb Deep, and one simple statement from the song echoes eternally: “Yo ain’t no time for fakin jacks, cause brothers that fake jacks get laid on they back.” Who would fuck with Mobb Deep? These relatively young rappers had a sound and machismo that made them sound like war weary rap veterans twice their age – unafraid to get ahead to leave behind their Queensbridge projects but simultaneously proud of where they grew up and who they are.

Song after song shines – the smoothly flowing “Temperature’s Rising” whose sung hook seems entirely appropriate, the prison narrative “Up North Trip”, the cautious survivalist tale “Trife Life” about a setup by an ex-girlfriend, the ominously brutal “Q.U. – Hectic” and the warfare anthem of gunfire “Right Back at You” featuring Wu members Ghostface and Raekwon as well as Big Noyd. Trying to find flaws in the production or the lyrics is like completing a 10 billion piece jigsaw puzzle – you might succeed but only after years and YEARS of effort. The album closes out with the pounding bassline of the morbidly surreal “Cradle to the Grave” and the curiously upbeat sounding horns of “Drink Away the Pain” with a guest verse by Q-Tip of A Tribe Called Quest.

Of course the term “closing” is subjective, since the album actually ends with the songs “Shook Ones Pt. II” and “Party’s Over,” but if you took my advice you started at “Shook Ones” and worked your way back around to it. The song is so dark and powerful there could be no better introduction to Mobb Deep than this one song. It encapsulates the reason their fandom has survived over the years, and the unfortunately high expectations of Havoc and Prodigy that in some cases they have failed to live up to. Still on an album that for 99% of the rap public was their first TRUE introduction to Mobb Deep, it was the album that took Queensbridge from it’s status of residence for MC Shan and Nas to almost mythical proportions. Mobb Deep takes you on a journey through the gritty reality of the 41st Side, and it’s a trip you could never possibly forget.