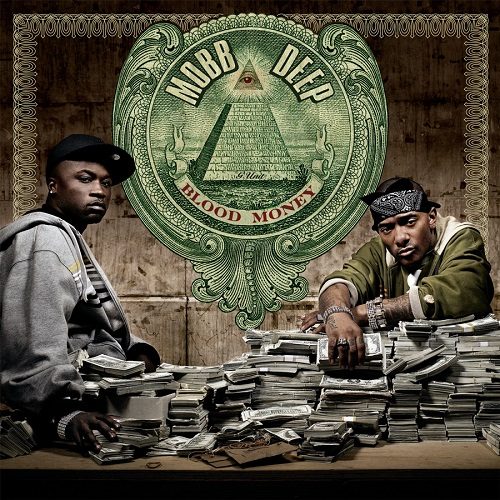 There’s something rotten in the state of Queensbridge. Mobb Deep are without question legends in their projects, legends in the city and state of New York, and legends of hip-hop nationally and worldwide. “The Infamous” have spread their grimy sound and their own unique “Dunn Slanguage” across the globe and have become among rap’s most imitated and duplicated artists. In fact Mobb Deep and the Wu-Tang Clan may have been the only reasons the mismanaged Loud Records didn’t fold sooner, as their records always consistantly sold to a large and devoted fanbase. When Loud did finally bite the dust, Mobb Deep’s services were available to the highest bidder. They’ve bounced around since and distributed through both Jive Records and Koch before become the latest members of the expanding G-Unit empire, joining the Interscope Records family.

In theory this kind of link-up should be a win/win situation, as G-Unit is among the hottest and most controversial cliques in rap right now, and Mobb Deep has the kind of veteran hip-hop stature and experience to give them the extra credibility and clout they desperately want since The Game’s public and contentious departure. Unfortunately “Blood Money” has in some measure turned Mobb Deep into G-Unit light. It’s not just that G-Unit guest appearances dominate the album, and there’s no mistaking the fact that they are on over half of the album’s tracks. The Mobb Deep sound itself has essentially changed. Before we get too deep into that (no pun intended) let’s at least address what they did right – the lead single “Put ‘Em in Their Place” is among the best tracks Mobb Deep has ever done. It sounds like a classic straight out of their large catalogue – heavy beats, slow drawled out lyrics and braggadocious New York flows that could only come from Havoc and Prodigy:

Prodigy: “I was schooled by the hood, raised by the wolves
Trained by the pain, adopted by guerillas
Gotta tank for a car, ice for a arm
Got tattoos wit’ skin and scars from brawls
Gotta buildin’ for a crib, Manhattan for a backyard
Skyscraper ladies, they fuck me when they man gone
Kings of New York, I’m one of the few of those
Difficulties to come, it’s gon’ be funerals
You get a quiet spot in the shade, for a grave”

Havoc: “Fast forward to ’06, gettin’ head in the ’06
Have a chick, feelin’ like she workin’ out on that BowFlex
I’m focused, looked through my lens, see my vision
Surprise myself and came through without one spool missin’
From that hallway kissin’, there was room in the Carlton
I can smell it in the air, P in that next room sparkin’
Me, I let that heady flow, meet me at the tele’ hoe
You don’t do the tele’, oh, fuck it bitch you gotta go
Workin’ wit’ a lot of dough, and a little bit of time
Bitch I wanna fuck, I don’t wanna know what’s on ya mind”

The rest of the album is scattershot at best. Production is one of the biggest flaws of this album. The quiet understated beat and erratic rimshot drums of “Stole Something” might work on a 50 Cent album, but sound completely out of place on a Mobb Deep album. “Creep” is even worse, sounding like one of Swizz Beats failed experiments that never should have been let out the studio, running up and down a synth with one hand without ever attempting to be musical. Other lackluster tracks include “Backstage Pass” (where Mobb Deep even start singing like 50), the soft tinkling piano key styled “In Love with the Moula” and the ridiculously over-the-top “It’s Alright” with 50 Cent and Mary J. Blige.

At times Mobb Deep do manage to cut through their restyled G-Unit sound and approach something more akin to their grimy Queensbridge roots, but even when they do there’s a problem with Prodigy’s voice. It’s hard to explain what happened to it or why, and it’s certainly nowhere near as severe as the change that happened to Darryl McDaniels (D.M.C.), but it’s just not the same any more. His flow is still as soft-spoken, measured and menacing in delivery, and verbally he’s still “strictly for the ghettos and hood” as he says on the Alchemist produced banger “The Infamous,” but you can’t help notice that it’s not quite as deep and dark as before. Havoc is still slightly higher, but his rap style hasn’t changed a bit. It really makes no sense whatsoever but the uncomfortable beats they flow over on a majority of this album don’t help.

When paired with their own dark style of music on tracks like “Speakin So Freely” and “Daydreamin’,” Havoc and Prodigy sound much more like the Mobb Deep we’ve come to know and love. “Blood Money” is a decent album simply for the fact it’s the long-awaited revelation of their new relationship with G-Unit, but in terms of their long career of certified bangers it comes as a slight dissapointment.