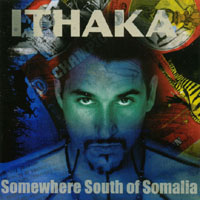 Remember when hip-hop used to say something? I don’t mean songs with a line or two that could possibly be interpreted as a “conscious” rhyme, but I mean cats like Public Enemy, X-Clan, dead prez, and KRS-One. These artists use Hip Hop as a vehicle to create change and amplify a voice, and devoted entire albums to the cause. Although that was one of hip-hop’s original intentions, the almighty dollar has altered hip-hop indefinitely, and not too many hip-hop fans want to be bothered with that shit that will make you THINK. With his album, “Somewhere South of Somalia,” Ithaka isn’t just trying to make you think, he’s trying to fuck you up and show you that there is more to the world than the block you rep. Forget the concrete jungle for a minute, Ithaka wants to talk about the JUNGLE.

First this album wins points for telling an ongoing tale from the first track to the last, a la Sticky Fingaz, Masta Ace, and Prince Paul. This is far from the usual get outta jail, rip shit up, go through life’s up and downs, then reflect on it with that reflective track at the end of the album. Ithaka penned “Somewhere South of Somalia” on a two month stay in Kenya and Tanzania. The album centers around Ithaka’s theme of escape and social commentary. “The Ugly American” is an example of Ithaka lamenting about a rich businessman who has moved to Kenya and kills endangered species for sport, cuts down trees, and rapes his maid.

“Bought a map, headed for coast
Bought thirty acres beachfront and brand new boat
Paid natives to burn down trees
Who the hell were they to disagree?
Needed room for tennis court and swimming pool
In this land to, rich usually rule
Built a house like no house ever seen
Fifteen bedrooms all fit for kings
A year later, palace complete
Bel Aire mansion in the African Heat
He’s paid his dues he’s paid the price twice
But his soul will rot in paradise
Electric Fence five-meters high
Keep out the crooks but the monkeys die
[…] He raped his maid but what can she do
Her mama needs medicine, her kids need food
But he’s a man, bad man, sick man, evil man
But a rich man and rich men rule the land
Killed a rhino while he smoked a cigar
High-powered shot from a moving car”

While Ithaka won’t dazzle anyone with his wordplay or linguistic flippin’, “Somewhere South of Somalia” still works lyrically. Ithaka’s flow is calm and mild, similar to a laid back Everlast. His delivery offsets the powerful meanings and lyrics he puts on a plate for you to eat. Some songs like “Snakes in the Rafters” will make you laugh as they depict Ithaka’s modest crib, complete with monkeys, snakes and spiders. Other songs like “Mwajuma” will no doubt get the synapses firing as you ponder Ithaka’s story of getting to know the female servant to a wealthy man, and the consequences affecting her life when she reveals to him that she is HIV positive. Put the boots on, cause this joint is DEEP.

All production is handled by Conley Abrams, who seriously put his work in. Most cuts are above average, as banging basslines are accentuated by slick guitar riffs, nice synthesizer loops, African drumming and cuts and scratches. Up tempo tracks like “Dugout Canoe” are sprinkled with a little old school flavor. If that ain’t your thing, you will NO DOUBT feel the saxophones and ill jazziness of tracks like “Lapis Lazuli.” All parts of the spectrum are covered beat wise, as Conley crafts slow bass heavy bangers for Ithaka to tell his narratives, to fast tracks with funk and techno influences, and then back to a jazzy groove, crafting the perfect musical landscape for Ithaka to travel over.

While Ithaka has been lauded in Europe (he has been nominated for 9 Blitz Premios, the Grammy of Portugal) and his previous albums have received critical acclaim, reception from American hip-hop heads might be lukewarm. The complex subject matter might go over the heads of a lot of listeners. I had notes, and I STILLhad to listen to it a few times. Even if a lot of Ithaka’s tale is absorbed, there is track after track, jam-packed with social commentary, and double meanings, broken up by some spoken word interludes, requiring some serious concentration to catch everything (wear the headphones with this one). Also, the average hip-hop head might not be aware of the current issues prevalent in South Africa, causing a feeling of disconnection from Ithaka’s subject matter, although anyone wanting to be enlightened could use “Somewhere South of Somalia” as a springboard to get started. While conscious heavy, “Somewhere South of Somalia” is a return of sorts of Hip Hop’s use as a tool to educate and advance. What is for sure is that Ithaka isn’t wasting any mic time, and we can’t be mad at him for that.