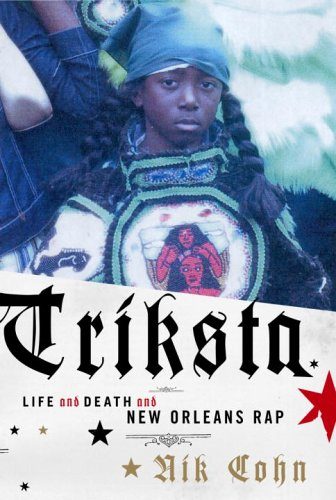 It’s not often gangsta rap fans get a serious book dedicated to the music they love. William Shaw’s “West Side” is the only book that immediately comes to mind. Luckily, British rock journalist Nik Cohn loves gangsta rap as much as I do, specifically the music produced in New Orleans. Though a 61 year old British journalist doesn’t conjure up images of “realness” or authenticity, “Triksta” digs deeper into the streets and heart of New Orlean’s rap scene than most albums produced by NOLA artists. The book tells the story of an outsider who fell in love with New Orleans bounce and went as far as producing tracks for one of its most well known artists.

Cohn’s story starts out with Soulja Slim’s death, the rapper who became much bigger after death than he ever was while still alive. Slim’s tragic story is told with detail that can’t be found elsewhere, including interviews from his mother about her son’s death. Though Cohn didn’t know Soulja Slim while alive, his death is probably the biggest of all New Orlean’s artists that have passed away throughout the years. Cohn’s story continues as his interest in Bounce music leads to connections with local label Take Fo’ Records, which is responsible for crucial bounce records from DJ Jubilee. Through his connection Cohn ends up working with Choppa of “Choppa Style”/ No Limit fame as he teams with Take Fo’ to try and get Choppa signed to a national deal. After the Choppa deal Cohn continues as a rep for Dreamworks Records and cuts demos with 3 N.O. artists before finally giving up on the rap game.

Cohn’s story is the same one of many entrepreneurs but with many crucial differences. His status as an outsider makes his story extraordinary and allows him to step outside of the dream of rap fame and give us a balanced look at the good and bad involved in the process. Through his own personal tale he also manages to give us a brief history of New Orleans rap overall. The biggest difference is that he put his story on paper and in the process permanently records part of the history of a city that almost got wiped out two years ago.

“Triksta” is highly recommended for fans of gangsta rap. The insight is one that can’t be found in many places and Cohn’s passion for the music is clearly transferred to print. A few warnings are called for. Cohn liberally uses the n-word in his work, either to stretch for authenticity or because as an outsider/academic he may feel his use transcends any taboos. Oddly, he also fails to make any mention of Big Boy Records while making multiple mentions of other major N.O. labels. The label was responsible for the careersof Mystikal, Fiend, and Partners –N-Crime so any book on N.O. rap should at the very least acknowledge the label. If you manage to get over those two things (and I admit the first one is tough to let go), you’ll find a unique story about a unique city’s rap legacy.