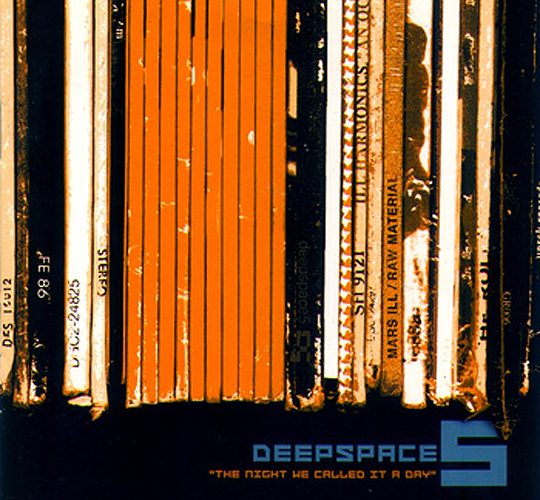 The Night We Called It a Day

Deepspace 5 :: The Night We Called it a Dday

To me, Deepsace 5 represents nothing but straight-up love for hip-hop. Here we have 10 men from all across America hooking up just to lay down some jams. We’re talking about a few friends who decided to put a record together just for the sake of good music. And good music this is. “The Night We Called it a Day” is, I think, about as far from mainstream as hip-hop can get. Sure, some would blow this album off as the dreaded “backpacker shit”, but if you come strapped with an open mind, you’ll find a lot to like here. Despite the group’s name, don’t expect to hear any sci-fi, hi-tech sounds. This is strictly ground-roots, MC/DJ, hard-core hip-hop. It’s creative, it’s experimental, but most importantly, it’s damn good.

You would call Deepspace 5 a “super group” â€“ that is, you would if any of them were big-name superstars. Comprised of members of various other rap crews (Mars Ill, ill harmonics, the Pride, Labklik), Deepspace 5 may not have huge star power to flaunt, but what they lack in fame, they MORE than make up for in the talent department. In fact, it’s hard to believe that a 10-person collective can come off sounding this tight. With all those members, you’d think there would be at least one or two dragging the group down, but that’s not the case. There are no weak links in this chain.

The six MCs (Soul Heir the manCHILD, Sintax the Terrific, Listener, Sev Statik, Playdough, and Fred Bruno) in Deepspace 5 are all plenty competent when it comes to rhyming. But while talented MCs are fairly commonplace these days, we all know how much harder it is to find a talented GROUP of MCs. What’s great about Deepspace 5 is the way they make the “group” concept work for them. They play off each other, they trade verses here and there, and they actually seem to draw the energy off of one another. This sort of business is the thing that, to me, defines what a rap group can (and should) really be.

Best of all, each of the MCs is good enough that he could be crowned Best in the Group. (Well, with the possible exception of Playdoughâ€¦ but I can forgive him easily, since he doubles as producer for three tracks, blessing the album with some of its best beats.) Personally, I feel like Listener gets those honors. With a voice like Son Doobie, this motherfucker steals the spotlight on EVERY ONE of the tracks he’s featured on. I’ve got one beef though: I could’ve done with a bit more vocal variety between the MCs. It takes a trained ear to differentiate between manCHILD and Sev Statik, and at first, Playdough, Sintax, and Freddie Bruno all sound the damn same. You get past that shit eventually, but it has a learning curve though. Then again, that’s only a very minor complaint.

I have to compliment this record’s producers as well. The aforementioned Playdough blazes the shit on “Take the Rhythm”, “Ziontific”, and “Joywriting”, while DJs Dust and Beat handle the rest of the joints. Awards for Best Track is a toss-up too. “F-Words” is a track that has its shit ALL together. But on the other hand, “Stick This in Your Ear” has a subtle flute sample (I am the biggest sucker for flute samples in hip-hop) and is without question the album’s hardest-rocking tune. It also boasts the illest lyrics, when Listener spits his lines with all the punctuation intact and spoken. He literally says every period, comma, and semi-colon found in his verse. I’m not gonna even try to quote it here, but trust me, it’s genius.

Being the “underground/backpack” album that it is, “The Night We Called it a Day” has more than its fair share of clever wit, punchlines, and playing on words. But, also true to that sub-genre, the album has a couple of stereotypical, if not minor, weaknesses. Namely, the group seems reluctant to bust out any party-starters, preferring to stay laid back and mellow. Also, some of the tracks start to sound the same towards the end. But like I said, these are minor problems, so it’s all good anyway. Look past those tiny flaws and you’ll find a fantastic rap album with enough depth to keep you coming back again and again. Hard beats and hard rhymes in a tight overall package is just the beginning here.

Deepspace 5 :: The Night We Called it a Dday
9Overall Score
Music9
Lyrics9