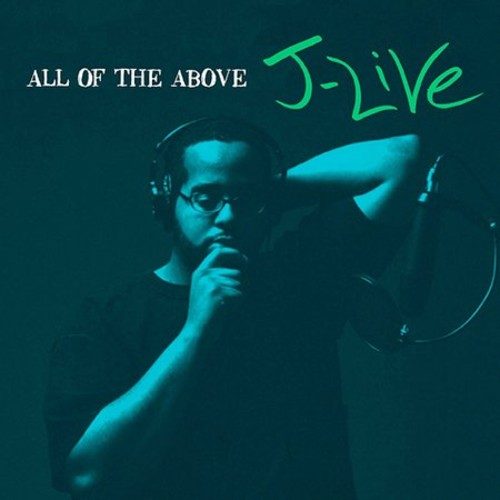 All of the Above

There are few names that carry as much credibility among hardcore hip-hop purists as J-Live. Live has the ultimate underground trifecta: a syrupy golden voice that flows rhymes like the Nile, beloved underground singles like “Braggin’ Writes” and “Them That’s Not,” and a SIMPLY STELLAR debut album which got shelved as the byproduct of a bad record deal gone worse. Could a rapper possibly have more credibility in the bank than J-Live does? It’s hard to imagine.

To be sure, J-Live is not the first hero of underground rap who fell victim to Industry Rule #4,080. The difference here is that J-Live is not content to be like a lot of other rappers who come up in, “Say – whatever happened to…?” conversations. The easy way out would be for J to fold up and say, “Fuck the music business, it’s not worth it,” but instead he’s decided to take another stab at it with the album “All of the Above.” J explains this decision right from jump on the inside jacket of his album: “Basically, I’ve got a bunch of stuff on my mind. I’m just trying to put as much of it on record as you can stand at one time.”

Too modest J. What most fans of beats and rhymes CAN’T stand is how lesser MC’s masquerade as lyrical champions with half of J-Live’s lyric writing ability and a third of his charisma and skill. Listening to J-Live is never a dssapointment or more than you can stand, and he proves this right from the start on the witty “First Things First.” If you only listened to the first 163 seconds you might mistake this for an intro or a skit, but J-Live’s not wasting this opportunity to set the record straight with his opening salvo in round two of his war on mediocrity:

“First things first, I just – got through, goin through
this ordeal, dealin with deals, you know the deal
I’ve dealt with, bein dealt dirty, downsized
and duped, done double-paid my dues, for real
I just – know today’s degree, C lesson
Not nowadays, can a record label fool me
So the understanding’ll be ‘The Best Part’
No need to guess how this rocky road was meant to be”

With his introduction out of the way, J ups the ante a notch higher with the Joe Money produced jam “How Real it Is.” The song title is both the question and the answer for J, who starts out with a deceptively simple analogy of the world as a video game:

“Where the quarter only gives you one life
So you better push the buttons just right (welcome to my world)
Where any given second, anybody can get it
You better hold on tight..
.. cause life can take a turn for the worse
and have you switchin from the Coupe to the hearse
You better peep this verse; the streets ain’t no joke
but maaaan, the sidewalks might get you first
So wherever you rest, you better don’t sleep
It’s like Denzel said – you could either be a wolf or a sheep
And that even criminology; I’m talkin bout
the everyday 9 to 5 people STILL gotta fight the evil
You could ride the fast lane or the train
The illest weapon you could load ain’t your 9 boy, load your brain”

It’s tempting to infinitely quote J-Live’s manuscripts, as each lyric reveals both pearls of wisdom and a sardonic wit that chuckles at the struggles of life while holding up hope for better days. The first single “Satisfied?” epitomizes this paradox with a parable about the World Trade Center: “Aiyyo the ants still steal/the anthrax got my Old Earth wearin a mask and gloves to get her mail/I know an Older God that lost 12 close peeps on 9-1-1/while you kickin out punchlines and puns.” You might think J was bitter and hardened if you judged by these lines, but he’s just a battle-weary veteran with the wisdom to know that no matter what people say some things never change:

“But now it’s all about, NYPD caps and pentagon bumper stickers
but yo – you’re still a nigga
It ain’t right them cops and them firemen died
That shit is real tragic but it damn sure ain’t magic
It won’t make the brutality dissappear
It won’t pull equality from behind your ear
It won’t make a difference in a two party country
if the President cheats, to win another four years
Now don’t get me wrong, there’s no place I’d rather be
The grass ain’t greener on the other genocide
But tell Huey Freeman don’t forget to cut the lawn and
uproot the weeds, cause I’m not satisfied”

Lest you got the wrong impression, J-Live is not this serious on every single note – he’s serious about his skills but that also means he can seriously flip the script, as he does on the self-explanatory AND self-produced “MCee,” where even he has to step back and ask, “Can you believe I do this shit for a living?” With braggadocious quips like, “It’s ill cause my role models are my peers now/and my thoughts’ll be in your ears for years now,” it’s only hard to believe he hasn’t made a BETTER living at it to date. As such you’ll enjoy the double entendre of his ode to womanly pleasures on the Joe Money gem “Like This Anna” or his equally sharp pianos and snares on the quintessential “One For the Griot” where J-Live spits a verse and then keeps changing the ending to the story in his rhyme at the insistence of a disbelieving listener.

For those who heard his discontinued full-length debut, don’t expect anybody as big as DJ Premier to show up with beats this time. The most significant outside producer to bless tracks is DJ Spinna on the title track, “Do That Shit” and “All In Together Now.” With fresh beats by J and Joe Money they don’t NEED the extra big name help. When you the haunting melody of “Nights Like This” you know the blessings are in full effect, but it gets even iller on J-Live’s self-produced “The 4th 3rd” though – a song in which J speaks of a woman who obviously is everything a man could ever ask for:

“The way I lived for you was as if I’d die with you
Cause not a moment I spent witchu was artificial
The plan from the dome was to build a home witchu
Forever had a space in my heart, I’d roam witchu
Hypothetical dreams conjured when I met you
See years grew between us and still I can’t forget you
Regrettin how I ever let you, let me, let you
escape fool’s paradise, runnin from a paradox
Livin like a pair of ducks but we’re different flocks
With different destinations our ships remain docked
Temporary, but the feelings that I harbored still weighed
in the holy waters that made our sweet lemonade
Too dumb to persist, too smart to persuade
Too heavy to push aside, and too strong to stay
Too hard to work but so easy to play
like chopsticks but our picks slipped away
Leavin me to recollect day by day
and take solace in the words Bill say:
Memories take you back.. to the good times..
when it’s over.. and the sad times disappear..”

The mark of a brilliant and captivating storyteller is when every word leaves you hanging on for the next, and in this respect there is no question J is as Live as they come. That’s why even after “Happy Belated” you’ll be hanging on for the bonus tracks “3 out of 7” featuring Asheru and El Da Sensai and “The Lyricist” – a very aptly named track to close out this album. J-Live takes lyricism back to the day when good writing and good delivery meant more than a good sample to rap over or a good guest to sing on the hook. For every reason that “The Best Part” failed, chalk up a reason to hate the music industry – but then turn around and give thanks that they got it right this time on “All of the Above.” Suffering only by comparison to his legendary unreleased classic, this is in all other respects a brilliant album miles above and beyond what any of his contemporaries are doing now OR far into the foreseeable future.

J-Live :: All of the Above
9Overall Score
Music8
Lyrics10