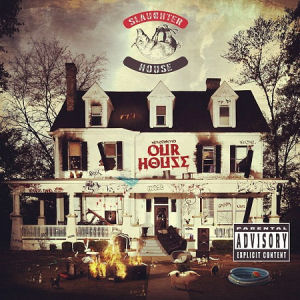 Slaughterhouse :: Welcome To: Our House

A recent e-mail sent to myRapReviews inbox asked a short but straight to the point question: “Y NO RVW OF THE NW SLAUGHTER?” There are several reasons I hesitated to do it. One was the possibility I’m unfairly biased toward the album given their titular debut is one of my favorite albums of the last five years, one that I still listen to on a regular basis long after most people had put it on the shelf. Another was the fact I was underwhelmed by the free mixtape they put out a week before the new album, which led me to believe I might find the new CD disappointing. Last but not least is the fact I assumed so many writers on staff would be clamoring to do it that I wouldn’t need to write it up myself. Everybody’s tied up with their own projects to write about though, so it falls to me to put on some Hammer pants and do a “Hammer Dance” for the return of hip-hop’s most Fantastic Four.

“Joey – my real name my rap shit
Fuck with Chase but the real Bank is the mattress
Money ain’t new to me, been gettin G stacks
since Smooth B took his shorty back from rehab
Knife work with me but the chrome is extra
case I’m in the same taxi as +The Bone Collector+
Uhh, y’all rappin ’bout models I get hounded by ’em
Not a killer at all, I’m just surrounded by ’em
Just a real nigga, straight from my mother’s stomach
Ain’t enough cloth for all of us to be cut from it
Not decided by who toast lead
Cause all of us will be +Angels+ for Pujols bread”

One of the biggest changes since their debut album is the presence of Eminem, who is all but an honorary fifth member of the crew at this point. He has a production or co-production credit on 16 out of the 20 tracks on the deluxe edition (the only one worth buying), and makes vocal cameos on 3 of them: “Asylum,” “Our House” and the current single “Throw That” on which he pulls double duty with the help of T-Minus. His presence is less dominant than one might think on this one though, since he sings the hook rather than rapping a verse, and just ad libs to punctuate punchlines throughout. The original foursome still remain the stars of the show.

“I’m Crooked I, a/k/a Fuck Yo’ Girl (throw dat dick)l
Up up in the sky, when it come down say FUCK THE WORRRRRLD!
These strippers are sprungl
My middle initial is awful Richard and my nickname’s right on the tip of her tonguel
The side of her mouth is drippin with (EGG!)l
Uhh, I’m drunk right now, stumped right nowl
Tryin to figure out how to get four chicks to sit on one chair
Oh yeah turn the chair upside-downl
Upside-down? I’ll throw this grip on you girl
Talkin that handcuff, you ain’t never comin home, man finna trip on you girl”

The thing I was looking for more than anything else though was the rap songs as raw as their name implies, as bloody as songs from their debut album like “The One” and “Lyrical Murderers.” A few of the songs approach that level of irreverence and punchline knockout blows. “Frat House” is on point, reuniting the T-Minus & Eminem teams and featuring a tag team verse by Joe Budden and Joell Ortiz harkening back to the debut, though it’s Crooked I’s “blowjobs are flowers for men” line that steals the show. “Get Up” proves that after 20+ years in the game as a rap producer, No I.D. has not only not lost his touch but is HEAVILY underutilized by today’s top talent. Despite the crossover potential of putting Skylar Grey on the hook, Alex Da Kid’s backdrop for “Rescue Me” is surprisingly gutter and verses like Joell’s are deep and dark:

“Some stupid bitch done turned my girl against me
Should’ve tattooed the Earth on my arm, feel like the world against me
Soon as I pa-rade here come the rain fallin, the name callin
from the cuz I never met with his hand out like I’m straight ballin
Feel like I knocked the 8-ball in
Every time I shoot a move I literally can’t call it
Am I afraid of success? Let me think on it, I just got nervous
Let me drink on it, think I just answered yes but not on purpose
I pass the church and do the Father, Son and Holy Spirit
But I’m only near it, man I need to pass the service
I’m drownin cause I’m so tired of treadin
So Lord when you get a second, please”

Not to be outdone though, Crooked I raps about dreaming of being murdered in his sleep, and Joe Budden fantasizes about slashing his wrists with a razor. One might mistakently think Slaughterhouse are a group of prescription pill addicted manic-depressives, but the secret to their success individually OR collectively has been their ability to mine the depths of darkness in their lives and share it with you on wax. The reason Slaughterhouse works so well is the team dynamic forces them to go even harder, pitting talent against talent, like having Dwayne Wade, LeBron James and Chris Bosh on the same squad. Nobody wants to be the weak link when all of your teammates are all stars. Conversely it also allows them to be freer with their emotions and their jokes, knowing so much backup is there for them. It comes through loud and clear on songs like “Park it Sideways” and “My Life” featuring Cee-Lo Green, where there’s no doubt they’re having fun.

Crooked I: “House on the hills, thousands and mills
Gettin wild in the field with your spouse in Brazil
On ounces and pills, how does it feel
to count dollar bills that I pound off, skills
Check it out – jets, fly, pri-vate
Nigga S-5, hy-brid, baby test, drive, my, whip
I’m in Bed-Stuy, with my, chick
On my West, side, fly, shit
Pullin out minks when the weather get +Chili+
+Left-Eye+, side-kick
Huh, now don’t you niggaz go chasin +Waterfalls+
These bitches wall to wall
And they love them Slaughter balls”

Now the $64,000 question is simply this: “Does the 2012 Slaughterhouse stack up to the 2009 Slaughterhouse?” My unqualified answer is that it’s a 90% yes. That’s NOT because they got 10% whacker in the last three years – far from it. The skills if anything have been sharpened by touring together, recording together, writing and promoting together. It’s more a factor of the production, which can’t quite edge out the original even though it’s certainly good; it’s more a factor of the fact that with 80 minutes of material you can’t maintain the consistency of one only 56 minutes long. The debut was unexpectedly good and remains a classic. The official sequel to it was EXPECTED to be good and it is. Is it a classic too? Perhaps not, but it’s not a let down in any way, and it’s damn good. I won’t take this one out of rotation any time soon either.