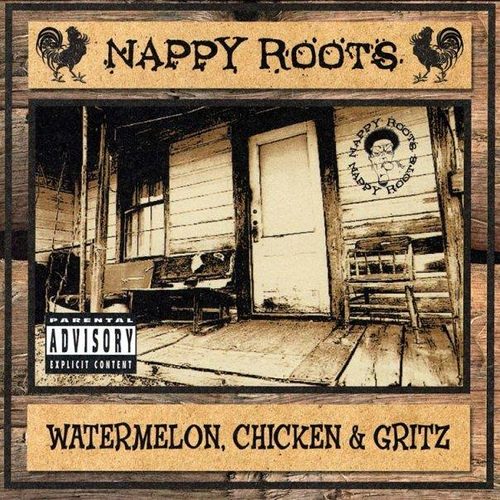 Aww naww, hell naww – man, they done up and done it. The Nappy Roots creeped on a bigger come up than Bone Thugs-N-Harmony and did it by slipping into the industry via South Park. The “Bigger, Longer & Uncut” soundtrack included their clever “Riches to Rags (Mmmkay)” re-interpretation of Mr. Mackey’s catchphrase, but it’s likely that most hip-hop fans never even noticed. Out of twenty tracks, the only other rap songs are a duet between Kid Rock and Joe C (R.I.P.) and “Shut Yo Face (UncleFucka)” featuring Trick Daddy and Trina; so it’s likely most hip-hop heads passed unless they were South Parks fans and also went to see the movie.

Three years later, the return of the Nappy Roots was so unexpected that “Awnaw” was an ironically perfect title for the first song off “Watermelon, Chicken & Gritz.” If you’re already up in arms over the title, lighten up a bit – the Nappy Roots are both celebrating AND poking fun at the conventions of the Dirty South. After all, how many rappers do you know who would call themselves Fish Scales? He’s no fool though; just peep these lyrics from the single:

“My first song was like forty-eight bars with no hook
You hear me flippin through my pages out my favorite notebook
The microphone was in the closet (What?) No headphones, we lost it
Niggaz scared to get some water, roaches hangin over the faucets
No A.C., Tez’ll break a sweat just tryin to make beats
E-Dubz was bein a hustla, flirtin with all his customers
and flat broke; Nappy smokin blacks out on the back po’ch
I’m thinkin I got everything a country boy could ask for”

Scales higher pitched delivery is balanced out by the deeply resonant vocals of Big V, who is a pleasant mixture of Scarface and Xzibit in flow and delivery. No slouch in the lyrics writing either, V at one point quips “hated for the cussin, but the hatred it made us cuss more.” Like Goodie Mob before them, this group shows pride in their roots (no pun intended) but as V himself says, “Bein here is alright, but MUST believe we want more!” Rounded out by rapper Ron Clutch, the country drawls of Skinny Deville and B. Stille, the musical flow of R. Prophet and the production of James ‘Groove’ Chambers, this group’s style and diversity packs more punch than Purple Passion.

It’s rare to hear a first major label album from a new group that is so complete in it’s presentation, but the Nappy Roots prove that the time off between “South Park” and today was not time off at all – just more time to perfect their sound. Nappy Roots didn’t neglect to include the 1200 in their new-fangled ol’fashioned Southern hip-hop, as you’ll hear background scratching on both “Hustla” and vinyl instrumentalism throughout “Set it Out” – and these are the FIRST TWO SONGS. So many groups and soloists in hip-hop today think they can get by without a DJ, but when you listen to these songs you’ll realize just what it was they were missing. Humor is another element they include that so many contemporaries are missing – you’ll know it when you hear “Ballin’ On a Budget” or the smooth Trackboyz produced “Po’ Folks” when Big V quips, “Nappy then, nappy now, nappy for a bit – knee deep head over heels in this country shit!”

There are a few tracks that don’t work though, and as stellar as this debut is one would be remiss not to mention them in a review. “Start it Over” has an electronic style beat that doesn’t complement the group members well (R. Prophet in particular suffers the most), “One Forty” tries to be bouncy but isn’t musically catchy enough to be on hit, and (this is a minor complaint) calling “The Lounge” a bonus track when it’s just another skit ain’t cool at all. However these flaws are so minor compared to the songs like the funky “Ho’ Down” featuring the Barkays and the Troy Johnson produced “Dime, Quarter, Nickel, Penny” that it’s almost impossible to hate. If you were lucky enough to catch their indie label debut “Country Fried Cess” and liked what you heard, or checked out “Rags to Riches” or “Awnaw” and thought, “Who are these funky brothers from Kentucky?” then “Watermelon, Chicken & Gritz” is right up your alley. Like a good plate of cajun food, every bite reveals more of the flavor you just can’t get enough of even when your mouth is burning and the glass of water is bone dry!