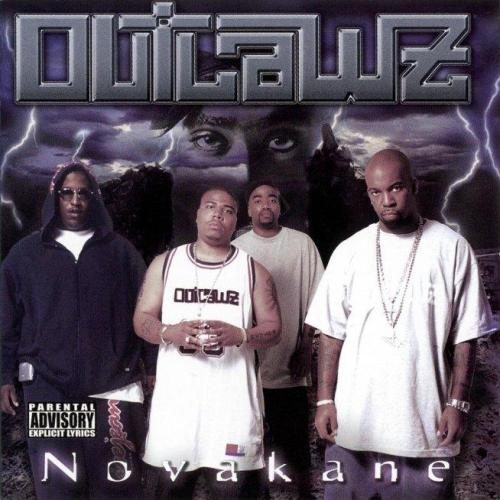 Considering the magnetic attraction that their mentor wields well beyond his death, the Outlawz should be a household name way beyond hip-hop. If there’s one thing that Tupac Shakur has evoked in his followers, it’s loyalty. You would expect this loyalty to be beneficial to his most loyal footsoldiers, the Outlawz. Only a few years ago they were featured on “Baby Don’t Cry”, one of those post mortem ‘Pac singles that rotated heavily on radio and TV stations, and they were finally able to release the well-received collaboration CD “Still I Rise”. The Outlawz and Tupac go together — that fact should by now be well established.

For whatever reason though I don’t see the Outlawz catching much spotlight with their own albums. What I personally like most about this crew is that they never tried too hard to be like Tupac themselves. Granted, they are inspired by his work, but none of the current members ever had the audacity to set himself up to take his place. We know there are others who would love to do just that. Sure, there’s always the negative mind that will dispute that the Outlawz are up to their task, but the fact remains that ‘Pac chose these young guns to ride with him in this rap game, so when he died, they were automatically appointed to carry on the torch of the true thug mentality.

Now what is this ‘thug mentality’, you might ask? Study the life and records of Tupac Shakur. You might not come up with a satisfying answer though, because even the creator of the term ‘thug life’ himself wondered what it was all about: “I’ll probably be an old man before I understand / why I had to live my life with pistols close in hand” (“When Thugz Cry”). Tupac gave out the “Definition of a Thug Nigga” in 1993, and he abode by the code from the moment of its inception until the day his thug livin’ was so sadly cut short:

“I play the cards I was given, thank God I’m still livin’
Pack my nine till it’s time to go to prison
As I’m bailin’ down the block that I come from
Still gotta pack a gun ‘case some young muthafuckas wanna play dumb
I guess I live life forever jugglin’
But I’ll be hustlin till the early mornin’ cause I’m strugglin'”

The Outlawz are well advised to show some of that understanding that Tupac ultimately was lacking, learn from his death and let it show in their songs. They do that too, but they also represent those who still juggle to make ends meet in their struggle. There’s a reason “Rize” is first up on this album. Noble: “Pac left the Thug Life laws to follow / and I’m O-U-T, loyal ’til my casket drop”. Napoleon: “Outlawz comin’ through / nothin’ but trouble too, we still do the shit that Pac used to do”. E.D.I.: “Reppin’ that thug shit until they bury or hide us / tellin’ all of my street soldiers to rise up”. Big Syke, going all the way back to Tupac’s first group concept, Thug Life, sums it all up in his seasoned veteran’s stance:

“Makaveli, Kadafi, Mental, Big Kato
Only ridaz in this stable, killin’, willin’ and able
Gang Related Incorporated, you can’t fade it
Haters gotta hate it, ridaz glad that we made it
Back to take it to the next level
Now change the game, fuck the fame
Bang, nut, scrape on the hang
It ain’t no thang to rise above the rest
Pass any test, you mention Thug Life you mention the best
So invest in a vest, come bang with the best
The sun rise in the East but my set in the West
Still risin’ for my nigga Stretch, keep a Tec
My paper stay risin’ whether cash or check”

There’s no slowing down for now. “This Is the Life” is some more of the uncompromising stuff that the Outlawz first were known for. The mentality displayed here is: if nothing in life is promised, you better force it from that motherfucker. Equipped with a mobbing beat courtesy of Shorty B, “Ghetto Gutta” serves as an “introduction to the Outlaw lifestyle”. It might not be especially glamourous, but you can still turn your nose up if you live it: “I’m with my family and I’m feelin’ like ‘fuck y’all’ / I can’t see a damn thing but us, dawg / Makaveli lived some shit, I’m the fuckin’ proof / second generation Thug Life, who is you?” asks E.D.I. arrogantly.

Next up we have a potential single. It can be argued that “Our Life” is dipped into the same pasty pop sauce as Pac’s postmortem singles, but if the Outlawz want to be THE Outlawz, then I see no wrong in aiming for the same amount of listeners. Like Pac they still rise above any notions of happy, poppy nothingness. Because they could never act like nothing ever happened after everything that did happen: “In ’96 we was on top of the world / videos, movies, money, jewels and girls / Rolls Royces, Hummers, Jags and all that / hard to believe one night in Vegas changed all that / Fast forward 6 years, man, we still here / despite bein’ hated on it’s still clear / until the end of time you can’t stop destiny.” From Napoleon opening up: “I’m damn near about to go in tears / writin’ this verse here / I feel like I’m cursed here / I’m choked up since I lost my peers” to admitting: “Life – just so much pain to me / to tell the truth, I don’t wanna die angrily” right down to a brilliant last verse from Kastro you can feel that these lyrics were written in blood, sweat, and tears.

But it ain’t over till you hear “2nd Hand Smoke”, flat out one of the most overwhelming rap songs I EVER heard. You can’t have a great rap song without a great beat, and in this case some guy named Joey Glasses comes up with an array of acoustic guitar-plucking that tells a story of its own. There is faint harmonizing in the background while a subdued beat ticks away to lead the rappers through this musical crystal palace. The song is so intriguing because the Outlawz use a multi-layered metaphor and still talk in a clarity that rivals Tupac’s writing. Yet at the same time “2nd Hand Smoke” goes conceptually beyond of what you’re used to from him. To sum it up, the ‘second hand smoke’ describes the parental and social neglect their generation is suffering from. It also serves as a warning to a younger generation not to repeat the mistakes made by the older generations. Again, the Outlawz have their thoughts in sync, from Noble’s

“I’m like a ball of smoke, blown from a crackpipe
into the hands of the streets, my father to be
since the age of 5, real cold you gotta be just to stay alive
We the second hand smoke of a fiend generation
swear we will but they know we won’t make it
Smokin’ a cigarette, breathin’ your last breath
Tastin’ my own death, rest on my home steps”

“I’m ’bout a half a mill from a half a mill
and I’d still be this real without a rapper deal
and thus – I fight a truck for a pot of luck
and bite dust so my kids don’t hurt this much
We come a long way, still we got lots to learn
we – toss and turn like a roster burn
So I’m concerned, youngsters, I’m still amongst ya
we grew up in the sewer, raised up in the dumpsters
It’s like we all suffer for somebody other
born from my daddy to my baby mother
All my folks, all born with high hopes
cryin’, dyin’ from second hand smoke”

Such highlights shine too bright for other, less convincing songs to leave any lasting impression. “History” with sometime pop superstar Seal aims high, but eventually falls flat of turning into anything I would like to listen to again. Songs like “So Many Stories” (featuring Napoleon’s brother Kamillion) and “Die If U Wanna” can be heard on any third-rate gangsta rap release. Cuts like “Red Bull & Vodka” and “Boxspring Boogie” are downright awful. That’s where they should have listened to their father figure more attentively. Party joints are not their forte. Yet “Novakane”‘s lead single bumps in best West Coast tradition. Since there seem to be no more 2Pac/Outlawz collaborations left, they recorded new lyrics for a ‘remix’ of “World Wide Mob Figgaz”, a song found on his double disc “Until The End Of Time”. “World Wide Remix” isn’t exactly a club banger, but it still works with T-Low of Next on the hook and its funked up barebone track with sparse sprinkles of steel drumming.

Overall though the beats leave much to be desired on this record. And while Kastro, E.D.I., Noble and Napoleon show promise in songwriting, they fail just as often. In the end it remains unclear if the Outlawz really are “the only squad alive that can bring Pac back” (“Y’all Can’t Do”) and whether this is exactly what we want them to do. They do bring him back, in a sense – by simply being the Outlawz. And since they don’t want to leave the rap game just yet – what else are they going to do? Stop mentioning him? Stop remembering the dead, when they lost another Outlaw in Kadafi? In reality Tupac Shakur needs the Outlawz to watch over his body of work and fight off the pack of hyenas who are quick to steal away with pieces of his legacy whenever they think nobody is looking.