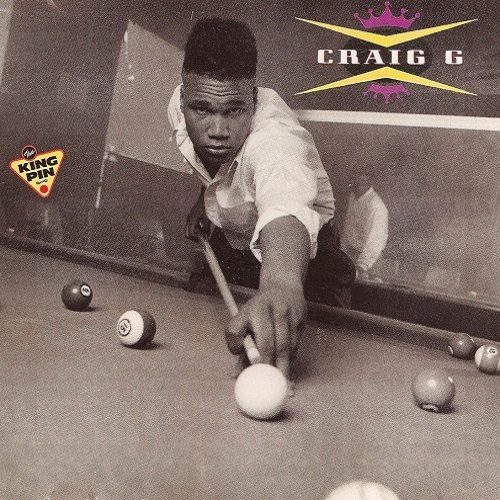 Let’s explore the mystery of being wack. Many people mistake something they don’t like for being wack. When in fact ‘wackness’ is a quality attained by clearly defined attributes. It’s when your song concepts don’t work, when the sound quality is a mess, when your flow wavers all over the track, when your weak voice should’ve never left the box, when you try to copy other rappers’ styles, when your rhymes don’t really rhyme, when you use corny similes, when you obviously don’t have a clue what to rap about. It’s not realizing what’s dope. That’s wack. But what’s so mysterious about that? The point is that it can basically happen to anyone. That’s where it becomes a mystery to me. You never know when someone will catch the bug. You expect a rapper to come through as usual only to realize that he’s suddenly turned wack overnight.

The same goes for producers. And what a fine example we have here, “The Kingpin” by Craig G and Marley Marl from 1989. Only a year prior to that they made a song that left such an impression on me that to this day when I hear it, it has me thinking that they are indeed, just as they claim, “the dopest duo coming out of Queensbridge,” despite Mobb Deep, despite Nas, Nature, Tragedy and Cormega, despite Shan really being Marley’s main MC. “Droppin’ Science” was the name of the song, and it was featured on the same album that had what many believe is the best posse cut ever on it, “The Symphony”. Need I mention Craig G was also part of that? So how in the hell do we go from “Droppin’ Science” and “The Symphony” to this here wackness-defining debut album in just one year? I just don’t understand it. It had me comparing studio engineers, record labels, mastering companies.

On the follow-up to his first “In Control” compilation, Marley Marl claimed in 1991 that he “never made no bullshit.” Yes he did. He came up with beats so wack he jeopardized not only Craig G’s but his own career as well. I think to some degree we can blame the label, Atlantic. Cold Chillin’, where Marley and his crew usually hung out, gave us plenty of dope albums, because it was run by hip-hop heads. Atlantic, on the other hand, was a label with a rich pop tradition. Looking back, it’s evident that Craig G was hoping for something that never could come true when he wrote in the liner notes: ‘To all Atlantic rap artists, D.O.C., KwamÃ©, Breeze, Doug Lazy, Cool C, Gizmo, MC Lyte, Positive K, let’s bring this label to the top as far as rap is concerned.’ Well, with his own attempt he failed miserably.

The worst aspect of this album is the horrible sound mix. Somewhere in the process of producing this album, someone fucked up badly. I’m aware of the fact that Marley has successfully experimented with distorted sounds, indeed he has helped introduce the defining element of rawness back into hip-hop that old school records were too eager to clean up. But what’s happening here is really a sound engineer’s nightmare. The bass is not only constantly overdriven, it’s also buried deep down somewhere below the basement. And that coming from the man who gave bass to hip-hop. I never thought I’d say this, but this album has an over-abundance of pointless scratching that for the most part doesn’t even sound like ‘scratching’, but produces some non-descript swish-swoosh sound. On top of that most songs are uptempo, which fortifies any blurring effect. If a DJ would spin these tracks, you’d think the club’s soundman is slumped drunk over his mixing board. Being of a blues and funk heritage, hip-hop has always had a sense of timing and pausing, but these tracks are crammed tighter than my bowels just before I’m about to take a shit. As for the melodic bits, they are of such a simplistic nature they make Swizz Beatz look like Mozart. And it just goes on and on, from “Love Thang” down to “Smooth”, passing by two sickening hip house efforts, “Rock the House” and “Turn this House into a Home” that even fail to meet hip house’s already low standards. I remember house music producers getting dissed for making the occasional hip-hop track. It also goes the other way around, you know?

A special characteristic of wackness is that you fail to realize you’re wack. I can only shake my head in disbelief when I hear the sequel to “Droppin’ Science”, “Dopest Duo”, where Craig proclaims, “we let ’em know we’re the best in the neighborhood / cause comin’ back once again on the scene is / the dopest duo comin’ out of Queensbridge.” Damn, he even ruins his earlier accomplishments with this album. So whether it’s the timid “Shootin’ the Gift” or the loud-mouthed “Slammin'”, it’s really worse than I could ever describe it. Lyrically, ain’t not much happening either. All of his shortcomings come into effect over this dull tapestry: the forced intonation of phrases, the lack of things to talk about, the much too basic bragging and battle rapping. For God’s sake, Kid ‘n Play were better rappers. “Love Thang” he tries to illustrate with a few selected stories, but he keeps getting butted by the track, urging him to hurry on to the next wack track. He tries multisyllabic rhyming, but it’s not really relevant because he still writes the book on simplistic rapping. The following is even one of the more prolific pieces:

“Brothers try to play me like I was Sega
but once it comes to dope rhymes, I got mega
know what I’m sayin’, no one can overpower me
and I write some of my dopest rhymes hourly
You couldn’t do it cause you’re slow like a turtle
my voice jumps over rhythms like a runner does hurdles
So save your weak shit for the next day
because I see through your vocals like a x-ray
And if I hint that you might break
you’ll be put to rest, you soft light-weight
You won’t live happily ever after
cause you’ll fall victim to The Final Chapter”

He has a nice set-up for “First Day of School”, a topic everybody can relate to, but the story of last year’s wallflower miraculously turning into this year’s beauty queen is told in such a basic junior high essay style it makes Young MC’s “Principal’s Office” look like a college term paper. So Craig’s “I’m not a rapper, I’m a musician / or should I say poet? Yeah, that’s a good position” claim is sure to backfire. There’s no relation to his personal life in his lyrics whatsoever, even the love song, “Why’d You Have to Go?” (whose only saving grace is singer TJ Swan), sounds like ’80s love raps 101. Good thing Extra P and Main Source came along with “Looking at the Front Door” in ’91.

If I wasn’t so mad about Craig G blowing his one opportunity in such a disgraceful manner, I might laugh at this album’s wackness. And sometimes I do, but then I think of “Droppin’ Science” and of what could have been, still baffled by how someone could release such a piece of junk in 1989, after people like Run-D.M.C., L.L. Cool J, Public Enemy, Boogie Down Productions and N.W.A had pushed the artform to new artistic heights, let alone his former Juice Crew buddies Big Daddy Kane, Kool G Rap, Biz Markie and MC Shan who all have been blessed by Marley’s Midas touch (which I now deny to him). It’s not like we’re talking about some hip-hop stone age here, where DJ’s were spinning the wheels of stone and MC’s were holding bones as microphones, in many ways rap was more advanced than nowadays. Check the archives.

This is all the more frustrating as on two occasions he hints at something, a special quality that in the end has led to Craig G still being around today. It’s his humor and quick wit that makes him one of the crowned champs of freestyle to this day. On the title track, his voice sounds even more arrogant than Cool J’s in “The Boomin’ System”, although the lyrics don’t really correspond. But these were signs of an acting talent which had yet to be tapped. The lonely highlight on this album is the closing skit, entitled “The Blues”. Here Craig sings the hip-hop blues, not only explaining why he isn’t on Cold Chillin’ like everybody else (“I was on this company – named Cold Chillin’ / they took my royalty checks, them muthafuckin’ villains”), but also why “The Kingpin” turned out to be such a dud: “Marley got an engineer – his name is Mit / when the session gets underway, he always fuckin’ up shit”. Guess it was all +his+ fault, huh?