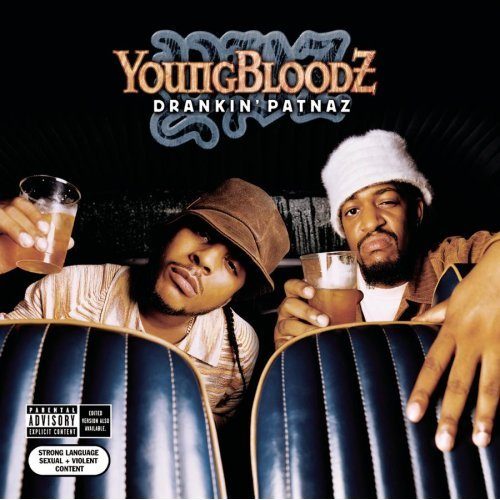 Nearly four years ago to the day, the Youngbloodz released their national debut “Against Da Grain.” Since that time LaFace put very little muscle into promoting the group or putting out a new album. It seems they finally passed the buck to So So Def, although to the trained eye that only means they got shuffled to a different division of the parent company Arista Records. Regardless, it seems to have been forward progress. After many delays and push backs the album “Drankin’ Patnaz” has hit retail stores online and nationwide.

If you’re unfamiliar with the group from then to now, the short story on their debut album is that the Youngbloodz put having fun in their raps above being the hardest, toughest G’s or catching the most bodies with their guns. For the most part that remains true on “Drankin’ Patnaz,” an album whose title may be self-explanatory. Released earlier this year, the unofficial first single “Cadillac Pimpin'” summarized their vibe perfectly. Over an R.O.B. beat, J-Bo and Sean Paul (not to be confused with the reggae artist of the same name) laid down their tale of driving big cars and drinking big drinks:

J-Bo: “We rollin through the spot to see which hoes gon’ follow
Cause we get Cootie Brown, pass around the bottle
With a gloss so clean, I put this thing in throttle
Lean forward, how we cruise in the wind like Roscoe
So you gon’ know us when you see us when we ride on by slow
Cause this shit’ll never end through the eyes of my foes”

This success was followed up by “Damn!” featuring (and you guessed it, produced by) Lil’ Jon. Like any of his popular hit songs, the beat is unabashedly hardcore. It starts out surprisingly soft while Sean Paul spits the first 8 bars, but then a pounding bassline starts inciting Jon’s trademark “go crazy in the club” vibe. The chorus ramps up the intensity with Jon screaming “Don’t start no shit, it won’t be no shit!” Out of the whole crew though, J-Bo balls the hardest:

“I post up, get to it, drink hand in hand
They call me Mr. Herringbone cause that’s my right hand man
Old school straight foolish like no other indeed
With Lil’ Jon it’s Youngbloodz, they crunk as can be
Attic Crew 105 that’s if you lookin to rumble
Cock back bust aim now I done got yo’ numba
In the club you gon’ feel it when it drop this summer
Like rain we gon’ pour and hit you hard like thunder”

A good Youngbloodz track only needs two things – a beat you can bounce to and the two rappers talking about “mean muggin like a muthafucka, my hand on my dick” as they do on “Whatchu Lookin’ At.” The Bloodz seem a little more gangsterish this time, with more references to “my gat in my pants” and trademark Southern phrases like “grippin’ the grain” (for the know-nots: a steering wheel with a woodgrain finish) while “ridin dirty on probation.” The tough talk doesn’t surplant the bottom line though – funky beats so the rap duo of the Attic Crew can flow nicely. Best examples of this working correctly include the Trackboyz produced “Hustle,” the chord progressions of Mark Twayne’s heavy “Mud Pit,” Mello’s Slip-N-Slide sounding horns on “My Automobile” and the smoothed out Jazze Pha production “Mind on My Money”:

Sean Paul: “I got my mind on my money, my money on my mind
Anything I got I sell it, to get it all the time
A nickle or a dime, a half or a pound
Long as my bitch ride I’ll put a nigga down
I’m a playa from the jump, a hustler from the start
Somethin in your chest, that open up your heart
Got the feddi, like Memphis 10, they get it get it
Gotta have it have it, take it all, man if they let me
I’ma run it, put somethin’ on it, instead of bet it
Scared money, don’t make no money, buddy I’m ready”

Owing to their family connections with OutKast (J-Bo and Andre Benjamin are cousins) you may notice some similarity to their ATLien sound and style, and it’s not surprising Dungeon Family members Backbone and Killer Mike make cameos on “Hustle” and “Lean Low” respectively. It’s all good, except that somewhere in the interim the Bloodz seem to have lost that carefree sense of fun that they had on their very first single “U-Way” or on their highway cruising anthem “85.” It may be that having been shit on by an uncaring industry for four years, the Youngbloodz decided to grow a thick shell and stop caring either. They still have talent, they still have beats, but unfortunately in the process of becoming more hard they became more like every cliched hardcore artist and less like the Youngbloodz that lived up to their name by being the fresh young blood of the new South. “Drankin’ Patnaz” still deserves rotation and has some fresh songs, but perhaps a few cameos from that nutball Andre 3000 himself would have lightened the mood and made the presentation more palateable.