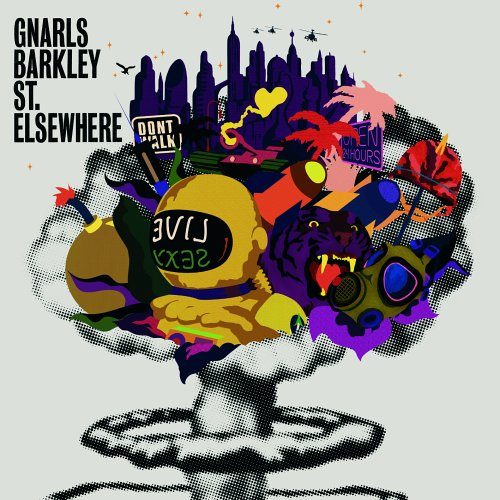 Gnarls Barkley’s “St. Elsewhere” is the first CD I’ve come across that is equipped with a unique watermarking system that allows the tracing of any individual MP3 ripped from a given copy to the individual the promo copy was sent to. While I wasn’t going to mention the watermarking system initially, things happened that made me change my mind. My copy of “St. Elsewhere” worked fine on my stereo system for the first few days, but then on the day I decided to write up the review it decided it didn’t want to play anymore. Despite warnings on the CD that it should not be played on my computer, I decided to try to play it on my computer in the interest of getting a timely review done – still no luck. So in the end I had to find a bootleg copy of the CD in order to put a review together, surely the opposite result that the record label had in mind when equipping their CDs with copy protection. The album itself is an interesting collaboration between southern “rapper turnt sanga” Cee-Lo and increasingly popular producer DangerMouse. Already making a big splash overseas, the duo is hoping the American audience will be equally receptive to their unique brand of alternative hip-hop.

DangerMouse shows another very versatile side to his production style on this release as his beats tend to match the album’s mood and Cee-Lo’s voice perfectly. While the “DangerDoom” album found DM coming up with cartoon-like and quirky beats, “St. Elsewhere” finds DM delving into the dark and serious side more often with mostly successful results. The lead single, “Crazy,” features a very emotional beat driven by strings, both plucked and played, and smooth background vocals. Despite the abundance of emotion in the beat, DM makes sure not to overshadow Cee-Lo and allows his vocals to make up the core of the song. “Gone Daddy Gone” changes the pace considerably as DangerMouse serves up a beat that sounds like an 80’s rock-pop hit. It’s not a bad song, but it ventures too far away from Hip-Hop for this reviewers comfort. “Just A Thought” is a deep and almost scary track due to Cee-Lo’s vocals. The beat also fits perfectly as DangerMouse crafts another emotional track in the vein of “Crazy.” “Just A Thought” also confirms the fact that DM’s beats are best suited for Cee-Lo when the mood is dark and emotional. When things get upbeat or too happy DM’s beats tend to sound like they are fighting Cee-Lo for attention rather than complementing his voice. “Go Go Gadget Gospel,” “Smiley Faces” and “Feng Shui” all find Cee-Lo paired with beats that tend to clog up his voice rather than play the background. The beats themselves aren’t bad, but they don’t match up with Cee-Lo well. The only upbeat track where Cee-Lo sounds at home is the frantic “Transformer.”

Lyrically, Cee-Lo strays even further away from rapping, choosing to stick mostly to singing with mixed results. One of the few tracks where Cee-Lo sticks to rapping is the aforementioned “Transformer,” where he effectively flips a fast-paced flow. As a singer Cee-Lo is his best on slower tracks where he gets dark, a trend that clashes with his previous success on high-energy anthems such as “Closet Freak.” Cee-Lo’s best verses come on “Crazy”:

“I remember when
I remember, I remember when I lost my mind
There was something so pleasant about that phase
Even your emotions had an echo
And so much space
Hmm mmmm
And when you’re out there
Without care
Yeah I was out of touch
But it wasn’t because I didn’t know enough
I just knew too much”

And “Just a Thought”:

“Life is a one-way street, and if you could paint it
I’d draw myself going in the right direction
So I go all the way – like I really really know –
But the truth is I’m only guessin’

Though it’s difficult to fully grasp the impact of his words without the raw emotion he pours out in his voice, the somewhat grim subject matter in the lyrics does give insight on the mood of the album. At other times Cee-Lo effectively conveys a somewhat goofy tale about a monster on “The Boogie Monster” while stumbling through a cheesy pop track on “Gone Daddy Gone.”

“St. Elsewhere” isn’t for your average rap fan, and I’m not sure whether that’s a good thing or a bad thing. On the one hand, people like me, who wished Cee-Lo would return to his Goodie Mob flow, will find this album to be the breaking point. On the other hand, if you happened to enjoy Cee-Lo Green as a singer then this experimental album may be just the thing for you. To be clear, “St. Elsewhere” is not a bad album, it’s just not a rap album or even a soul album. DangerMouse and Cee-Lo have hooked up to put together a strange and unique album that is more rock and pop than anything most rap fans are used to. Enter this experience at your own risk as you’ll either love it or hate it.