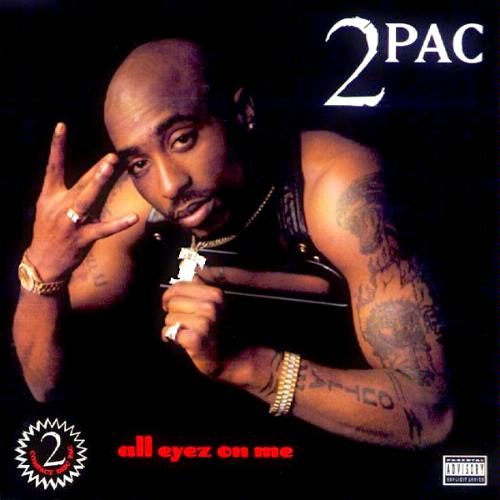 Some would have said it was an unstoppable combination. Tupac Shakur – the actor, artist, poet and INTERNATIONAL THUG EXTRORDINAIRE; and Suge Knight – the ex-street thug who had turned saavy, an intimidating physical presence, and fat reality/gangsta rap records into the million dollar empire called Death Row Records. This was not a match made in heaven though – by some accounts it was a match made in desperation since Knight personally agreed to bankroll Shakur’s bail and get him out of jail. Accounts of how bad this deal was are legendary, and some have even accounted for the large number of posthumous 2Pac records as proof. In their eyes, Shakur was recording as many albums worth of material as quickly as he could in order to fulfill his contractual obligations and break North with haste. We’ll never know for sure because dead men tell no tales, although the urban myth that 2Pac whispers the words “Suge shot me” in the intro to his Makaveli album live on to this day.

Whether Knight was a thug too big for even hip-hop’s best known thug to handle is ultimately a moot point. What’s left is his catalogue of work to judge for better or worse, and 1996’s “All Eyez On Me” contains a lot of both. This double disc was a success by any defintion though; spawning a long list of singles and videos which were certainly ‘Pac at his finest. Party anthems like “California Love” featuring Dr. Dre and “How Do U Want It” with K-Ci and JoJo had everybody from L.A. to N.Y. bouncing in the clubs, “2 of Amerikaz Most Wanted” was an anthemic song for Shakur and Snoop, and even a touching piano-driven dedication to homies who got out of the life called “I Ain’t Mad at Cha” cracked the Billboard charts. The latter video spooked the hell out of many people after his death in September of 1996, because by tragic coincidence he dies in the video and is shown in Heaven as an angel on high.

For those who never purchased or heard this double album, here is the bad news: all of the hit singles from this album are on the FIRST DISC. Every single one. Bad news is about to get worse: the version of “California Love” on the album is a REMIX, not the original version heard constantly on the airwaves even today. The original version is nowhere to be found on either disc, and the remix turns the bouncy funk the old version had into a G-Funk synth somewhere between Dr. Dre’s “Let Me Ride” and Snoop Dogg’s “Gin and Juice.” It’s actually not that bad, but if it’s not what you were expecting, it’s probably going to piss you off.

Unfortunately these aren’t even the biggest problems that “All Eyez On Me” has as an album. Double-disc rap albums are chronically notorious for having too much unlistenable filler material, but this album’s tragedy is that only the hit singles seem to have been carefully thought out and well produced. Songs like the Johnny J produced “What’z Ya Phone #” rush madly ahead with the speed of a train wreck, with results that are equally disastrous. Many of the songs featuring his homies are highly forgettable, including “Tradin War Stories”, “Thug Passion”, “Run Tha Streetz” and a VERY questionable remake of the P-Funk classic “I’d Rather Be With You” called “Ratha Be Ya Nigga” featuring Richie Rich. Speaking of P-Funk, it’s always good to hear from George Clinton, but his cameo is wasted on “Can’t C Me,” an uninspired repeat of “Atomic Dog.” After already beating the bassline to death on a slew of Snoop Doggy Dogg hits, Dr. Dre owes the hip-hop nation AND Clinton an apology for this musical mistake.

Shakur does sum up this album ironically well with a line from this otherwise horrible song: “If this rappin bring me money, then I’m rappin ’til I’m paid.” Some OTHER music review sites have rated this double-album as the high point of Tupac’s career, but I suspect that was mostly based on the series of hits the first disc spun out during the time he was still alive. If you subtract all of the excellent singles out of the equation, and those ARE some of the highlights of Tupac’s career, what you’re left with is a far too long double album that’s as sloppy and full of filler material as a Manwich. If you never bought any Tupac Shakur albums before, don’t start with this one.

2Pac :: All Eyez On Me
6Overall Score
Music6
Lyrics6