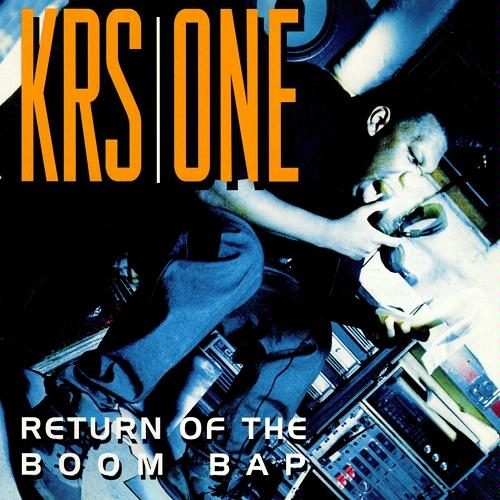 KRS-One :: Return of the Boom Bap

Boogie Down Productions 1992 album “Sex and Violence” was by all accounts an artistic triumph and a commercial disaster. Without question the beats of Kenny Parker, Prince Paul, D-Square and Pal Joey were slamming. Without question KRS-One displayed some of his most hardcore lyrics and flows on songs like “Duck Down” and “Like a Throttle”, and taught lessons like only the t’cha can on “Poisonous Products” and “Who Are the Pimps?” It should have been hailed as a triumph for the hip-hop nation and held up to acclaim worldwide.. but it failed to make a dent on the charts or with the public.

Perhaps the beats were just too hard. Perhaps the Picasso-like cover art was just too disturbing. Perhaps people felt KRS-One was too didactic. KRS-One had his own solution though – come back for delf with a new LP. None of his international fanbase was surprised, since KRS had lyrically been carrying BDP on his since back when Scott LaRock was alive. Really, nobody was checking for another D-Nice album, the vocal stylings of Ms. Melodie, or a fat slammin’ single from Ill Will. It may be harsh, but the truth hurts: KRS-One WAS and IS Boogie Down Productions. As soon as he decided to stop calling himself BDP, BDP effectively ceased to be.

The last dying gasp of BDP as a concept was “Outta Here,” the first single from KRS-One’s “Return of the Boom Bap” album. From the very first moments of this nearly 270 second long song, the thunderous bassline by DJ Premier creates a transcendental bliss impossible to forget and elegant in it’s abject simplicity. Shortly afterward, Primo scratches the line “Boogie Down was performin, hey they ain’t no joke,” the words uttered by fellow New York rap legend Slick Rick. The ultimate triumph is the lyrics; a journey through both hip-hop history from a first person point-of-view:

“Back in the days I knew rap would never die
I used to listen to Awesome 2, on WHBI
I used to hear all kind of rap groups before samplin loops
Rappers wore bell-bottom Lee suits
Me and Kenny couldn’t afford that
So we would go to the park when they was jammin to hear rap
I used to listen ’til the cops broke it up
I always thought to myself — Damn, why they fucked it up?”

Within his story is a warning though: rappers from back in the day who rose to fame and stardom vanished as quickly as they came, or as he says, “They were large, but none of them could managed to stay on top.” And it’s after these words that the potent irony of KRS-One’s first solo album is felt most acutely — in KRS-One’s chorus:

“Do you ever think about when you outta here?
Record deal and video outta here?
Mercedes Benz and Range Rover outta here?
No doubt BDP is old school, but we ain’t goin’ out!”

No one’s arguing with his point here – living large is foolish when you don’t plan for the future, but no matter what rhymes he inserts into that parable he punctuates every chorus in the song with the line, “No doubt BDP is old school, but we ain’t goin’ out!” The sheer sonic dopeness of this song and KRS-One’s rhymes overrides any qualms about the contradiction, but it’s patently obvious that BDP did go out, or else this would be Boogie Down Productions’ “Return of the Boom Bap” album, and not KRS-One’s. From this song’s release onward, BDP existed in name only. As a collective of recording artists, they quietly faded away, and few people even mourned – as long as KRS kept on rapping, nobody really gave a shit.

Given the high quality of this album, that’s not surprising at all. Primo was the guiding force behind this album musically, and makes his presence directly felt on songs like the jazzy “Mortal Thought” and the spiritually funky “Higher Level.” He also co-produces “I Can’t Wake Up” with KRS-One, the B-Side of the first single. For some reason, people interpreted this song as a diatribe against marijuana, instead of a fantastical vision where a rapper falls into a hypnosis-induced dream about being a Phillie Blunt that’s passed around to a who’s who of hip-hop. For those who didn’t get it, Channel Live’s “Spark Mad Izm” would resolve the issue later, but in the meantime heads would be bouncing to the second single “Sound of Da Police” as produced by Showbiz. While Ice-T’s side project Bodycount was getting all the press for “Cop Killer,” KRS-One was licking off some REAL buckshots at the P-I-G:

“Now here’s a likkle truth, ppen up your eyes
While you’re checking out the boom-bap, check the exercise
Take the word “overseer,” like a sample
Repeat it very quickly in a crew for example
Overseer.. Overseer.. Overseer.. Overseer
Officer, Officer, Officer, Officer!
Yeah, officer from overseer
You need a little clarity? Check the similarity!
The overseer rode around the plantation
The officer is off patroling all the nation
The overseer could stop you what you’re doing
The officer will pull you over just when he’s pursuing
The overseer had the right to get ill
And if you fought back, the overseer had the right to kill
The officer has the right to arrest
And if you fight back they put a hole in your chest!
(Woop!) They both ride horses
After 400 years, I’ve _got_ no choices!
The police them have a likkle gun
So when I’m on the streets, I walk around with a bigga one!”

Given the racial tensions of a post L.A. riots America in ’93, it’s amazing this song didn’t spark an Ice-T style backlash; but perhaps people were finally waking up to the fact that all these years of songs like N.W.A.’s “Fuck the Police” and Double XX Posse’s “Headcracker” were getting at something: police brutality isBULLSHIT. Sadly the lessons of Rodney King taught us nothing, because years later we went through it all over again with Abner Louima. Personally I wish KRS-One had written a sequel with the hook, “WOOP WOOP! I stick de plunger up your ass, WOOP WOOP! I’m a pig wit no class” but sadly it’s the people who need to hear these songs the MOST that never will.

Surprisingly the self-produced KRS-One songs were some of this album’s dopest tracks. The pulsing bass of the title track, the minimalist beatboxing of “Uh Oh” and the simple but effective loop of “Black Cop” (previously released with little fanfare on the “CB4” soundtrack) all hit the mark. KRS-One’s beats on most projects since 1993 have walked the line between marginally dope or just plain mediocre, which is why again on this album I credit DJ Premier with being a behind the scenes influence. In the album’s credits he gets top billing on the list of contributors and is the only one not denoted by a * or + next to a song’s title; in other words, when no extra credit is given the production credits default to him automatically. It’s too bad Primo hasn’t reunited with KRS-One on this level since, saved for some small change on KRS-One’s self-titled follow-up and sporadic projects since.

Whether you can argue that KRS-One is doper with or without Kenny Parker, his brother isn’t missed here at all. With all of the other producers who have been namechecked to this point Kid Capri hasn’t even come up yet, and he laces the excellent songs “Brown Skin Woman” and “Stop Frontin'”; while even providing a few surprisingly nice raps on the latter:

“You wanna step to Kid Capri, COME COME COME!!
I break em up, just for actin like a superstar
Around the way, we got a neighborhood trooper car
We ride by, and spray your crew, and your honies too
And rip you open and drink your blood like a Mountain Dew”

Damn Kid, take it easy on ’em! On the whole, there’s realll only two things on this album to complain about: the classic “Hip Hop v. Rap” B-Side of the second single wasn’t included, and fifty-six minutes of bangin’ rap songs just isn’t enough. This is KRS-One at the zenith of his prose, power and popularity, and it shows on all levels – which makes ending the album with “Higher Level” perfectly appropriate. When people talk about why KRS-One still gets mad respect despite an endless list of contradictory stances and overly didactic material in the last decade, albums like this one are why. Love him or hate him, you can’t deny that he’s one of the all-time greats – and his first (but certainly not last) solo album is proof why.