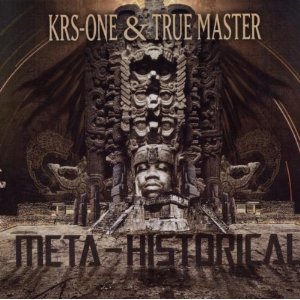 True Master and the Blastmaster? After the historic meeting with Marley Marl and the acclaimed alliance with Buckshot, the potential for surprise is somewhat exhausted when it comes to KRS collabos, but the prospect of a cultural exchange between Staten Island’s Shaolin temple and the Temple of Hip Hop is interesting nonetheless.

Sadly the album confirms the common fears about such a constellation. There was a time when True Master was competing with 4th Disciple to be the heir to RZA’s throne. He turned in Wu bangers like ODB’s “Brooklyn Zoo,” the Clan’s “Heaterz,” Ghost’s “Fish,” Priest’s “One Step,” Cappa’s “Slang Editorial,” Bobby Digital’s “La Rhumba,” Meth’s “Sweet Love,” or Deck’s “REC Room.” There was also a time when KRS-One’s lyrics left impressions that last to this day, for instance when Big Boi says on this year’s “The Train Pt. 2 (Sir Lucious Left Foot Saves the Day)”: “I spray what’s on my brain to EDUcate and enterTAIN / KRS, he said it best, I learned from listenin’ to these tapes.”

“Meta-Historical” makes those days seem really far away. It very rarely goes beyond a mixture of big words and simple rhyming set to undeveloped beats. “Murda Ya'” sounds like a reject from Channel Live’s “Station Identification” sessions and sees Kris revisiting his ragga stylings while striking the same peace-sign-with-one-hand, trigger-finger-with-the-other pose for the umpteenth time (“I know my roots and culture but I’ll – murda ya” etc.). “Gimme Da 90’s” is such a poor representation of the decade it can only be counterproductive, with or without its revisionist rhymes (“When rap was a hobby and you did it for the art” etc.) and dull rehash of the “Hip Hop Vs Rap” routine. “Knowledge Reigns Supreme” suffers from a bleepy, pseudo-mythical backing even third-tier Killa Beez would refuse to rap to. On “One of Them Days” KRS seeks melodic inspiration from R&B singer Monica’s ’95 menstruation manifesto “Don’t Take it Personal (Just One of Dem Days),” but thankfully True Master’s rambunctious beat takes the lead. “Palm and Fist” ruins a potentially monumental production and content worth considering with an insufficient mixdown and unprofessional female vocal support. “Old School Hip Hop” has a female hook as well but “Step Into a World” it ain’t.

At this point (track 12) you have either tuned out or continue to pay attention because you still reckon the veteran capable of dropping a gem or two, at least of the lyrical variety. Well you can skip “1-2, Here’s What We Gone Do,” a lackluster duet with RZA that has haphazard improvisation written all over it.

What might arouse some interest is that here and there the grandiosely titled “Meta-Historical” makes advances to the world of science. Quantum physics for instance is a more recent reference point in KRS-One’s ever evolving field of interest. There’d be nothing noteworthy about “Street Rhymer” (certainly not that it features Cappadonna) except that the rhyming sequence constantly deteriorates after the promising opening lines. But the song throws the term ‘superposition’ around, KRS at one point dropping a lyric that seems to link it to the meaning in quantum physics according to which a particle potentially inhibits all states for which there is a possibility: “I’m a street rhymer in superposition / there’s like 10 of me, and all of ’em dissin’ / in the past, present, and future position.” While the metaphor might not be a hundred percent congruent with the idea of superposition in quantum physics, it quite nicely sums up the rapper’s persistence and resulting ubiquity.

“Unified Field” explains the basic relationship between atoms and molecules to somehow conclude that “we goin’ through levels of string theory.” It also contains short quotes by a certain Dr Oyibo. Online research on him proves inconclusive, as does the one for ‘meta-historical,’ although interestingly, a cached version of the Wikipedia page for Metahistory states, ‘The term Meta-History was defined by the black philosopher Dr William F Fearon.’ He also appears in the Wiki entry to ‘Meta-Historical,’ under which we find this very album, plus the statement: ‘The title and album are dedicated to the achievements of the Dr William F Fearon, a legendary black philosopher, doctor of medicine, and the creator of Virtual Reality. Dr Fearon coined the term, Meta-historic, and defined the meaning of Emotional Intelligence.’

Now… the obvious leap to conclusion if you were brought up by the KRS school of thinking would be that the reason someone like Mr Fearon remains a mystery figure at least on the worldwide web is because the achievements of African and African-American men and women historically have been systematically negated in our western civilization. But if it was the rapper’s intent to shine light on the findings of a slighted scholar, he clearly failed. He also failed in case such a person is just a fancy of someone unrelated to “Meta-Historical” providing bizarre internet content. Simply because if it is still KRS-One’s intent to teach through his music, he needs to do so in a much more cohesive and condensed manner, with or without pompous terminology.

On albums like “Meta-Historical,” the interesting bits and pieces are distributed so randomly (see “He’s Us” with noteworthy lyrical input from True Master) that they feel more like a brainstorming session than anything else. Occasionally the concentration is held, such as on the title track, which fascinates with observations about history:

It goes without saying that the person we know as KRS-One possesses an extraordinary intellect. He makes you wish that more rappers could speak with the same conviction. But a speaker’s own conviction doesn’t necessarily and always convince his listeners. Communication is a complex matter, and while KRS once had mastered it in the medium of rap, his message nowadays is often convoluted beyond comprehension. Those who are genuinely interested in what the man has to say today are probably better off reading his books or attending his shows because “Meta-Historical” ranks deep in the lower half of his discography.