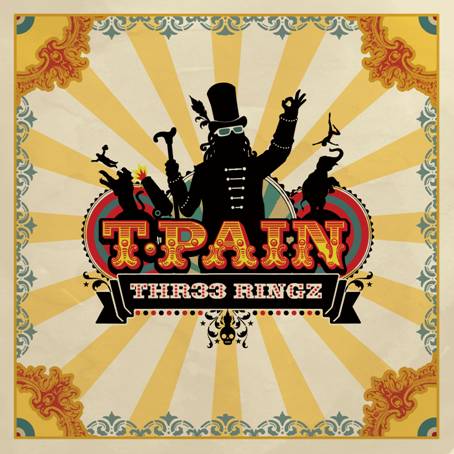 The third album from T-Pain, “Thr33 Ringz,” finds him once again attempting to master the triple threats – rapping, singing and producing. That it turns out to be incredibly formulaic and slavishly apes his sophomore effort (“Epiphany”) proves only to be a minor deterrent, since almost everything here is upscaled. He really is one of the true ringleaders of the game, and whilst Akon featuring on his last album was pretty much the height of it, Pain has had a BIG year guesting on international mega-hits like “Low,” Chris Brown’s “Kiss Kiss” and Kanye’s “Good Life.” That’s not even mentioning Lil Wayne’s single “Got Money” – a song so devoid of redeeming features that I actually cheered at the end of the video when the police caught him. This should be a massive third album for T-Pain, but it probably won’t be quite as big as it could have been – for exactly the same reasons as last time round.

The guestlist has certainly been boosted – Lil Wayne, Kanye West, Chris Brown, T.I., Ciara, Akon and Ludacris are nothing to shake a stick at – and the production is definitely better than last time round. His beats are consistent throughout, and mix a variety of different styles whilst still managing to sound uniform within the album – no mean feat for Pain, who produces the ENTIRE album. Think lots of LKTRO funk, “Hard & B,” Miami Beat and (surprisingly) a few Dr. Dre types of numbers. All in all, as background music it works perfectly, and as a genre-hopping exercise, it is a near-faultless epic. As far as subject matter goes, no prizes for guessing how the pie-chart is divided: stripper anthems, sex, dancing, “getting money” (YAWN), being popular, being hated, plus chuck in a “social” track at the end. Yes, dear Reader, it truly is genre-by-numbers, so try not to expect too much.

There are two other aspects to the whole show that deserve a mention: his sense of humour and the associated levels of creativity. The former seems hit and miss – the skits are pointless and unfunny, whilst he does manage to raise a couple of smiles on the Ludacris-featuring “Chopped & Skrewed” and “Therapy,” with guest K.West doing well. I mention this because I find T-Pain to be hilarious in interviews, like when he playfully lambasted Chris Brown for “being, like, twelve years old or whatever,” thus forcing him to change the lyrics to “Kiss Kiss.” But his humour on wax rarely hits the mark, with songs like “Superstar Lady” falling flat. As far as his creativity goes, there are definite bonus marks for the Ringleader. His whole marketing push has been spot-on: his tailored circus wardrobe, an awesome ringleader hat (that I simply have to have), arriving on a fricking elephant to the MTV awards, plus some incredibly creative videos. If you haven’t watched the psychedelic “Chopped & Skrewed” video (which trumps the similar “Can’t Believe It”), check it out pronto, as well as the bizarre “Karaoke” mini-movie (props to Akon on the drums!).

Being a producer and an artist is a difficult tightrope to tread. Whilst Kanye West might have wrongly claimed to “save all the best beats for himself,” he certainly saved ENOUGH to guarantee that he would blow up into an international superstar (imagine “Gold Digger” having reached its’ original destination of Shawnna!). Unfortunately, the same cannot be said of the sinfully selfless T-Pain. I made this point in my “Epiphany” review, but again there isn’t a song on here that matches a track like “Low.” In fact, there isn’t a single track on here that I can see becoming a global hit. “Freeze” is nice enough, “Blowing Up” is an excellent album track and “Can’t Believe It” is a simple but effective number – yet none of these will really help T-Pain go huge. Which is insane because he is massively popular. It just feels like he continually saves his most memorable moments for the highest bidder, not realising that THIS is his time to strike. After “Thr33 Ringz,” I can imagine him being pigeonholed as an artist/producer that makes solid but unspectacular solo albums, whilst becoming better known for his guest appearances.

Of course, time is still on Teddy’s side, since he’s, like, fifteen or whatever. But he needs to learn how to be more selfish, and save some major hits for himself – make no mistake, his first two albums sold approximately a quarter of Akon’s first couple of LP’s. Though it will sell handsomely enough, I can’t imagine that “Thr33 Ringz” is going to go double platinum, and it is a shame, since his rapping has improved (a bit), his natural un-AutoMolested singing voice is actually rather good (witness “Keep Going”), and his production is getting tighter by the day. T-Pain is getting better, but his judgment still sucks. He might be the Ringleader, but who remembers the Circus Master after the show is over? You remember the normally docile tiger attacking the tamer; the limber couple flying through the air, entangled in a supple embrace; the woman with more chest hair than you. There aren’t enough chest hair moments and I couldn’t hear any screaming dismembered tamers.