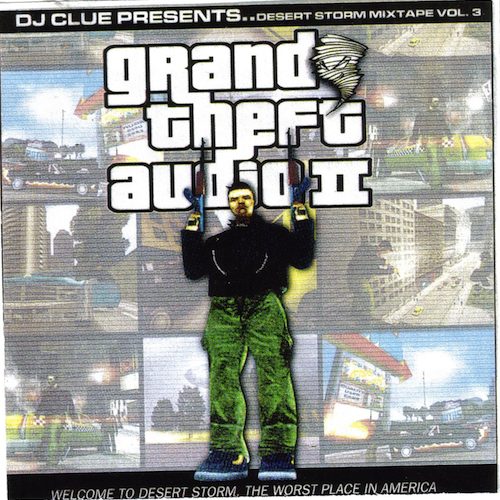 We’ve never officially reviewed any mixtapes before today at RapReviews.com, since literally hundreds of them are put out every year. This one, like most others, is not available in stores, and that’s another factor that has deterred us from reviewing them before now. A lot of y’all out there have access to this type of shit though, and we’re just trying to make your lives easier when it comes to tracking down good solid hip-hop. So as always, if you like what you see (or if you don’t) with this or any other review let us know, because we want to hear from you. With that out of the way, on to the review!

First things first, man; I gotta give DJ Clue his propers on the cover for his latest mixtape (or in this case, CD). As the name might indicate, he’s taken images from the PS2 game, Grand Theft Auto III, and Photoshopped the “Auto” so it reads “Audio” instead. Genius. Why the hell he didn’t name the tape Grand Theft Audio III instead of II, I’ll never know, but this blatant disregard for copyright laws looks great as an album cover, and is a nice little gimmick for the record as well.

From the cover to the opening track, Clue’s keeping the theme alive by using an audio sample from the game as the tape’s intro. (Okay yes, I know the game pretty well, but I still wish it would come out for the X-Box.) This Mafia style introduction and inspired cover art leads us to think that we might actually have an example of the all-too-rare “concept album” with the GTA2 mixtape, but such is not the case. Instead, what we have here is an above-average collection of tunes by the usual Clue suspects that should definitely keep your headphones happy, at least for a little while.

Jumping things off we’ve got the LOX featuring Jaehood doing the “D-BLOK Party Freestyle”. I gotta say though, that if this truly is a freestyle, I have new respect for the LOX. I mean, none of them are ever GREAT MCs in the first place (no, not even Jada), but this track doesn’t sound any worse than their scripted/album shit. It goes without saying that no one on this track, or for that matter anywhere on the rest of the tape, is breaking any new ground lyrically. This entire tape is STRICTLY party shit. It’s all guns, dough, hoes, and hydro. Throw in maybe some ice, some liquor, and of course some serious braggadocio, and you’ve got the whole package right there. Everyone’s saying the same shit on GTA2, just phrasing it differently. But speaking of the LOX track, they definitely do turn it out with a tight Mediterranean beat reminiscent of R. Kelly’s “Fiesta” remix.

After that Mobb Deep’s members each get their turn to shine solo on back to back twin tracks “Shootout” (Prodigy) and “Bump That” (Havoc), each about a minute long. As always, Prodigy’s “doin’ what he’s s’posed to do”, but Havoc’s blessed with a much stronger beat here, so I’m feelin the latter track more. Regardless, neither of these really match up to most of the material on “Infamy”, but keep things moving nonetheless.

Next up Cam’ron teaches us two simple lessons on “Show You How 2 Do This Part 2.” A) He confirms everyone’s suspicions that he is a VERY weak MC (Not only is his flow lackadaisical as FUCK, but he rhymes “world” with “girl” and then uses “girl” twice more after that.), and B) His signing with Roc-A-Fella is nothing short of a miracle for his career. With a signature blazing Roc-A-Beat and Jigga-Man himself backing Killa Cam on the hook, shit sounds nice regardless.

Speaking of Jigga-Man, he contributes with Scarface and Beanie Sigel for “Guess Who’s Back”, which SHOULD have been on one of their albums. This here is a strong track. Heavy bass, ethereal piano, and barely-there strings, plus Beans, Scarface, and Jay-Z? Did I really need to tell you that was dope??? I’m still singing the hook: “Guess who’s bizzackâ€¦” Mm-mm good.

The only track better than that is Freeway and Young Chris doing “Line â€˜Em Up”. Shit, I’ll be goddamned if Freeway isn’t a superstar in the making. As far as the Roc-A-Fella camp goes, Freeway beats Memph Bleek and Cam’Ron hands down, and he might even give Beanie a run for his money. I know Jay-Z is smart enough to hang onto this kid. “Line â€˜Em Up” boasts a fairly traditional hard-rock/rap beat in the spirit of MOP, but Freeway just tears it up. He sounds like no one else, and I’m excited to see what he does with his career in the future. Even Young Chris, who at the best of times sounds like an awful Jay-Z impersonator, can’t kill the momentum on this track. Lovin’ it.

Other standouts on GTA2 include Geda K.’s freestyle, not because of Geda’s rhymes, but because of the CRAZY scratching-and-drums beat that samples Ad-Rock saying “Chilly Chill”. That’s the type of shit that’ll stick in your head for a minute, and there’s nothing you can do about it. Then you got “Automatic” by E-40 and (shudder) Fabolous. Rest assured, Fabolous does come VERY close to fucking up instant E-40 gold, in which E goes funkadelic over an Inspector Gadget beat. I love E-40 in small doses, and if you do to, this’ll do the trick, that is, if you can look past F-A, B-O’s “contributions”. Oh by the way, Fab also chips in on GTA2 with “Just Don’t Stop”, but yall don’t need to hear me rag on Fabolous. You either love him or hate him, and as for meâ€¦ no comment. I’m also feelin’ the “Welcome to Atlanta” remix. Even with the inexplicable removal of Luda’s verse from the track, JD’s stays in tact, Puffy is tolerable on the track, Snoop does his best Long Beach stereotyping verse, and Murphy Lee from the St. Lunatics knocks his verse out of the yard. We need to see a Murphy Lee album REAL soon.

Elsewhere, Grand Theft Audio II offers two tracks from the Flipmode Squad: “You Know the Rules” and “Get Low Freestyle”. Now, Flipmode is still the SQUAD!!!, but damn I miss Lord Have Mercy. It just ain’t the same without him. Although who besides Busta Rhymes do you know that could pull off a line like “Copy n*gga’s shit down at Kinko, n*gga” without sounding wack as hell?

You’ve also got appearances by Lil’ Kim, Foxy Brown, AZ and Nas with a snippet from AZ’s forthcoming album, Ms. Jade and Bubba Sparxxx with Timmy on production, 50 Cent, Joe Buddens, Team Arliss, and the Eastsidaz.

There are drawbacks to GTA2 though (I mean, besides Fabolous’ TWO appearances). Namely, there’s still WAY too much of Clue hollering things. He’s cut down a bit on shouting his own name, but if I hear “fresh out!” one more time I’ll explode. Also, the length of the tape could probably have been cut down substantially – the shit’s nearly 75 minutes long! Bottom line is, if you can get your hands on a copy of “Grand Theft Audio II” I highly suggest you do just that. I liked it better than either of Clue’s official albums, and while it certainly isn’t a classic or anything, its good tracks make me happy that I’ll have it to bump this summer. Only the most underground-loving heads should steer clear of this one, because admittedly, it is commercial as hell. Still, it’ll probably be caught in my CD-changer for the next couple of weeks. Good stuff.