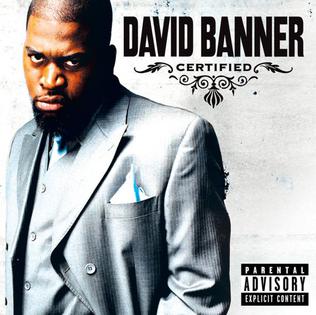 It’s been a long road traveled since David Banner first hit the mainstream as a member of Crooked Lettaz. He hit the independent route for a few years after Tommy Boy folded and garnered nationwide attention again when “Dem Firewater Boyz Vol. 1” sold significant numbers in the south. This lead to a head-turning multi-million dollar deal with Universal Records and the critically acclaimed “Mississippi: The Album” and “MTA2: Baptized in Dirty Water.” While critics were definitely giving Banner his due, the buying public gave him only a lukewarm reception. The sad truth is that people aren’t ready to face the demons Banner fights every day. Even Kanye’s outspokenness looks safe compared to Banner’s in-your-face assault against racism and inequality. Sensing that his message was going mostly unheard by the masses, Banner has made himself more accessible on “Certified.” Most people have already heard the “Wait”-inspired “Play” which has quickly become Banner’s biggest hit to date. “Play,” along with a few other more radio friendly tracks, is sure to make “Certified” Banner’s biggest album to date. Thankfully, Banner takes advantage of his larger fan-base by including plenty of the meaningful rap we’ve come to expect and ensuring his uplifting message reaches further this time around.

The album starts off with the equivalent of a slug to the chest, as Banner comes as hard as ever on remorseful yet unapologetic “Lost Souls.” Over a rock influenced beat Banner bares his soul:

“This if for my thug niggas
All the pimps and the drug dealers
Thieves and the motherfucking killas
The ones who ain’t never had shit
That’s why we get crunk in this bitch
[…]
Daddy in the pen, momma out sucking dick
I ain’t never had fam so I ride with my click
Shit I die for my click, jealous hoes die too
I woulda been a lawyer by the age of twenty-two
But I won’t, so I don’t give a fuck about killing dude
I sell crack too, I will jack dude
I dropped out of school to buy my daughter some food
And her momma don’t live around here no more
They took her life when they kicked in my door
Yelling “Bitch, where da dope at?” â€“ Blau!, Blau!, Blau!
They thought I was beast? â€“ Tell the bitch look now
I’ma smoke my weed, I’ma fuck me a hoe
I’ma want your dope, I’ma kick your door
I’ma slap your hoe, I’ma take your yay
When I’m thinkin’ bout the Lord I gotta see one day â€“ I’m sorry, damn!”

Banner doesn’t stop there, as the album includes other meaningful tracks. “My Life” could easily serve as the sequel to “Cadillacs on 22’s” as Banner carries on the theme of trying to do right despite adversity and risks. “Ridin'” is any rap fan’s dream as Banner is joined by Talib Kweli and dead prez for a rousing political anthem. Banner reunites with Kamikaze on “X-ed” for one of the album’s best track. The beat’s frantic drums and synths provide plenty of energy, but it’s Banner and Kamikaze who steal the show with a surprisingly crunk tale about alienation in the ghetto. “Crossroads” might be the album’s most emotional track as Banner addresses a frequent theme in hip-hop with his own twist. Though the track isn’t billed as a rap/rock track, Grout’s electric guitar riffs and alt-styled singing and Banner’s raspy rap combine to make a track that would make Linkin’ Park envious.

For those fans wondering if Banner kept it crunk, you’ll be sure to find plenty of the “fuck you” attitude and pounding bass that earned Banner his hood stripes. The unofficial lead single, “Ain’t Got Nothing,” is as humorous as it is grimey as Banner declares:

“Let me hold somethin Banner – look you can’t hold shit
Nigga buy your own drink, stop beggin like a bitch
Get some motherfuckin nuts, be a motherfuckin man
Y’all them same niggaz laughin when I step off in that van
Bootlegger cocksuckers in my face, you a fan ho
Get up off my nuts and start your own fuckin band ho
Grab some fuckin drum sticks, get off of a nigga dick
Even if you had a pussy bitch I wouldn’t splurge trick
Man I’m comin down hard, pullin pussy niggaz cards
If you don’t like it KNUCKLE UP and take it to the yard
Dead but you won’t get a cent from me
But you can get a good ass kickin for free, punk bitch!”

The track’s honest take on being broke is only made better by Banner’s ill horn arrangement. Lil’ Jon shows up for “Treat Me Like,” which also features a solid contribution from Jadakiss. “Gangsta Walk” is an ode to Memphis’ infamous dance and features both the Three Six Mafia and 8Ball and MJG. “On Everything” features some of the illest marching-band inspired production to ever hit a rap album. If the drums themselves weren’t enough, Twista shows up with his rapid-fire flow that ironically happens to be quicker than any snare roll. The album’s title track is signature Banner as the beat blends synths, guitars, and drums for an anthem that is subdued and crunk at the same time. The album changes pace big time as Banner pays tribute to the self-professed “best coast” with the Maestro produced “Westside.” Rather than come off as a cheesy imitation, Maestro’s production sounds as West Coast as anything put out by the good doctor. Banner shouts out all West Coast pioneers and even shines some light on emcees currently hustling in the Bay, including an appropriate nationwide R.I.P. to Mac Dre. “Bloody War” features everybody’s favorite Hot Boy, as B.G. shows up for a solid contribution. The song’s gangsta theme probably makes it the most generic track on the album, but the creeping synth production makes it the crÃ¨me de la crÃ¨me of the genre. If that wasn’t enough, Too Short, Bun B, and Jazze Pha lend their vocals for the funky, pimped out “Take Your.”

So far, all the tracks discussed contain the same spirit that made Banner who he is today. What makes “Certified” different from his previous work are the more commercial tracks that were absent before. “Play” features crazy production from Mr. Collipark and capitalizes on the success of the Ying Yang Twin’s “Wait.” Though some may find it impossible, “Play” is actually a lot more graphic than the nastiest line in “Wait.” Mr. Collipark’s beat makes even the most uptight college girl overlook that fact. Other more radio-friendly tracks include “2 Fingers” and “Thinking of You.” Jagged Edge provides the hook for “2 Fingers” and Banner comes through with smooth production for what is sure to be another Banner club banger. Case shows up for “Thinking Of You” as Banner reflects on a love past. It’s not the typical Banner track but it will surely help him sell more units. Jazze Pha mans the boards for smooth as silk “Fucking.” The track’s title and topic matter don’t automatically lend themselves to radio play, but one listen will bring back memories of Biggie’s “Fuckin’ You Tonight” and open up the potential for commercial success.

“Certified” is definitely Banner’s best album to date. While probably not explicitly, Banner seems to have taken the advice of Wu-Tang Financial and diversified his bonds plenty this time around. He stays true to his roots with his usual mix of Southern crunk music and heart-felt reflections of growing up Black in the south. He also manages to include more radio-friendly tracks that are sure to get him a wider fan base, but without selling out or sounding too pop. “Certified” treads a fine line between keeping it real and selling units, but Banner treads that line very well. Though it is his best album to date, hopefully this is only the beginning for the game’s most conscious rapper.