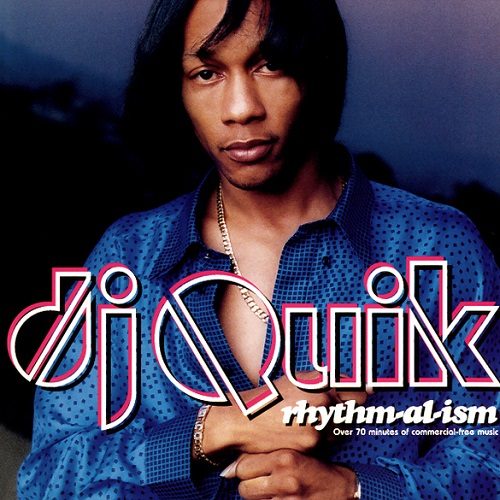 This statement uttered by Quik himself could describe so many aspects of his career.

Getting the props you deserve – “Quiker Said Than Done.”

The man can’t even catch a break when it comes to putting together a crew as his protégé Mausberg was tragically gunned down back in 2000 and there is rumored beef between Quik and Amir, a rapper he was trying to help put on. Though all these problems would be frustrating for anyone, throughout the years Quik has shown that the things in his career he can control, such as the making of good music, do get done and get done well.

Released in 1998, “Rhythm-al-ism” may have been the closest Quik ever got to making a commercial splash. “You’z a Gangsta” and “Hand in Hand” were catchy singles that made it onto radio waves across the country and less radio friendly tracks such as “Medley For A V” were bumping out of car stereos. The album itself was nothing new for Quik, filled with funky beats that only Quik can make and his smooth flow, “Rhythm-al-ism” was the quintessential West Coast Party.

“Rhythm-al-ism” intro starts things out with hard guitar riffs reminiscent of the those sampled by Kanye West on Jay-Z’s “Takeover” and Quik explaining just what ‘Rhythmalism’ is all about. “We Still Party” is self-explanatory and features a signature head-nodding and body-moving beat by Quik. “So Many Wayz” has a laid back beat with a slithering bass line and a smooth hook. “Hand in Hand” features 2nd II None and is an anthem to money and women, expressing the concept of M.O.B. like only Quik could:

“Down Down Down” is another anthem celebrating the celebrity lifestyle. “You’z a Gangsta” is possibly the best track on the album and a personal favorite. Not only is the one of Quik’s funkiest, but the topic is one that isn’t addressed in Hip-Hop enough:

“See some don’t realize the power of lyrics
’cause when you rap about death you talkin’ to spirits
You see you can say the things that can help us all ball
or you can say things that make it bad for us all
fix the problem the only way is come to the source
don’t be a Trojan Horse help us change the course
everybody knows that it’s bad in the ‘hood
so check what you rappin’ about if it ain’t to the good
I did my part a long time ago I changed my views
ain’t no gang bangin’ and slangin’ just hangin’ with trues
give it up to my Creator and that you can quote
but mothafuckas still see me as a scapegoat
yeah like that night when Biggie died at Quincy Jones spot
like 400 other people yeah I heard some shots
broke away with the crowd nervous obviously
and the mothafuckas blamed it on me
What the hell!?!”

Dedicating the track to ‘Pac and Biggie, smashing the beef with MC Eiht, and proudly claiming “No I’m Not” when being called a gangster, Quik does more in one song to increase the peace than most rappers do in a career.

Though its hard to point out standout tracks on overall great albums, Quik comes correct even more than usual on “Whatever U Do” and “Medley For a V” with production that would have sounded at home back in the era of funk and soul. Nate Dogg and Snoop particularly tear up the track on “Medley For a V” with their usual pimpish tales. Maybe it’s the DJ Quik fanatic inside of me getting the best of me, but there isn’t one bad track on the album – Quik continues to be “Way 2 Fonky” track after track.

With all the compliments thrown Quik’s way so far you can deduce that the man is talented and makes good music. Throughout the years Quik has crafted a style of music that, while taking elements from Funk, Soul, and other genres, is all his own. “Rhythm-al-ism” exhibits all the characteristics that make Quik the underground star he is. It’s a recommended addition to anybody’s collection and a testament to the fact that though outshined by its East Coast counterparts at times, the West Coast keeps partying as strong as ever.