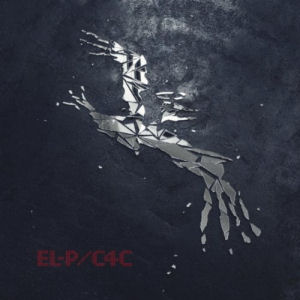 An El-P album is an event. He’s only released three vocal albums in the past ten years, and each one has been a must-own, at least for fans of underground hip-hop. His albums are carefully constructed, full of complicated rhymes, themes, and beats. He does all his own production (only fitting for a man originally known as El-Producto), collaborating with a team of musicians to create music that falls somewhere between hip-hop, rock, and noise. Each of his two previous albums set such a high standard that when he announced his latest release, fans had to wonder if he could keep up his winning streak. From the first listen of “Cancer 4 Cure,” the answer is clear: of course he can.

” his fighting record, and the man’s got a lot to be angry about. The economy is STILL in the toilet, being voted out of office somehow made the right wing come back angrier and stronger than ever, we’re still fighting two endless wars that we refuse to talk about or pay for, and, oh yeah, El-P lost his label AND his best friend. While the death of Camu Tao hangs over the album, the demise of Definitive Jux seems to have given El-P the gift of freedom. He no longer has to worry about negotiating with artists, vendors, distributors, and retailers. He’s not bogged down in the day-to-day business of running a label, and is no longer on the front lines of the disintegrating record industry. Instead he’s free to do what he does best: make amazing beats and spit intricate rhymes. He’s already done some of his best production work in years on Killer Mike’s “R.A.P. Music,” so evidently losing his label hasn’t kept him down.

Let me put this out there: El-P isn’t the most technically proficient rapper. His stentorian flow is reminiscent of Chuck D, but his delivery lacks finesse or swagger. It’s not that he’s bad, but he’s not the greatest rapper ever. When Danny Brown and Killer Mike show up they outshine El-P, despite the fact that both of their verses are tossed-off. However, what El-P lacks in style he more than makes up for by being one of the best lyricists and storytellers in hip-hop. The man should be writing novels and poetry. His gifts almost seem wasted in rap format, especially since he only dribbles out 13 tracks every five years. The operative word here is almost, because the combination of El-P’s lyrics and beats is almost always gold.

Case in point: “The Full Retard.” The track samples Camu Tao’s “When You’re Going Down,” with the late rapper urging the listener to “pump this shit like they do in the future.” And future is exactly the word to describe El-P’s production. Ominous synths, clattering noise, and sci-fi samples are his bread and butter. His beats are like art made out of garbage. He takes a bunch of cast-off, disparate elements and molds them into some other level shit. Any idiot with a computer can make noisy beats, though. What makes an El-P beat an El-P beat is his deep knowledge of and respect for hip-hop. His beats are BEATS, grounded in banging drums and often referencing the golden age of 80s New York rap, when being noisy was a good thing. There is a little more bang in this album than on “I’ll Sleep When You’re Dead.” That album had its share of slow and experimental tracks. For the most part, “Cancer 4 Cure” moves relentlessly forward, barely stopping to take a breath.

El-P is a master at one-liners and clever wordplay. “Don’t you know this is a rotten time to not not be me?” he asks on “Works Every Time.” “I’ve got memories to lose, man, I am in a rush.” On the sort-of love song “The Jig Is Up,” he tells a potential suitor “Men like me don’t ever get no second chance/Not for the kind of man who showed up at death’s door and ding dong dashed so much he wore out a hole in the welcome mat.” His lyrics are full of references and double meanings, so much so that you’ll still be unpacking them even after hundreds of listens. He’s sort of like hip-hop’s version of William Faulkner, whose novels are so dense you need the Cliff’s Notes just to understand what the hell is going on. Five years after “I’ll Sleep When You’re Dead” came out I’m still discovering new things in those songs, and “Cancer 4 Cure” will demand an equal amount of attention.

A lot of this album deals with dark subject matter. The single “Drones Over Brooklyn” imagines New York under siege. “For My Upstairs Neighbor (Mums the Word)” seems at first to be about the insensitivity of New York life, as a man is questioned by the police about an incident at his neighbor’s apartment:

“You all know what I know and that’s heaping pile of donut holes
I didn’t even know them
I am not your perfect witness
Your team of fat blue buddies waddling around and trying to crack the case
Are better off locating someone else
I spent the day on my New York shit
Didn’t even meet them once
And no I’m not upset, I’m just another guy minding his business
[…]
Come on, you know the drill
These walls are thick
I got my own shit that I’m dealing with
I haven’t seen or heard a thing
I never met ’em
That’s the city
Good luck working it, Columbo
I’ma bounce
You got my info but you’ll never get my pity and I’m out”

It’s only later in the song that you realize that what is really happening is that the neighbor has been beating his wife, and the narrator is giving the wife permission to kill her abuser, telling her “If you kill him, I won’t tell.” This is a return to subject matter he first delved into on Company Flow’s “Last Good Sleep,” in which he described pretending to sleep while his stepfather beat his mother.

“Tougher Colder Killer” describes a soldier interrogating an enemy, delving into the horrors of the wars we are fighting, and the psychological and physical damage they are inflicting on everyone involved.

“To the mother of my enemy I just killed
Your son, he died with his face to the sky and
It can not be undone
He didn’t die hard
In the end he just grinned and bowed
Made him dig his own grave at the point of a gun while he laughed to the gods out loud
And it made me wanna jump out a window
And it made me wanna scream
Tear my face off
Run through the streets
[…]
I wanted you to know that since then I don’t sleep
And the uniform tags sidearm ID that I wore when I did it got sent C.O.D to the HQ
Note reading ‘This is not me and I hate you
For making me make a man bleed.'”

I grew up with several Vietnam vets who bore the scars from that war decades after it ended, and I can only imagine that our current wars are causing just as many scars on the young people who are fighting them. “Tougher Colder Killer” addresses the deeper, longer term effects of war on its combatants.

This being an El-P album, there are the inevitable songs about dysfunctional relationships, or more accurately, how he doesn’t understand why women like him when he thinks he is such a mess. “The Jig Is Up” overcomes its emo self-loathing with a banging beat. “Sign Here” is either an interrogation or a sado-masochistic relationship. Either way it is creepy as hell. The album ends with the eight-minute long “$4 Vic/Nothing But You + Me (FTL).” The production is muddy and dirge-like, until the outro kicks in at the 6 minute mark sampling what sounds like the intro to “Kid Icarus.” El-P sheds his hard exterior, rapping:

“Cancer 4 Cure” can get headache-inducing at times. Some of the noisy beats are noisier than others, and it can be an awful lot of vitriol to take in one sitting. Still, it is prime El-P, deep, heavy, funny, and banging all at the same time. The picture El-P paints with “Cancer 4 Cure” isn’t always a pretty one, but it is always well-executed and uniquely his own.