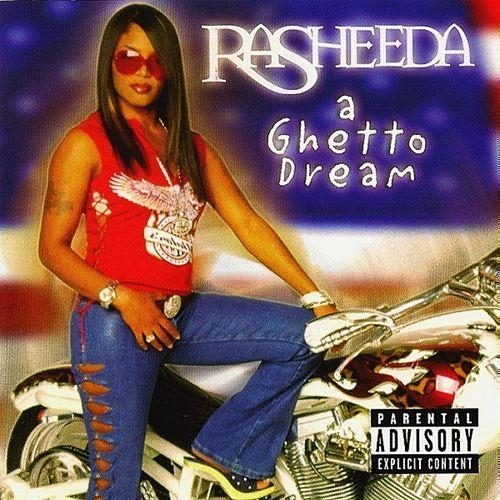 To be honest with you, there are occasions where I want to or have to review a record I know I’m not qualified for. Not necessarily this one here, this is the third longplayer I hear by this lady, but still I lack a lot of background information I might need to give this record a fair chance. I have never even remotely been to where Rasheeda is from, I have never seen her perform live, heard one of her songs played on the radio or at a club – and there are hundreds if not thousands of records like hers I have not heard and will probably never get to hear.

The name of this website, RapReviews.com, is almost too general in today’s diversified market. Yet its staff tries to stay true to it and review a broad range of hip-hop albums. But the other day I was leafing through Murder Dog magazine, a publication that focuses on the West Coast and Down South. In every issue there are ads for literally hundreds of records that will never get any play outside their region. Then again, you have rappers going from local to global all the time. To really know where these people are coming from, to see them coming, a site like ours should have local correspondents who let us in on all the little regional secrets. We’re not quite there yet. And so we sometimes review something we’re not too familiar with.

You see, the ideal rap reviewer would be familiar with all the gossip but still be able to focus on the music, know every record there is but still not get tired of it all, been there when hip-hop began in the Bronx but still feel like he just discovered this great music for himself, understand every word being said, know all about production techniques, know all the b-sides, guest and mixtape appearances, be critical but not too critical… So you see that there is no such thing as the ‘ideal rap record reviewer’. Just like you, the readers, we’re all coming from different backgrounds, causing us to view records differently. But thanks to the artists and labels who send us their products we get exposed to sounds we might never get a chance to hear otherwise. Like everything else, reviewing rap records is learning by doing.

Turning to this review’s leading lady, the simple reason why I’m reviewing this album is because I reviewed her last one. Back then Rasheeda and her label D-Lo Entertainment had a distribution deal with the legendary Motown Records. I have reason to be suspicious whenever Motown tries to get into the rap market. After all, there used to be a generation gap between Motown and hip-hop as wide as Aretha Franklin’s waist and as broad as Biz Markie’s grin. Once they adopted to the new times and placed their destiny into the hands of people like Andre Harrell and now Kedar Massenburg, they began flirting with female rappers. My guess would be the idea was that they are less likely to stain the Motown legacy. After their first female signee, MC Trouble, tragically died in the early ’90s, they enjoyed some success with Queen Latifah’s third album before she focused full-time on her acting career. They tried to get on the new jack swing bandwagon with Michael Bivins protege Tamrock, later Brooklyn’s own Paula Perry was shortly signed, and Queen Pen was able to release her second album on Motown. Then the label’s compass pointed southward, and that’s how Rasheeda ended up on its roster. Apparently things didn’t quite work out, because in 2002 Rasheeda and D-Lo are on their own again. Motown has gone back to ‘soul’ (or what’s left of it), with a white Curtis Mayfield impersonator (Remy Shand) and a young singer who conveniently has the n-word in her repertoire (Sharissa).

Where does that leave Rasheeda? Back where she belongs. This album is strictly for fans of rap from the South. Rasheeda shouts and screams her way through her album like a cab driver through rush hour traffic. And she curses just as much. If you think Gangsta Boo, Mia X and Trina are as rowdy as Southern female MC’s get, you must have not heard Rasheeda. She’s the female version of Pastor Troy, a ranting and raving madman on the mic. Fittingly, “A Ghetto Dream” starts off with the prediction of ‘Hurricane Rasheeda’ wrecking her way across the South. And before you know it, the storm starts brewing with the slow-paced “It’s Alright”. And that’s basically the message of this crunked out album: it’s alright – unless you get in the way of Rasheeda and the gang of goons she employs. Girl is in constant confrontation mode, not afraid to resort to gun talk.

And so they ‘get to it’, with bangers like “Let’s Get 2 It (Remix)”, “We Ready”, “Jump Sides”, “Like Us”, “Who You Is”, “Let’s Get 2 It”, “Do It (Remix)”, “You Got Me F’ed Up”, “Get Buck” and “2 Nite”. Built on catchy chants with a lot of crowd participation, anthemic synthesizer sounds, beats dropping like bombs over Bagdhad, these tracks pack so much energy it’s easy to imagine them pack Southern clubs, main entrance to backdoor. “Jump Sides” is an all-city Atlanta rep fest. “Like Us” beams with Southern pride. But as you hear guest rapper Da’ Menace outshine Sheeda by a long shot and as you listen to the testosterone being released by the gang of guys on “Who You Is”, you get an idea why Rasheeda flexes such a macho attitude. She tries to get hers in a male-dominated (rap) world. Some of the more successful female rappers have done so by talking about their sex life as if they were on late-night talk radio, but not this one. She rather gets the crowd hype than the fellas horny. Don’t mistake her for some distressed damsel, the chorus of “You Got Me F’ed Up” suggests:

A few songs offer a break from the familiar hectic atmosphere but still aim for club play. “Watch Ya Self” cuts down on the beats drastically, allowing for a more smooth ride. “Say What Cha Want” contrasts between a relaxed beat and a rapid delivery, “No Parkin” and “On Dem Thangs” will definitely draw attention to any ride they’re bumped in, while “I Got A Problem” manages to transfer the emotion expressed by the rapper to a musical level. If it wasn’t for these, “A Ghetto Dream” would be strictly genre music. A trap that’s all too present when you check out the similarity between “Let’s Get 2 It” and last year’s “Do It” (which pops up as a slightly altered remix), whose choruses will have you easily mistake the one for the other.

Rasheeda, I doubt that we’ll bury her “the hottest female that ever dropped.” Lyrically, her rhymes wear thin rather fast. She gets over by her energetic delivery and honest attitude. So while “A Ghetto Dream” might be far from a masterpiece or milestone, I was able to enjoy it from start to finish. This is music you have to play loud, music that is designed to disturb the peace. It’s rap music.