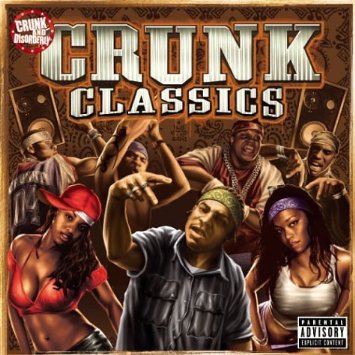 Ahhhh, crunk. Or if you prefer, krunk. It really doesn’t matter how you spell it, as long as you smell it. Unlike funk though, crunk smells more than just funky. Crunk is dirty, filthy, and nasty. Crunk is like the louder, nastier, angrier cousin of funk. It pounds just like funk, but can incite even more adrenaline in the bloodstream of the listener. It’s like comparing Stryper to Black Sabbath – while they might both be “hard rockin” per se, the latter is definitely a lot more intense.

It’s no coincidence that some of the greatest “crunk” songs in hip-hop history have had violent and rowdy names, before you even get into the actual music and lyrical content of the track itself. TVT’s new compilation “Crunk Classics” read’s like a who’s who of those rough and tough hits: Three 6 Mafia’s “Tear Da Club Up,” Hitman Sammy Sam’s “Knuckle Up,” Petey Pablo’s “Raise Up” and Trick Daddy’s “Shut Up” among others. Put plain and simple, these are not songs you would slow dance to with a beautiful woman on your arm – you’d be using that arm to throw elbows at somebody and knock them the hell out.

All a compilation has to do to really be successful is choose music that’s really good, that happens to fit the subject matter of said compilation. As easy as that would seem to be, compilation albums on the market often manage to completely miss the mark. Many waste their time with so-so songs that don’t cut the mustard compared to the more choice cuts, leaving the listener skipping around what’s little more than a few good singles and a lot of filler. Others come across like a record label’s attempt to put their own artists over, forcing their MC’s down your throat when all you really wanted was the uncut dope.

While “Crunk Classics” does feature a few of TVT Records own artists (Lil Jon and Chyna White) it by and large avoids the trap of putting over their own talent at the expense of truly capturing the best in crunk music that’s available. Pastor Troy is on Universal Records, but his classic “No Mo Play in GA” is featured. Archie Eversole is on MCA, but “We Ready” is included. UGK is signed to Jive, but their hit single “Pocket Full of Stones” is featured on the album – et cetera, et cetera. Actually the latter track, although it is a Southern classic, is one of the few that seems out of place due to how laid back and mellow the song is. It’s certainly not as militant as Drama’s “Left Right Left,” as pumped up as “U-Way” by the Youngbloodz, or as symphonically slamming as the Iconz hit “Get Fucked Up.”

As good as “Crunk Classics” is it does fall short of perfection, when you consider that certified classics like Ludacris’ “Southern Hospitality” and Cool Breeze’s “Watch for the Hook” could have just as easily been included, and might even have been better choices than Rasheeda’s “Do It” or JT Money’s “Who dat.” In fact the list of alternatives is so long it’s really unfair that they weren’t just all packed into another sixty minute disc, packaging and selling this album as a two-disc set. There’s plenty of crunk to go around, and while what “Crunk Classics” offers does meet the standards of a good compilation, it could have been even better.