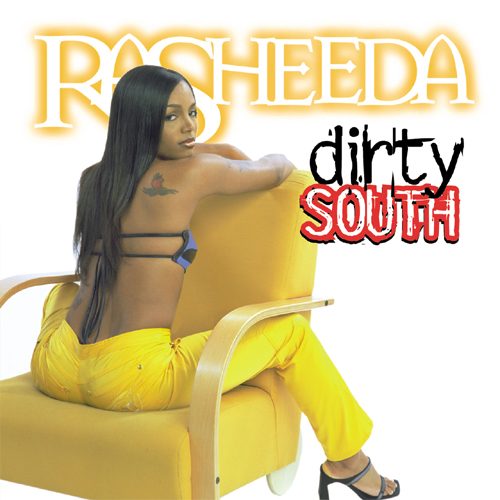 “Let’s get dirty,” suggested Redman this summer in his club banger of the same name. Well, Redman isn’t the only dirty fellow in the rap game. And I’m not talking about ODB here. For years now rappers below the Mason-Dixon have warned us how ‘dirty’ the South is. It’s to a point where you kind of expect seeing straws sticking in a rapper’s hair, and mud smeared over his face. I was actually surprised to see some of these Southern rappers looking rather ‘clean and fresh’, even if their names weren’t Dre 3000 and Big Boi. Dumb me. Here to clean the dirt out my ears is Southern Belle Rasheeda with her debut album “Dirty South”. What started with pioneering groups like the Geto Boys, Underground Kingz, 8Ball & MJG and Triple 6 Mafia has developped into an army of soldiers storming up the charts. Local labels release fresh product daily, hoping to be the next No Limit or Cash Money Records. Across the bargaining table sit the majors hoping to discover the next No Limit or Cash Money Records. Among them legendary Motown, with yet another attempt to get a grip on this rap thing (what happened to the Paula Perry LP, people?). The Southern rap artist to make it happen for them is female rapper Rasheeda. As far as her career goes, she’s not completely new to this. She was part of the female trio Da Kaperz who had an album out in 1998. In fact she’s still signed to the same D-Lo Entertainment, just backed by Motown and its distributor Universal now. “Dirty South” was scheduled for a 2000 release, but for once there was a good reason to postpone this release as Rasheeda was expecting a baby boy. From the jump, when you hear her introducing her album, you can hear that experience in her voice. An experience that encompasses rap as well as life in general. I guess maturity and maternity have the same root syllable.

But hold up, what would a rap album be without some wilding out, let alone one from Down South? After all, these people invented the word ‘crunk’. I’m not sure what ‘crunk’ exactly means, but I think it’s safe to say that it doesn’t describe leisure activities in the old folks home. Starting off with the lead single, “Do It”, with Pastor Troy, Que Bo Gold, and Re-Re all guest-starring on this multi-layered anthemic track, Rasheeda proves she can act as ‘unladylike’ as Mia X when she first came out. She makes sure she feels like the only female in her crew too (like Gangsta Boo, Trina, Mia X), by inviting everybody from Jim Crow, Thugz Nation, Jazze Pha, Lil Jon & the Eastside Boyz and Nelly to singers Slim of 112 and Akon to her album. So much for a solo album. That’s why “Dirty South”, true to its name and occasionally living up to it, is more representative of the popularity of Southern rap than of Rasheeda the rapper. Most cuts on here could have been written by any sassy shawty as she alternatively calls out those she doesn’t want to be associated with (“Ain’t Nuttin”, “No Trust”) and those she does (“Block to Block”). What furthermore takes away from Rasheeda being able to develop her own identity is the fact that she sounds different on damn near every song. Artistically this may be quite an achievement, but as far as establishing her own identity goes, her recognition factor might suffer from such vocal diversity. At least one thing you can tell: that she’s from that Dirty Dirty. The same goes for the tracks. Whether it’s the slow grind of “Ain’t Nuttin”, Jazze Pha’s twist on Ice Cube’s “We Be Clubbin”, “Off da Chain”, the cruising “Block to Block” that’ll have you feeling the air stream, Nelly adding his trademark sing-song style to “ATL 2 STL”, the shifting beat patterns of the otherwise poppy “Make it Hot”, the hi-hat-driven “They Don’t Understand”, the moody organ on “No Trust”, or the eerie chimes of “What Cha Workin’ Wit”.

But the experience and maturity I mentioned earlier have to shine through somewhere, not just merely show in tracks everybody could have come up with. In the relationship department, there’s “Get It On”, where she insists on being independent and tells her lover to “get on in” where he fits in in +her+ life. On a similar note there’s “Mr. Baller” that has her saying thanks but no thanks to a former patron she has used as a stepping stone and that now merely gets stepped upon. Is this a cool chickenhead anthem or what? A little reasoning will always be beneficial to a rapper’s resume, and maybe Rasheeda should have engaged a little more in it. In that regard, “Everywhere I Go” is the deepest cut on here:

“I sit back and meditate on the things I done
and think about all the games I lost and I won
and realizin’ that things ain’t what they seem to be
and lookin’ in on this game it’s a mystery
Niggas be ballin’, Cristalin’ and all that bullshit
Never know how long it’s gon’ last or is it legit
Wanna stay out of them streets but this shit still a hustle
can’t trust a nigga for real, even if they say they love ya
I had to learn the hard way, now is y’all feelin’ this?
Now you can’t play Rasheeda, nigga, I’m too trill with this
That’s why I fucks with no nigga as far as I can see
cause everywhere that I go they got tricks up they sleeve”

She gets even more lyrical on the similar “No Trust”:

“I take a minute to get in it, let this game unfold
Who put Atlanta on the map and now we’re platinum and gold?
now who contendin’ with these heavyweights (flow for flow)?
who got yo nigga actin’ single at my (sold out show)?
Been in the game runnin’ game, nigga (know that)
and seen the tightest to the lame niggas (fall flat)
These streets is watchin’ all you paid niggas (so don’t chat)
with all them fed time laid niggas (naw, now fuck that)
You won’t be rimmed up and hemmed up, nigga, fo’ sho
This major paper got you feelin’ like you in control
Take a minute, think about it, need to slow your roll
lost your focus, hocus pocus, you done (sold your soul)
for some small change, mind frame got too swoll’
Before you know it you gon’ blow it, nigga (no mo’ dough)”

Even when Rasheeda’s telling us she is the shit (“I Am Da Sh…”) in a baby-girlish voice, she comes clean. The fact that she keeps her lyrics considerably clean may have been the reason why she got picked by Motown in the first place. But don’t get it twisted, she can be as bad as any bitch: “I be Rasheeda / number one bitch, rap diva / and I’m harder than a dick when I’m comin’ through ya speaker / Understand this here, do I make myself clear? / I run this damn thang and you run shit round here” (“They Don’t Understand”). With bangers like the bonus “Not Tonight”, which brings back the energy of “Do It”, that wish may just become true.