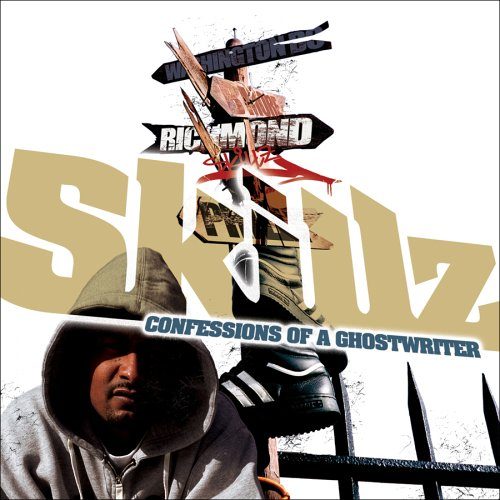 Skillz :: Confessions of a Ghostwriter

You may not know the name, but you’ve heard some of the hits that he wrote. Skillz doesn’t kiss and tell; or at least when he does on a song like the widely distributed “Ghostwriter” single twelve inch the names are edited out to protect the MC’s who top the Billboard charts (and for comic effect). Dating back far enough that some of today’s new generation of rap fans would (incorrectly) call it old school, Mad Skillz finished second in the MC battle of the 1995 New Music Seminar and promptly released the album “From Where???” to show his Virginia rap skills weren’t a fluke. You know this story already because you’ve heard it before – the album was great but it sold double lead. Some said he was unmarketable being from Virginia, but that hardly seems fair considering the massive commercial success of Missy Elliott, Timbaland, Clipse and The Neptunes all coming after him from the same state. Some said his voice was too high or nasal, but artists from B-Real to the Beastie Boys have made it work and sold massive units.

Basically the world just slept on Skillz; ironically considering he should have been pissed about it he dropped the “Mad” from his name and kept right on recording. Skillz constantly drops singles, does popular year-end “Rap Up” songs, and makes hard-to-miss cameos on other people’s records – yet it’s the songs he can’t take credit for that are most famous because other people are rapping his shit. Still a paycheck is a paycheck and like the Jay-Z quote in his underground single said Skillz is a “ghost writer, and for the right price/I can even make YO’ shit tighter.” 2005’s “Confessions of a Ghostwriter” follows up on that theme and even has some of his friends from Virginia pitching in to help him get his richly deserved props – in fact a Timbaland beat laces the opening track “Off the Wall” as Skillz punches the lines:

“I rap hard like B.I.G.
And since Jordan got bum knees kids wanna be like me
I’m in Dreams sittin with a dime in V.I.P.
You in line, dreamin ’bout gettin in V.I.P.
See we different playboy, compare me to none
You in your hard bottoms son I’m in my _Air Force Ones_
It’s like mics, once I rip ’em then I’m done
It’s too many broads in here you better get you one
Ain’t it funny what I said jumped over your head
My words walk dog, it’s like my words got legs”

The next song might actually catch people more off guard, because not only do The Neptunes provide the beat for “Suzie Q” but Cee-Lo and Jazze Pha jump on the track too. You may be asking yourself “Why wasn’t this a smash crossover hit?” Well once again the biz hated on Skillz. It’s certainly not for lack of a good hip-hop track with a good storytelling narrative:

“Aiyyo just last week I was in Club Heat
And I, observed this lady that I wanted to meet
She was the at-the-bar type, the rent-a-car type
The cubic, zir-conia star type
The type to get a drink and then babysit it
Hair weave and jeans both tightly fitted
E’ry cat in the club done probably ran up in it
Real girls be like ‘Look at that nasty bitch!’
So I walked over to her ‘Hi, my name’s Skillz’
She said ‘Can you buy me a drink?’ Sure, I will
I’m thinkin Je-sus, I got game, so I’ma hit it
That ass was like ta-dow, blaow, OWW, get it!
Ma what’s your sign cause I’d like to know
And if you game I got a spot we can probably go
But I was blind, I shoulda seen all the signs fo’ sho’
My man warned me {*Cee-Lo*: You bought to fall like Saddam-O!}”

And to complete the Virginia trifecta, Nottz comes in on the self-explanatory “Hip Hop” to make it three for three:

“Hip-Hop, we started out in the park
I used to watch cats do you ’til the sky got dark
But I knew we’d be together though, right from the start
I read a letter Common wrote you and it touched my heart
But I can’t top that, and I’ma say that now
So I made a tape I want you to play it when I ain’t around
I remember you and Ra, first came in the door
But I don’t like you now, cause you ain’t the same no more
You get ’em wealth, that’s what they attracted to
And when they get it, it never comes back to you
And it’s sad, to watch you lose your grip so fast
And when you on TV all I see is tits and ass”

There you have it. Skillz just proved why he’s a top ghostwriter for other MC’s in the first three tracks – he did a club song, a crossover track, and a provocative ode to the thing he simultaneously cares the most and is frustrated the most about. Why isn’t everybody talking about Skillz? Well for one there’s poor marketing. I didn’t even find out about “Confessions of a Ghostwriter” until over nine months after it was released, and only because I accidentally happened to stumble across a copy at a major retailer. Secondly there’s the fact Skillz is a rugged MC who loves to build with the underground rappers like Pretty Ugly on “PA to VA” and fellow VA native Danja Mowf on “It’s Like That.” Third and most significantly is the fact he “doesn’t drop singles for $8.99 or less” by his own admission, which means a lot of people simply aren’t prepared for a full Skillz album. With strong production by Nottz, Skillz himself and even Hi-Tek on the track “Y’all Don’t Wanna Do That,” there’s no doubting the music is up to par with his rhymes and flows. It’s simply a matter of exposure at this point – so if this review can get even one more person to pick up and purchase “Confessions of a Ghostwriter” it was time and effort well spent. Over ten years in the game and still holding it down, maybe the real reason Skillz hasn’t sold is that so many failed rappers work behind the scenes in the music business are mad that his name embodies the songs he writes; whether for himself or for their friends.