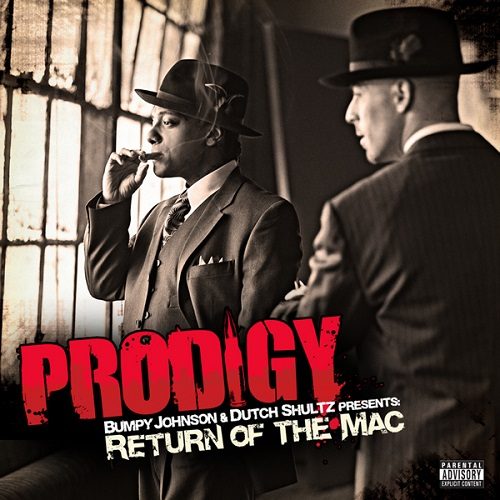 Prodigy :: Return of the Mac

“I sit alone in my dirty-ass room
Starin at candles; high on drugs
All alone with my hand on the mac 10 handle
Schemin on you niggaz”

The first notice most hip-hop fans had of Prodigy’s latest solo venture was from a “Mac 10 Handle” single that was widely released to tastemakers and YouTube. The song is instantly catchy and memorable for two simple reasons; the first being that Prodigy is referencing an old school Geto Boys classic called “Mind Playing Tricks On Me,” and the second being an old school beat that references Ice-T’s classic “High Rollers.” It would be hard to go wrong with either one individually; together in the hands of Prodigy and his producer of choice Alchemist they’re deadly.

“By myself in my four-cornered room
Watchin ‘Hard Boiled’, I feel like I’m crazy
My brain on drugs, my bulletproof on run
Flax; later tonight I’ma look for cuz
Just ride through his hood and when I see that chump
I’ma jump out the truck, and dump my gun
You ain’t never been through it, so you scared of that kinda shit
Hear me on the song and say, ‘P pop a lot of shit’
Too much of that gangsta music – NAW
This reality rap, I really go through it
In interrogation rooms, I don’t crack
Nigga I got nothin for ya, talk to my lawyer”

Prodigy goes a long way on this album to distance himself from the mistakes made on “Blood Money.” Having Alchemist produce almost your entire album is a good starting point, but it’s more than that. The G-Unit sound is entirely gone from this album, in fact they are virtually non-existant other the shoutouts of the liner notes. As it was in the beginning, it is now and ever shall be. With no offense to 50 or his crew, Havoc and Prodigy didn’t need any of their help putting Queensbridge on the map with a successive string of underground hardcore New York hip-hop albums so dirty and grungy they were often imitated but never duplicated. G-Unit’s producers watered down the Mobb Deep sound and G-Unit’s guest rappers watered down their unique steelo and self-annointed “dunn language” even further. Prodigy eschews all of that for a back to basics approach and Alchemist is right there by his side riding shotgun, even going so far as to appear on the album cover. At first you might think that’s absurd; and in fact the artwork itself us a little too over the top with sepia tones and mobster suits, but at the end of the day A-L-C deserves a very fair share of the credit for why this release works. The beats are slow, methodical, soulful and head-nodding, matching the laconic rapper P almost perfectly. “Bang On ‘Em” is New York rap to sip sizzurp too at least metaphorically speaking, as is the aptly titled “Legends”:

“”Gangsters don’t die, we just turn to legends
All we go through is hell, what the fuck is a heaven?
We live fast and stall death as long as possible
Get our cash and put threats in the hospital
Young P, when I was 13 I had dreams
To do what LL did, and Run-D.M.C.
Dirty lil’ fuck, learnin how to aim my pee
Older niggaz in the hood used to try to thug me
‘Til pops gave me a knife, told me handle my thing
And if not, when I came back, he would handle me”

P takes his time to get where he’s going, but the great advantage he has with that methodology is that each word carries more weight and impact, becoming memorable and highly visual. The closest he gets to fast paced is the self-titled track featuring 2Pac samples, which sounds like an updated version of Busta Rhymes’ “New York Shit” with extra ultraviolence thrown in for emphasis:

“Get on my New York shit
And show these muh’fuckers what New York is
12 homicides in a New York minute
Take a trip up top, for a New York visit
N.Y.P.D.; New York Pricks and Dicks
Heard you workin with the D’s, you a New York snitch
I’m tryin to make a hundred mill’, that’s New York rich
Back and forth to Philly with these New York bricks”

Yes it’s fair to say that Prodigy is one in an ever long line of rappers who boast about their gunplay, booze drinking and pharmaceutical prowess, but Prodigy has the advantage of being a veteran in the rap game considering some of today’s young rappers were probably still in diapers when “Juvenile Hell” dropped. With the track record to back up his O.G. status and a style developed through that long time that still works, “Return of the Mac” is everything that “Blood Money” should have been and wasn’t. Rest assured Mobb Deep fans, they may be dwelling in “The Rotten Apple” but by the time this CD ends you’ll go to “7th Heaven” so “Stop Fronting” and this reviewer will stop quoting song titles at you. Be sure to pick this one up at Target as it contains a bonus DVD with four music videos. Welcome back to your highness, Queensbridge’s finest, you rewind this, Alchemist is behind this.