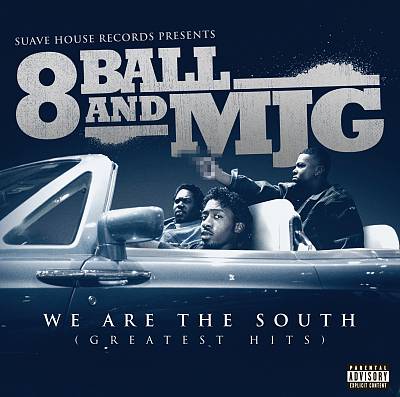 “We influenced the world with this shit
Every nigga in the South learned somethin from the Suave House
We was +Comin’ Out Hard+
We was +On the Outside Looking In+
+On Top of the World+, +Lost+
+No More Glory+ and +In Our Lifetime+ (nuff said nigga)”

The point being made in the introductory track of 8Ball & MJG’s “We Are the South (Greatest Hits)” is chock full of validity and completely moot at the same time. Any purchaser of an 8Ball & MJG “Greatest Hits” album is undoubtedly aware of their influence on a whole generation of hip-hop artists (and not just in the South) and their staying power in a genre where rap groups come and go – sometimes breaking up before their first album even reaches retail. Through fifteen years of hustle, hard work and friendship this Memphis duo put the city of Memphis and their neighborhood of Orange Mound on the map. Even when they’ve done side projects and solo albums, the team has always reunited to drop cult classic rap albums to please their loyal fans. They are more than just “The South” – they are HIP-HOP.

“We Are the South (Greatest Hits)” is the kind of curiosity that often results when a popular group with a long track record offers a compiltion of hits or favorites. We’ve seen this before on albums like OutKast’s “Big Boi & Dre Present…” and Juvenile’s “The Greatest Hits.” In the case of the former none of the songs “presented” were all worthwhile yet totally unnecessary given the strong likelihood any OutKast fan would have owned all of the songs save for the new tracks used as bait. In the case of the latter there was a strong chance to showcase the early work of a rapper who was popular locally before he blew up nationally, but they missed the mark on that score AND on collecting his “Greatest Hits” – an EPIC FAIL all around. It’s the ultimate catch-22 for any kind of album, where you can do it right and be irrelevant or do it wrong and be totally unnecessary.

8Ball & MJG’s “We Are the South” tries very hard to straddle the line between being true to their hip-hop legacy and appealing to anybody who wasn’t already aware of said legacy. Take for example two of the first four songs on the album chosen from their “On Top of the World” album released in 1995. “Pimp in My Own Rhyme” was (to my knowledge) never an official single for radio yet remains to this day one of the defining and arguably most popular songs of their career.

“These bitches be poppin game – and wearin they niggaz clothes
Scandalous groupie big choosy booty outrageous hoes
Bitches and backrubs – bubblin bathtubs
Luxury hotels – executive strip clubs
A natural born break-a-bitch scholar
Holla if ya hear me, step off if you trick busters fear me
Hear the, pimp speakin, for all and each and
And each and all, now break ’em off somethin Ball
What’s next, much real shit, comin from the two
Pimp niggaz who survived, comin up payin dues”

“Space Age Pimpin'” is as smooth as “Pimp in My Own Rhyme” is hard, and both songs are expertly produced by T-MIX. The fact these two songs existed side by side on their own album let alone on this compilation is proof of why Ball & G have such enduring popularity. The Memphis duo stay real with hard talk while easily suaving it out to broaden their appeal without trading any of their hardcore credibility in the process.

8Ball: “You and I, me and you, situation gettin sticky
Your mouth is sayin no, but your body’s sayin stick me
Lick me, don’t be, afraid of what yo’ friends say
Rappers get that ass then be outta here like yesterday
But not tonight, you look so tight, it feels so right
This indo got me pervin let’s go hop in my Suburban
And ride ’til we get to where you want to be no matter how far
Just call me Ball baby, to me you’re the superstar
Ask me time and time again why did I choose you
Do I wanna be your man or just misuse you?
I hear your partners dissin when they think I ain’t listenin
Them hoes just be wishin they could be in yo’ position
With me in luxury I got to be everyday
Chiefin hay with somethin stout wearin lingerie
Let’s hit the ‘tel, get a suite and order somethin to eat
Tell me things about you, I’ll tell you things about me
Then out the blue I’ll be caressin you, undressin you
You start doin all that shit you said you’ll never do”

An above average cross-section of the volumnious 8Ball & MJG catalogue is represented on “We Are the South (Greatest Hits).” While even a two-disc set might have been hard-pressed to tell their full story, it can’t be argued that the songs chosen for this one represent the group poorly. “Paid Dues” from “In Our Lifetime” has Cee-Lo on the hook and an Organized Noize sound despite being another excellent T-MIX production, while the same album’s “Throw Your Hands Up” featuring OutKast actually DOES have O.N. production. Surprisingly songs from solo albums are included too, such as Eightball’s “The Artist Pays the Price” from “Lost” and MJG’s “That Girl” from “No More Glory.”

If there can be said to be a drawback to this compilation it’s that you won’t find more of the work from their Bad Boy South era, so more recent hits like “You Don’t Want Drama” or “Relax and Take Notes” are not included here. Nevertheless what’s included goes out of its way to represent the long-time rap veterans, even branching out to pull Tela’s “Sho’Nuff” for an appearance, a song which arguably is Ball & G featuring him instead of the other way around over some smooth Jazze Pha sound. It’s that dedication to collecting MOREthan just their hits and singles while at the same time picking the RIGHT tracks that makes “We Are the South” one of the most worthwhile “Greatest Hits” compilations to come along in more than a minute.