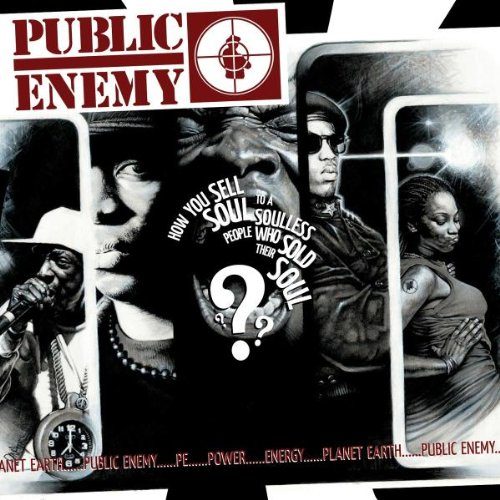 How To Sell Your Soul...

Public Enemy :: How You Sell Soul to a Soulless People Who Sold Their Soul

Don’t call it a comeback! They’ve been here for years. While PE, with the exception of the “He Got Game” soundtrack, have been below the radar for a long time, they’ve been releasing albums fairly steadily for over twenty years. It is fitting, however, that exactly twenty years after their passion break out, “A Nation of Millions,” that Public Enemy sound more alive, more intense, more vital, than they have in over a decade.

Maybe it’s the recent spotlight Flavor Flav has been under on VH1 pseudo-reality shows. Or maybe it’s the 20th anniversary of “A Nation.” Or maybe it has nothing to do with either. Whatever the reason, something has lit a fire under Chuck D and the entire group, and they’ve responded with one of their better albums to date. “Soul” is a notch below their classics from “A Nation” to “Apocalypse,” and a step above everything else they’ve released.

“Soul” captures P.E. at their best: loud, political, and very angry. The production here bangs as hard as any rap release this year. When Chuck asks, “Can You Hear Me Now” it’s a rhetorical question, because any hip hop fan will hear them banging in their speakers for years. The Bomb Squad handles this magnificently, bringing a huge variety of influences into their music. They update their 80’s sound without giving into newer trends in hip hop. At the same time, they’re not afraid to try new things: the echoing beat of “Escapism” is as unique as anything you’ll ever hear, and it works magnificently. This isn’t an album for your headphones, this is one to blast on the speakers.

But as much as the production of Public Enemy is what lends the spark to this album, it only maintains the fire when Chuck D is in full form as the focus. Thankfully, he comes out the gate with guns blazing. Chuck has as much power here as he’s ever had. If he’s been angry, he’s enraged now. From the very beginning, “Soul” comes across as Chuck is literally trying to save the world with his rhymes, his voice at a loud pitch just short of a scream.

At the same time, an hour is a long time to maintain an album at a fever pitch, and so P.E. wisely tones down the album as it progresses. The meets with mixed results: while they do it very gradually and skillfully, it does result in a short middle span that seems to lose some direction. They’re at their best at the beginning and end of the album, where the hard, and slower tempos come with a purpose. The middle seems to exist only as a transition between the two, and while well done, the songs themselves are the weakest of the album. That said, the transition itself works excellently, never leaving the listener feeling at let down while the momentum slows.

On the subject of let downs, KRS-One makes a star appearance on “Sex, Drugs, and Violence.” KRS-One rips through the track, as inspired as Public Enemy sounds, setting up the perfect scene for another great Chuck D verse… only to be followed up by Flavor Flav instead. He does well for himself, but there’s no question as to who would have been preferable here. Flavor Flav in general seems to be on too much here as well, having three songs to himself. “Col-Leepin” is actually very good, but the rest are just long interludes to the real show, and slow down the action considerably.

These flaws aside, “Soul” is everything a fan could expect from a Public Enemy. It’s as intense, as angry as their greatest albums were, while showing their growing maturity as artists. It succeeds both as an album and as a collection of songs. This is the most satisfying P.E. album in over fifteen years, both a throwback to their glory years and a hopeful sign of more great years to come.

Public Enemy :: How You Sell Soul to a Soulless People Who Sold Their Soul
9Overall Score
Music9
Lyrics9