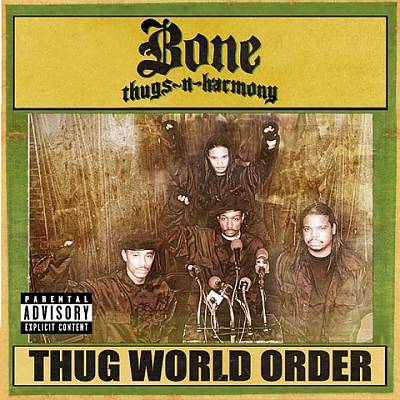 Personally I can’t speak for the other reviewers on the staff, but as for myself I certainly have nothing against Bone. In fact, I’ve been a fan ever since they first signed with Ruthless Records under Eazy-E (God bless the dead) and released their “Creepin’ On Ah Come Up” EP with the single “Thuggish Ruggish Bone.” At the time I thought they had a unique sound and harmonized flow unmatched by any other group in rap, and over the last decade I’ve watched countless scores of groups and artists try to achieve their success by imitating their sound, often with limited results.

If there’s one particular reason more Bone albums aren’t reviewed on the site, it’s simply because the site as such was conceived late in 1999. Even though we include reviews archived from OHHLA.com and HEADz UP! magazine that appeared before that date, a lot of contributors to those ventures had an understandable animosity towards commercialized (mediocre) major label rap albums, and didn’t have much interest in reviewing Bone. Your humble editor can’t force people to get into shit they simply aren’t, and since this is a privately funded site where anything we aren’t comped by the labels comes out of our own pockets, what’s a brother to do?

Fortunately for the Bone Thugs fans, I had the good fortune to be in the record store today when Bone released their first NEW album of original material in several years, combined with the fact it was on sale. For one reason or another, this is the first actual Bone (not solo) album I’ve purchased since “E. 1999 Eternal,” but I’m sure it fits well into their catalogue of work over the years. All of the trademarks are there now that the crew has overcome their internal disputes and reunited: Layzie is quick tongued and verbally nimble, Bizzy is the high-pitched thugster who immediately catches your attention, Krayzie is the thinking man’s gangster, and Wish is the down to earth member who provides the glue that sticks them all together. They each combine together in typically grand fashion over “Get Up & Get It” featuring 3LW, although in my opinion Krayzie steals the show:

“You betta get on yo’ grind
You betta go get it if you really tryin to shine
You betta be keepin yo eyes on yo’ prize at all times
Keepin it real for my all of my thugs in the projects
The niggaz that ain’t got shit
Not havin this nonsense, my niggaz
My momma say, ‘Boy if you ever wanna be anything
Get off the couch and out my house, use your brain’
So I took heed and I jumped right up on my feet
Got off the streets and I’ll be
In heat I’m laughing at police now”

Bone typically mixes a boiling cauldron full of singing, seriousness, fat beats and comedy to arrive at the witches brew of a complete album. All of these facets are represented on “Thug World Order”: the lightheartedness of “Bad Weed Blues” produced by Bosko, the hardcore harmonizing of “What About Us” laced by Armando Colon, and the straight Cleveland gangsterism of “Pump, Pump” from Bone and Alvin ‘Stone’ Clark. Of course, it wouldn’t be a Bone album without their main man DJ U-Neek, who laces smooth tracks like “All the Way” and the rhythmatic Phil Collins style drums of “Home” to ample effect. The highlight of most Bone albums is the way they combine a uniquely musical rapping style over tight beats, and “Thug World Order” does not dissapoint in this respect. Even old school rapper and producer Def Jef laces them up nicely on the explanatory “Set it Straight.”

Will this album be a success for Bone? That’s hard to say. The rap sound has changed a lot since the mid-90’s, and a score of wannabe Bone Thugs have watered down the sound they pioneered and rightly deserve the credit for. This album carries on both the Ruthless Records and Eazy-E legacy in fine fashion though; because from the opening “T.W.O. Intro” to the closing “Thug Soldier Conversation” the sound is as pure to the debut of their first major label EP as anything they’ve done in their whole career. Whether or not you’re into the harmonized musical flows of Bone Thugs-N-Harmony or not, their true fans won’t be dissapointed – and neither was I.