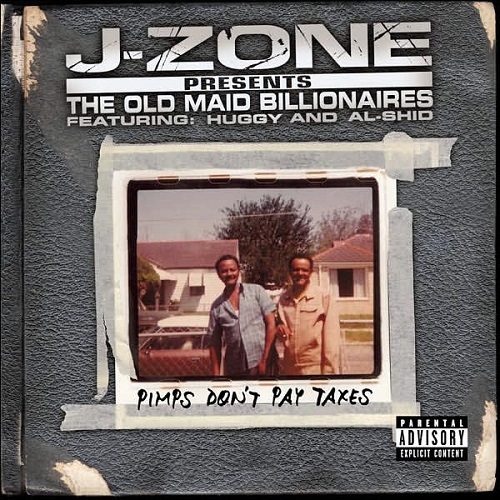 For once RapReviews.com can hand out one of them damn late passes to itself. We overlooked J-Zone’s third opus, “Pimps Don’t Pay Taxes”. It’s been out for over a year, but devoted followers of J-Zone and his Old Maid Billionaires already know that the beats and rhymes provided by these gentlemen keep a little longer than the perishable goods advertised on your favorite music channel.

Those already familiar with the phenomenon J-Zone will also be pleased to find out (or were pleased to find out a year ago) that Zone is still doing anything to get actress Lucy Liu’s attention, that Pimp Palace East is still where he’s at, that he still considers Duck Hunt a state of the art video game, that the hip-hop disciplines breakdance and graffiti still aren’t his forte, that he is still an AIDS campaigner’s nightmare, and that he still hates hooks. The only thing new is how Ms. Platonic loses her noble title.

Have no idea what I’m talking about? Well, let me introduce you to J-Zone. He’s the producer that started to rap because he found no one to rhyme on his tracks. He’s the guy that puts his thugged out grandmother on his album covers (not this one, though) instead of himself. He’s the underground hero that would much rather be the underground’s anti-hero. At least that’s what can be deducted from statements like “Here comes the Zone up the ave rollin’ in his pimp Caddy / backpackers wave while I pump that Trick Daddy” and “Roll through the ghetto pumping ‘Ice Ice Baby’ / Think I give a fuck? It’s better than the shit I heard lately.”

That’s obviously debatable, but with some of the stuff passing for hip-hop nowadays, you won’t embarrass yourself when you get caught listening to J-Zone. That’s if you can stand behind dope beats and the time-tested ‘I don’t give a fuck’ attitude that has given us so many classic hip-hop joints. As he stresses several times, J-Zone is proud to be a cheapskate. But despite confessing, “even when I beat-make the Zone’s bein’ cheapskate,” he has mastered the art of being low budget to a point where the one thing he can really take pride in is how fresh and crisp his tracks sound.

Zone is quickly becoming known for digging up some of the most thrilling bits of music and looping them into perpetuated dopeness. Combining the humorous flair of The Beatnuts with the musical mastery of DJ Premier, Zone carries on the torch for the near extinct craft of matching the sample with the right drum beat. No “synthesizer beats” here, according to Zone the only Casio +he+ owns is his imitation Rolex. Instead, you get perfectly timed beats who give away the beat programmer who knows when and where to strike. Each track on this album is like a choreography where everything moves in unison and every sound has its designated role to play, scratches, samples, snippets from movies and instruction records – and the rhymes, of course.

Right from the start it all makes sense. “Model Citizens” (which on other records would be referred to simply as ‘intro’) introduces the crew. You get tracks like these all the time, with the names cut up, comments thrown in. But the way it’s done here, the pieces of the puzzle fit together so well that even though Zone strings up short snaps from almost as many sources as there are comments, you get the feeling that they were meant to be arranged in this order and meant to be on this intro.

It’s a feeling you get throughout this album. Upping the ante on all levels on 1998’s “Music for Tu Madre” and 2000’s “A Bottle of Whup-Ass” (but still appropriating two cuts from the latter), Zone, Shid and especially the much improved Huggy move way beyond the ‘crews to watch’ status. If Zone decides to carry out his threat to retire from rapping after this album, the rap game is about to prematurely lose a very gifted player. The crew collectively shares mic duties, Shid and Huggy make substantial contributions, but Zone is clearly the team’s center.

Follow him as he publicly proposes to Lucy Liu (“Q & A”), talks openly about how condoms ruin the little bit of sex life he has left (“The Trojan War”), disses “headwrap chicks drinkin’ wheat grass juice” (“The Bum-Bitch Ballad”), acts resolutely when encountering cockblockers (“You Block, You Bleed”/”Block Itch”), enjoys a day free of consequences (“No Consequences”)… the list goes on. When it comes to topics, a lot of the situations described here we’re familiar with from other rap records (“Jailbait Jennifer”). But it’s the way that Zone and company tackle these topics that makes this album stand out. In short, “Pimps Don’t Taxes” may be the nearest thing to how rap used to be when people like Ice-T, Ice Cube, Big Daddy Kane or L.L. Cool J actually made dope records. Records that were to their own liking.

What renders his attitude so refreshing is that J-Zone’s giant middle finger goes out to everybody and that it’s free of the bitterness that often comes along with it in rap. He may hold a grudge against anything and anybody, but he’s so kind as to give us the friendly, or at least the funny version of his fuck-you.

It’s too late to include “Pimps Don’t Taxes” into last year’s list, but you owe it to yourself to stop sleeping on it. Because if there is such a thing as a blueprint for good ol’ hip-hop music, it comes to life on this record. And yes, chances are that some people may be offended when listening to it. That’s part of the deal. That’s rap. If you don’t like it, J-Zone will tell you what to do. So much I can tell you: his answer will be short and it will include a four letter word.